Speedway Racing from Super Powerup Games is, as expected, a racing game that has you taking on six speedways to see if you have what it takes to be #1. Races will have 20 vehicles, and you will need to find the best route to become the leader of the pack as you put the pedal to the metal. At first, you will only have two vehicles available for racing: Black Knight and Blue Thunder. Each of the cars will have different stats in Speed, Acceleration, and Grip, which will change how they handle out on the tracks. As you play, you will be able to unlock eight extra cars – BAR-NA 92, Hurricane, Sunset, Phanter, Scarlet, Outburst, Flash, and Radiant -, offering some variety to the pool of vehicles you can take out for a spin. You can also select between an automatic transmission or a manual transmission, depending on your driving style. 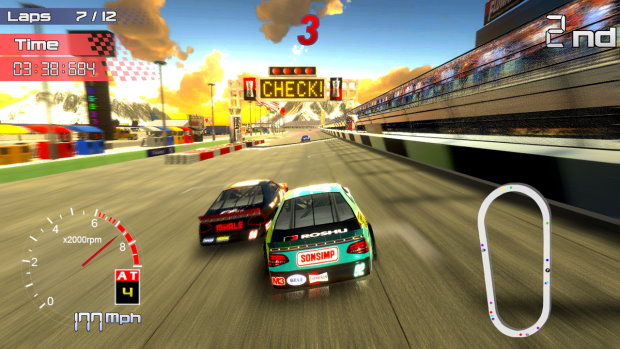 You’ll steer your vehicle with the left analog stick or the D-Pad, accelerating with the R button or breaking with the L button. You can gear up or down by using the ZL and ZR buttons, or by pressing the B or Y buttons. If you want to check what’s happening behind you, press the A button to see the rear camera. Your car can respawn when it comes to a stop, and the “Respawn” message appears on the screen. To do this, you can simply press in on the left analog stick or the right one.

The game will offer an Arcade Mode, a local Multiplayer Mode, a Time Trial Mode, and the Championship mode. Arcade Mode will allow you to race on each of the six tracks that the game has to offer: Orlando, Atlanta, Boston, Phoenix, Sacramento, and Seattle. For Arcade Mode, you’ll need to complete each lap as fast as possible, since you’ll have a timer counting down, and completing a lap will add some extra time to top it off. Time Trial Mode has you competing on each of the aforementioned tracks to see if you can get the best time possible. In Multiplayer Mode, up to four players can race locally to see who’s the best. 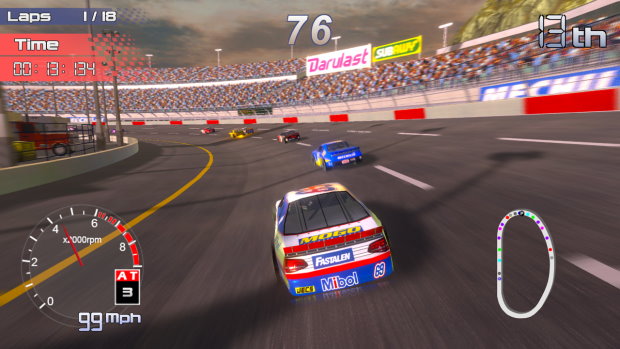 And then, there’s Championship Mode, which is a special mode in which you’ll be able to compete in one of two cups. The East Cup has you racing on the Orlando, Atlanta, and Boston speedways to complete twelve, ten, and eight laps, respectively. The West Cup includes the Phoenix, Sacramento, and Seattle speedways for fourteen, twelve, and ten laps, making it longer than the East Cup. Depending on what place you finish each race in, you will get some points. Win as many points as possible, and try to finish in the top three! 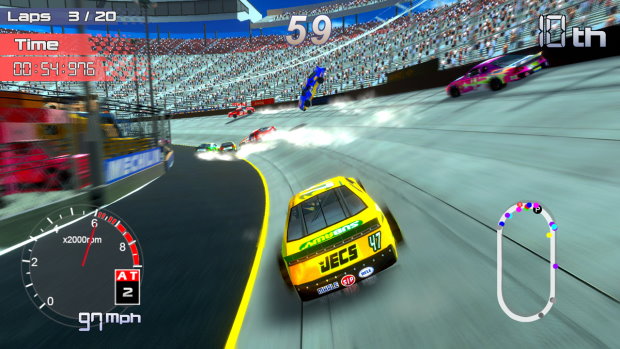 Speedway Racing had potential with its arcade-style take on the “race to the left for many laps” genre, but something feels off. If an opponent so much as looks weird at you, then your car will turn around and end up forcing you to respawn, costing you some valuable seconds in Arcade Mode and Trial Mode, and making you lose a spot or two in Championship Mode. I was also expecting the framerate to be higher due to the game’s graphics, but 60 frames per second racing it’s not. Speedway Racing is out on Nintendo Switch for $9.99. 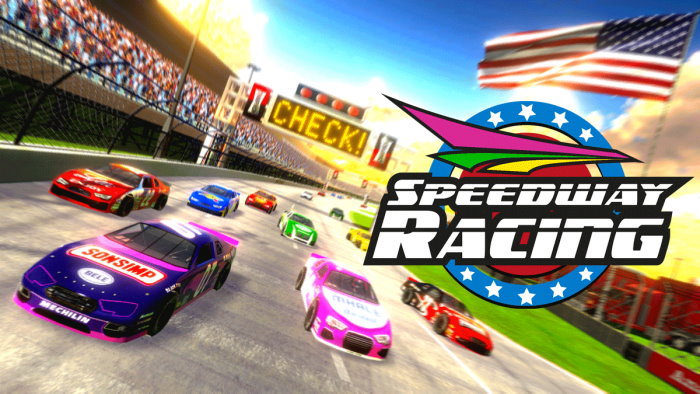 Disclaimer
This Speedway Racing review is based on a Nintendo Switch copy provided by Super Powerup Games.

Jump King Out Next Week On PS4 And Nintendo Switch