In Atomicrops from Raw Fury and Bird Bath Games, you are the owner of the last farm in a post-apocalyptic wasteland, after you inherit it from your late grandfather. Your land has now become the only source of food for the nearby town, and in this radioactive future, you must do whatever it takes to survive in this farming sim/roguelite action game as you try to plant and harvest ultra-GMO – genetically modified organisms – to be able to feed the town so that no one goes hungry. 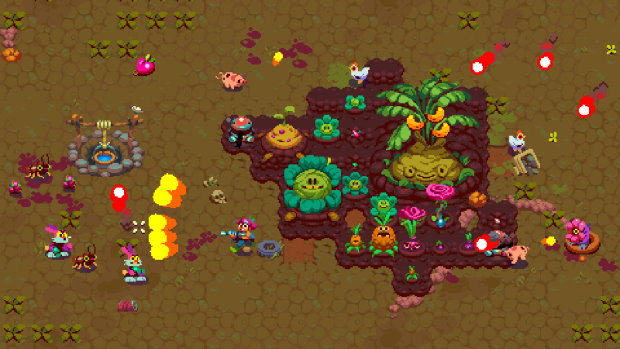 You will control your character with the left analog stick as you aim with the right one and shoot with the ZR button. You can interact with items with the A button, and this is how you will grab what you need to plant, water, and harvest what you will grow in your farm. You’ll farm with the ZL button and harvest with the B button, fertilizing the land with the A button – and watering it – as needed. Your land will be safe during the day, but once it starts to get dark, you better be ready to defend your land from mutants!


Your run will start with a single character for you to select: Lavender. She will start her runs with two bees, as well as a 20% boost on how fast her crops will grow. By progressing through the game, you’ll be able to unlock more two more characters based on your performance, who will change how you approach things. You’ll be battling against giant slugs, burrowing mutated worms, some very large bunnies that are packing deadly laser guns, or octopi that have decided to use chemical waste drums as their shells, to name some examples. 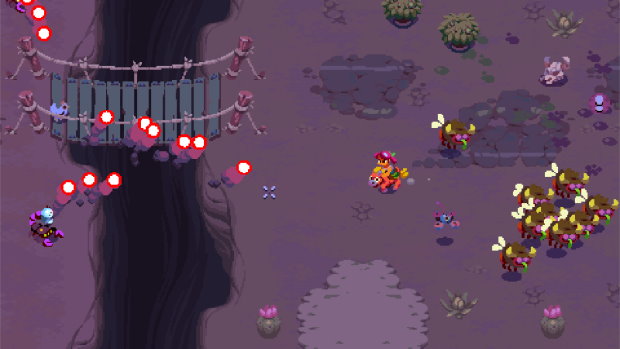 Once you survive a day out at the farm, defending your crops, you will be able to return to the town, where you will sell your genetically-enhanced produce to earn cashews. Cashews are the game’s currency, and it can be used to purchase things such as a bridge repair kit to open up paths to new areas to explore, to buy new weapons that can deal extra damage to enemies or better seeds to plant in the farm which will require some extra care on your end but will yield a better profit.


Progressing through the game’s seasons – with each season lasting a few in-game days – will give you a chance to talk with the Mayor so that you can get a tally of how well you did, as well as open up more of the town for you to visit, thus also opening up more stuff for you to spend your hard-earned cashews and delicate roses for potential spouses. But before you can end a season, you’re going to have to defend the farm – and your life – from a big bad boss! During the boss battle, you’ll fight a considerably larger enemy with a big health bar at the center of the screen, while you still protect your crops from several waves of regular enemies, so you’ll need to be on high alert as you learn a boss’ movement and attack patterns while avoiding the attacks of regular enemies. 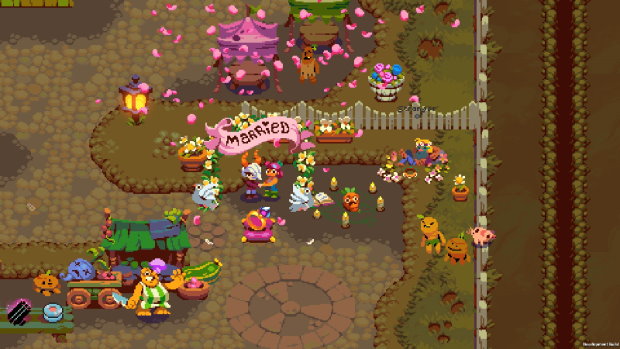 Since this is a farming simulator that pays homage to the old-school games in the genre – such as Harvest Moon – there’s also a romance side to the game. You’ll be able to meet NPC in the town with whom you can flirt as you try and find a suitable mate that could make for a good spouse. To do this, you will need to end up giving one of said NPC many roses. The more roses you give to a potential candidate, the more your relationship will grow up until they become your spouse. Depending on who you pick, they will also bring some additional skills to the table, which will boost your performance.


You can spend your day tending to your farm, or you can balance things out and also explore the surrounding areas. Doing this will allow you to find enemy camps that you can attack. Once all enemies are gone, you can select between two rewards that will either boost your performance at the farm or add a powerful pigeon scroll that can be used with the Y button. The effects of the scrolls can vary, but they will always be of great use since they could increase your land’s yield or give you a faster harvest. You can also obtain upgrades for your farm that can make a huge difference, such as turrets that can protect your crops while you’re away! 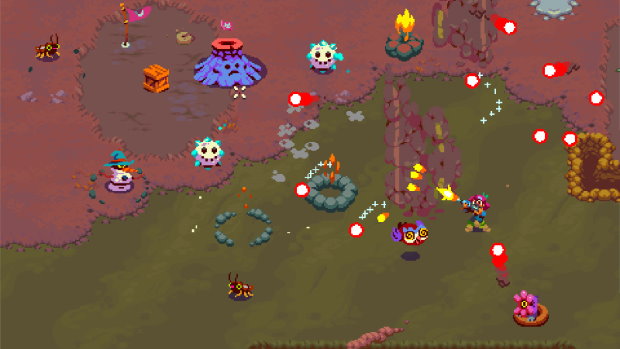 Atomicrops features an in-game achievements system so that you can aim at completing objectives as you work towards seeing everything the game has to offer. You can get these for completing things such as harvesting 144 potatoes in a 10 seconds period, killing 100 beeson during a single run, killing all biome Tree Monsters during a single run, having 5,000 cashews on you, making it to the end of years one, five, and ten of a run, and more. It’s certainly a challenging list that you won’t be able to complete in your first run.

Atomicrops is a very fun farming sim twin-stick roguelite shooter on Nintendo Switch with an addictive gameplay cycle, a ton of enemies to defeat, bosses to battle, crops to plant, tend to and harvest, many items to purchase or collect, upgrades that last during your run, permanent upgrades that can make subsequent runs easier, and different potential candidates to become your spouse. Atomicorps is out now on Nintendo Switch for a $14.99 asking price.

Disclaimer
This Atomicrops review is based on a Nintendo Switch code provided by Raw Fury.

[PS4Blog.net Interview] Matt Glanville On Ghost Grab 3000 and Singled Out