Become the hero… after, you know, accidentally murdering the original one. Take the sword and retrace the hero’s steps from behind enemy lines in our Underhero review!


Underhero is an RPG-platformer where the chosen hero has failed, and an underling of the evil king reluctantly takes his place as the new hero. Use timing-based combat to defeat enemies as you venture across the land, face off against quirky bosses, and save the Chestnut Kingdom from your own evil boss, Mr Stitches!

Key Features
A side-scrolling RPG adventure, complete with lush pixel art and cartoony aesthetics
Jump, slash, evade, talk, and bribe your way through a fantasy adventure with a satirical twist
Turn-based combat… without the turns! Precisely timed actions are your most powerful weapons
Level up, solve puzzles, find secrets in a world full of friends, foes, and weird inhabitants
A wonderful original soundtrack composed by Stijn van Wakeren
A story full of humor and mysteries awaits!

Underhero is a very interesting RPG that places you in the role of a minion of the Big Bad Boss, and you actually kill the hero of the story at the start of your would-be adventure! The hero’s magical sword, distraught and not knowing what to do, decides the only thing do is to latch onto the minion who killed the hero. It’s an interesting premise that finds humor in the situation even though the hero – whom you play briefly as at the start – is killed by way of a falling chandelier. 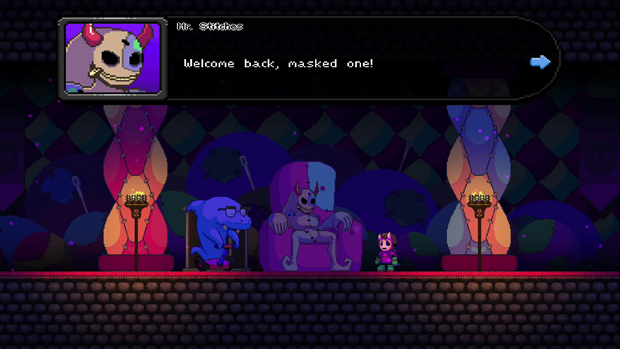 Since the hero was finishing his quest and ready to fight the final boss, Mr. Stitches, the sword realizes that you need lots of training since you are an entry-level minion. If you are to become the new hero and defeat Mr. Stitches, you’re going to need to complete a whole adventure! Conveniently, Mr. Stitches tasks you with taking the legendary artifacts back to each of the bosses from which the hero collected them. The sword sees this as an opportunity for you to gain the experience you desperately need, so if you go on a new journey!


Underhero itself plays like a platformer since you’ll be moving from 2D area to 2D area. But, as you approach enemies, you go into a turn-based battle system, reminiscent of the Paper Mario series. Based on the enemy you face, you need to choose how you want to fight it. Flying enemies will require you to use your slingshot, while enemies on the ground, you can fight with your sword or other similar weapons. You can duck, jump, and parry using your shield, and all of these actions have different required button presses that involved some specific timing, which will grant the attacks or defense bonuses. If you are low on health, you might want to use your coins to bribe your opponent into not fighting at all, which was definitely an interesting gameplay mechanic! 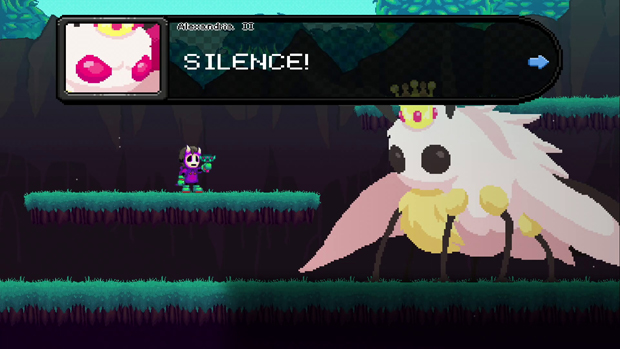 As you fight your way through all of the enemies, you will earn experience that can be put into Health, Attack, or Stamina, letting you choose what direction you want to take your new hero. Are you going to be a powerhouse sword swinger, damage taking tank, or be able to attack a bunch in one turn? It really adds a lot of variety into the game’s fighting system, making for a very enjoyable experience.

There are four major worlds in Underhero, and I was really impressed with how the worlds themselves were presented. There’s also the classic “Come to a locked door? You need to find a key,” scenarios, so go look for it and come back to carry on! The way the bosses levels were designed made sense, often with a hub area that has you going to offshoots but eventually coming back to the center before going after the boss that is guarding that location. 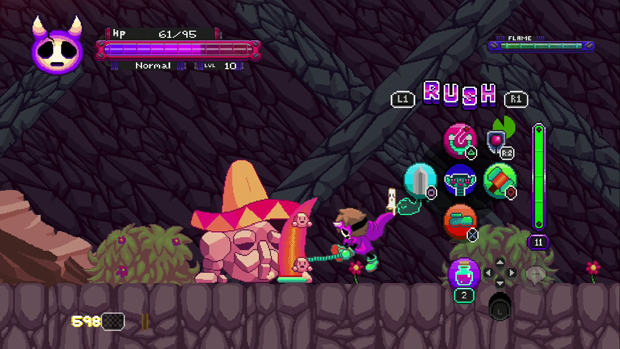 Underhero uses a pixel art aesthetic, and between that and the humor of the game, the whole thing comes together to make for a really fun gaming experience. While playing, I often couldn’t help but laugh at the absurd situations, the crazy dialogue, and Mr. Stitches(the creepy, yet oddly funny big boss). Having the final dungeon be the main hub world for the game and kind of acting like a workplace was really fun as well. The hub has conference rooms, lunchrooms, and living quarters for all of Mr. Stitches’ minions! It’s an interesting angle in a video game that I haven’t seen before. 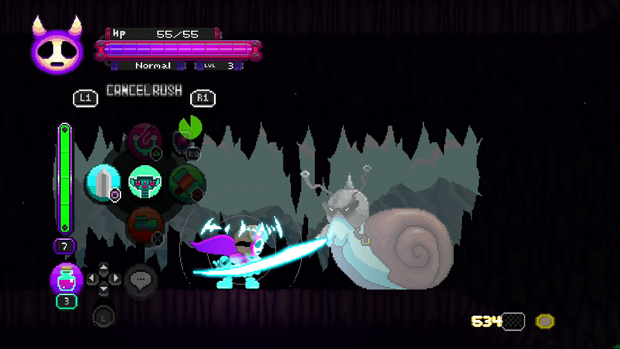 I enjoyed my time with Underhero. It was the blend of genres with some fun platforming and exploration, mixed with some fun turn-based RPG elements with some elements to keep you active. It has great writing with a solid story told from an unusual point of view, making this an easy recommendation to play. Don’t sleep on Underhero, and go download it on your PS4!

Disclaimer
This Underhero review is based on a PlayStation 4 copy provided by Digerati Distribution.