Maneater from Tripwire Interactive and Deep Silver is a ShARkPG – an open-world RPG where you control a deadly shark. Find out if this unique title is worth biting into in our Maneater review! 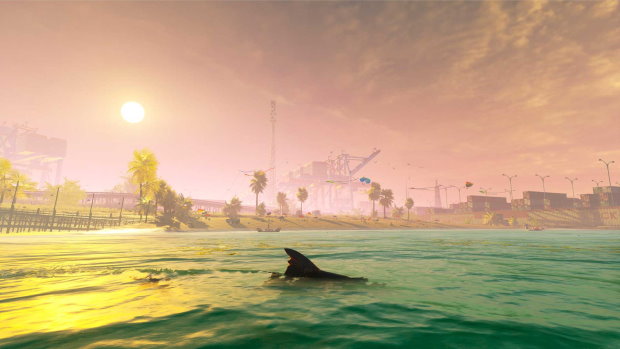 The story starts with a brief intro where you see Scaly Pete, a shark hunter, bragging about what he does best: hunt sharks. After that, you are taken to what serves as the tutorial level of the game where you control a big shark, eating fishes, a few humans, and then battling against some boats, only to end up getting caught by Scaly Pete. Scaly Pete will then cut you open only to find out there was a baby inside that shark. After making a small cut on it to be able to recognize the grown-up shark, it turns itself around and bites off Pete’s hand, freeing itself only to get a taste for blood a few minutes later after swallowing the hand. Your story, or, should I say, quest for revenge, will begin from there as a young shark.

The game plays from a third-person perspective, so you get the usual movement with the left analog stick and the camera with the right one. Being a shark, the main thing you’ll do is bite stuff, which is done with the R2 button. Holding it will hold your prey, and tapping it multiple times will get you to consume what you have bitten. The R1 button is used to evade, whether from another creature or a human’s gun. The L2 button will allow you to lunge for a quick speed burst, and if you hold it, your shark will get to its maximum speed. The L1 is for a tailwhip attack, which knocks back and stuns your opponents. 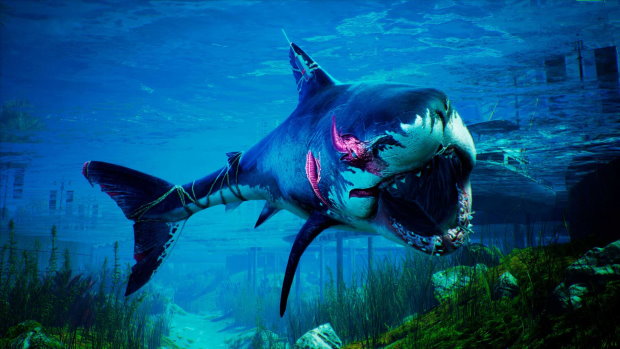 If you open up your log, you’ll see a map of the area, your story quest, and some side-quests when you get some. Each area has a few collectibles that you can gather to gain additional points towards some upgrades. Upgrades can only be done when you go back to your grotto, a safe haven for the shark, and are unlocked upon completing specific objectives. They target different parts of your body and can be anything from bio-electric teeth to getting a poisonous fin. Other than those upgrades, there are also some organs that you can equip that will give you different abilities, like the sonar one you gain at the beginnings of the game.

For a game in which the majority of your time is spent underwater, the developers did put a lot of effort into creating a varied environment with lots of different predators and prey. With the map being relatively open, although it does open up properly at a gradual but steady pace, there’s a lot of fun to have just exploring around. 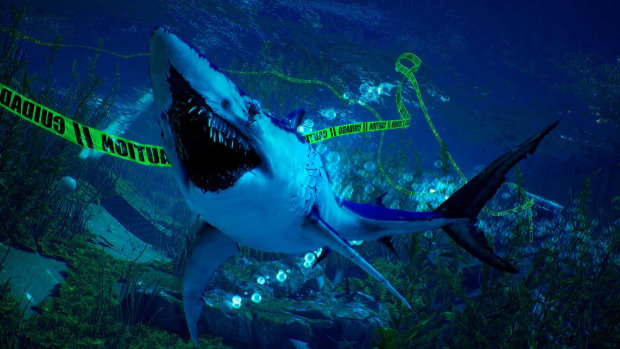 Before even starting the game, there was something I already liked about it: the fact that it does something different. Controlling a shark, doing it in an open-world game, adding some RPG elements so that you can have different builds for your shark, that’s something that’s got to be interesting, right? And within the first minutes of the game, where I was told to go on the beach and eat a few humans, I knew I was in for a good time. A couple of fishes for lunch later, my little pup shark encountered an alligator, and, unfortunately, I didn’t last long. The thing is, there are a lot of alligators around, and in the beginning, you’re no match for them, so you can’t have the feeling of being the powerful creature that a shark is until a few hours in the game.

As for the trophies for Maneater, you’ll find a relatively easy game to platinum, as there is nothing that can be missed. A lot of the trophies are story-related, and the vast majority of the others will come from fully exploring the map and finding all collectibles and nutrients caches. As long as you explore the whole map and focus on working on completing as much of each area as possible while you swim in merry joy, you will be able to add a Platinum trophy to your collection in 15-20 hours at most, depending on your skill level and how long it takes you to collect everything. 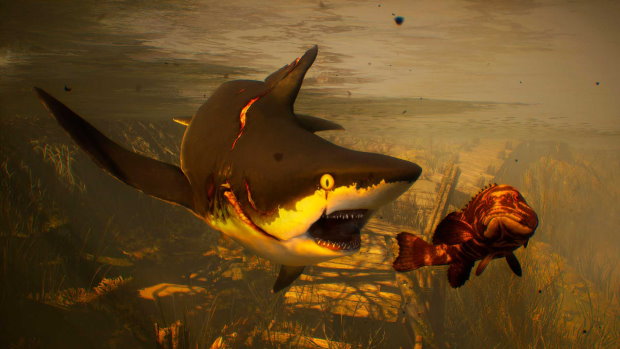 Maneater is not your traditional open-world RPG game, and for that alone, it’s worth your time. It’s a nice change from regular games in the genre and offers a decent amount of fun. The game is out now on PlayStation 4 for a $39.99 asking price, which is a good one for all the fun you’re going to have!

Disclaimer
This Maneater review is based on a PlayStation 4 copy provided by Tripwire Interactive.

Jump King Out Next Month On PS4 And Nintendo Switch