Gun Crazy from Ratalaika Games and Ritual Games is a fast-paced 2D run ‘n gun game on PlayStation 4. Learn more about it in our Gun Crazy review! 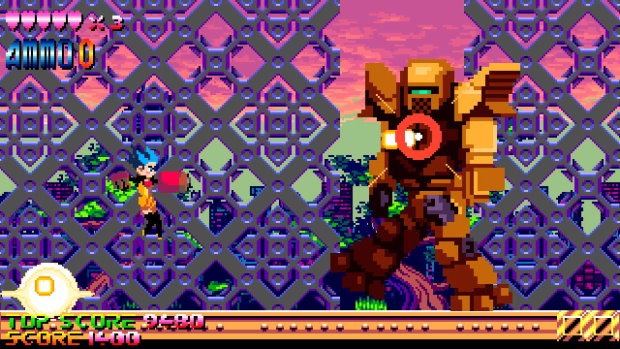 In Gun Crazy from Ratalaika GamesRatalaika Games and Ritual GamesRitual Games, you’ll be taking control of a female police agent with a giant gun cannon in one hand, and a giant robotic arm, ready to punch at shoot anyone who gets in her way. You’ll be taking on a bite-sized but challenging game with four stages to run and gun through, with everything around you trying to kill you. Defeat enemies to make giant gold coins pop up, which are instantly absorbed by your character, and they will go towards boosting your overall score. 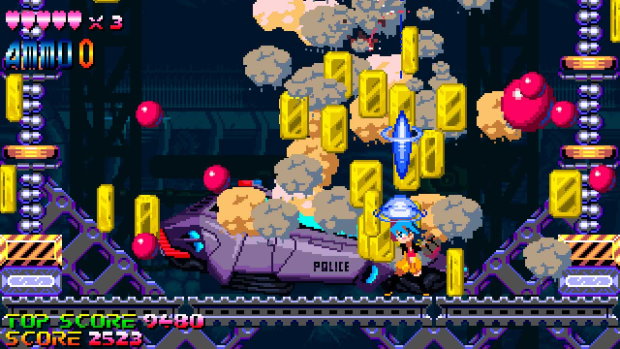 You’ll move your character with the left analog stick or the D-Pad, jumping and double jumping with the X button. You’ll shoot with the Square or the L2 buttons, aiming in all directions with the left analog stick or the D-Pad. If you want your character to remain on its current position and not move, you can do this by pressing and holding down the L1 or R1 buttons as you shoot. If anything comes too close to you, pressing the attack button will prompt a melee attack that packs a punch. You can collect more powerful weapon enhancements, but they will have a limited ammo count. There’s also a short dash skill you can use with the Circle button, which will make it possible for you to avoid some of your enemies’ attacks. 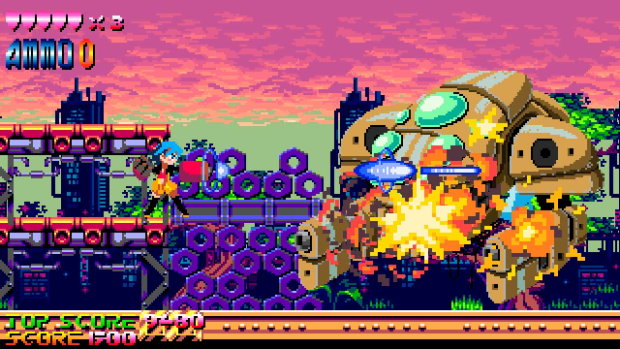 In Gun Crazy, you’ll be fighting against jumping blobs, running and flying mutants, gun turrets, mechanical orbs that materialize out of nowhere, to name some examples. You’ll also be taking on different mini-bosses and proper bosses in each stage of the game. If you want to survive, you’ll have to pay attention to their movement and attack patterns, because some of them will go into bullet hell territory, spraying a ton of bullets all over the screen, leaving only a small space or two for you to be safe. 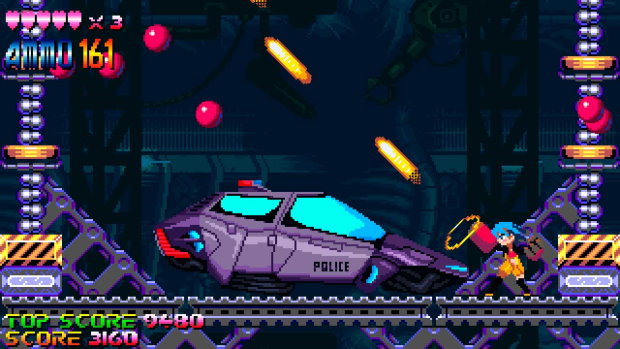 When you die, which will happen more than once in Gun Crazy since there’s a lot of enemies to destroy and attacks to avoid, your next life will have you immediately continue right from the same spot where you died. Lose all of your lives, and you’ll have to use one of your continues to carry on. While your total number of continues is limited, the good news is that when you continue, you will also continue right at the same spot where you died, so any progress you had made in damaging a mini-boss or boss – which are usually the ones that will kill you – will remain.


As for the game’s trophies, Gun Crazy on PlayStation 4 has a full trophy list with a Platinum waiting for you. The trophies will unlock at a steady pace as you take on the game’s first two stages since the trophies are awarded for defeating each of the different enemy types you will face, for defeating each of the mini-bosses in stage 1, for defeating the bosses in stage 1 and stage 2, for obtaining a weapon enhancement, and for reaching 1,000 and 2,000 in score. Depending on your skill with run ‘n gun games, you could be adding a new Platinum trophy to your collection in 10-15 minutes! 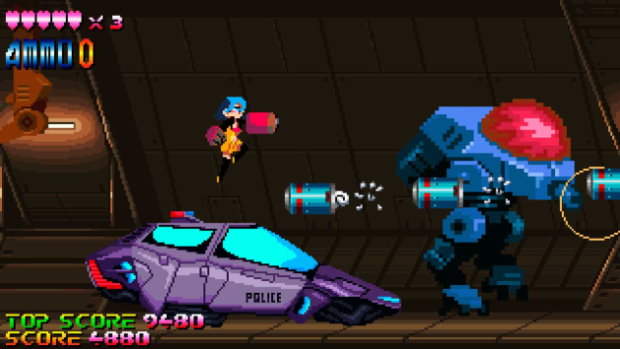 Gun Crazy is a fun, fast-paced run ‘n gun game on PlayStation 4 with a solid pixel art style, easy to understand gameplay mechanics and a nice difficulty curve that will test you every step of the way. There is some nice level variety as well, with one stage having you running around a city, one that plays similar to the classic Pang game in which you pop bubbles that will split into smaller bubbles, or another one that has you riding on top of the roof of a police vehicle as you race down a tunnel. Gun Crazy is out now on PlayStation 4 for only $4.99.