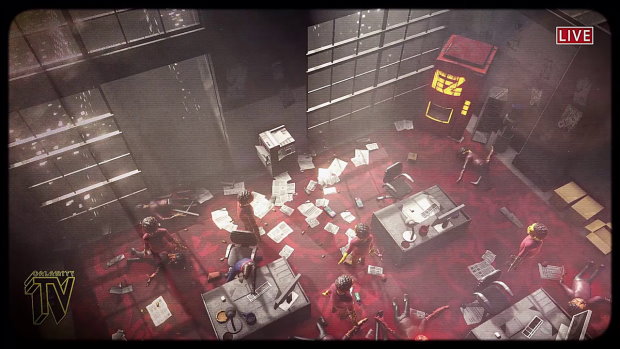 Freakout: Calamity TV Show by Jandusoft is a top-down arcade-style twin-stick shooter on Nintendo Switch in which your goal is to survive! You’re the latest participant in a reality TV show where violence and death is what the audience needs. You’ll be going up against mutants and killing machines as you aim for as high a score as possible by keeping your combo multiplayer going strong as you avoid everything that is out yo get you. The game has certainly been inspired by the classic arcade game Smash TV, which was also ported to console. 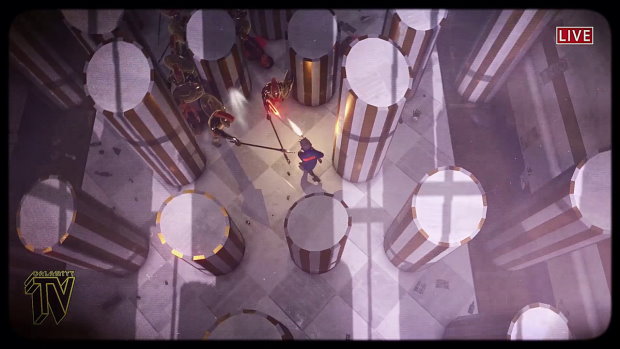 As for the controls for Freakout: Calamity TV Show, you will move your character around with the left analog stick, aiming and shooting as needed with the right one. By collecting cans of mutator, you will be able to boost your overall stock, allowing you to dash away from danger by pressing the ZR button. Since one hit is all it takes to kill your character, having some mutator on you at all times will prove to be a must. More weapons and abilities will be unlocked as you progress through the game, which will allow you to select your loadout before you go into a new stage. 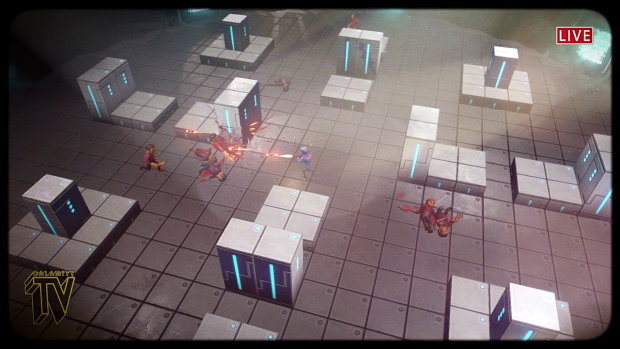 You’ll first take on a short tutorial so that you can learn the basics of the game, but Freakout: Calamity TV Show proper starts in the generic-looking arena where the reality TV show is recorded. The arena will change its configuration around a bit, raising and lowering columns that you can use to protect yourself from the mutants that are out to kill you. Survive for long enough, and you’ll take on a boss fight against a muscular opponent that has a TV for a head, and a big weapon to kill you. After this, the game will change things around by sending you into a top-down level with many doors to open, before you find yourself with a giant lawnmower-style robot that wants to tear you to pieces – that is, after a mysterious man helps you escape from the TV set. 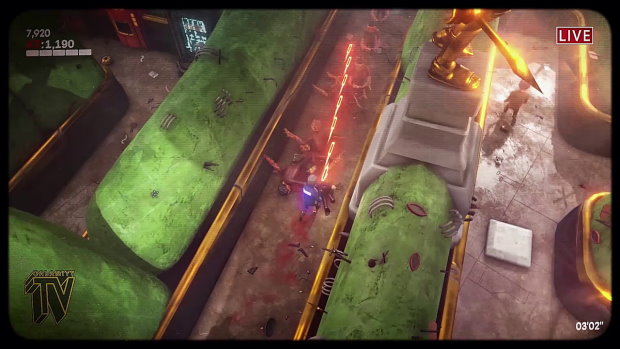 After this, the game will keep throwing new areas at you as it tries to keep the whole thing feeling fresh. The difficulty is something that would get in the way of some players with less experience from enjoying the title, but the AI does a good job of balancing things, what with mutants who pop into the screen, only to throw themselves down a bottomless pit right away, or getting stuck in walls as you easily pick them off from a safe distance.

If you’re looking for a new arcade-style twin-stick shooter with a bit more story, then Freakout: Calamity TV Show might be a good option. It’s not going to win any awards for its looks – or enemy AI – but it sets out to give players a new twin-stick option with a good challenge, and it certainly does that on Nintendo’s console, even if other elements of the game feel lacking. Freakout: Calamity TV Show is out now on Nintendo Switch for $9.99. 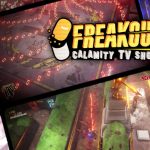 Twin-stick shooter with an interesting premise but lacking execution

Disclaimer
This Freakout: Calamity TV Show review is based on a Nintendo Switch copy provided by Jandusoft.