The WILDEST ANIME FIGHT. Fly super fast, smash your friends through skyscrapers and break the planet with one punch! 1-4 players local & 2 online.
FLY PUNCH BOOM! is everything you’ve seen in your favorite anime fights.

Smash your friends so hard whole planets break in half. Ram skyscrapers, whales and asteroids in their face, chase them and unleash over-the-top super moves. It’s all about the joy of punching!
Ever got uppercutted with such gusto that you got kidnapped by aliens?
Wanna digest your enemy, then fart them out so hard everything explodes?
Wanna punch an Elvis lookalike bird until they shoot into the moon’s butt?

FLY PUNCH BOOM! says YES to all this, and more. Way more.

Features:
– LOCAL and ONLINE Multiplayer, up to 4 PLAYERS local & 2 online
– ARCADE MODE, UNLOCKABLES and SECRETS for solo players
– DESTRUCTIBLE STAGES where everything is a trap, and everything is a weapon!
– ANIME SUPER FIGHTS with flying smashes, deformed faces and insane special moves
– 40 STAGE FATALITIES: get mauled by cats, break the planet in half, or explode in the moon’s butt!
– High impact cartoon graphics that zoom from space to a character’s face
– KICKASS ANIME SOUNDTRACK by Giorgiost

Fly Punch Boom! is a new anime fighting game from the people at Jollypunch games. It’s a satirical fighter, allowing you to have those anime battles you’ve always dreamed of, punching people right across the map, through buildings, etc… it’s really cool! 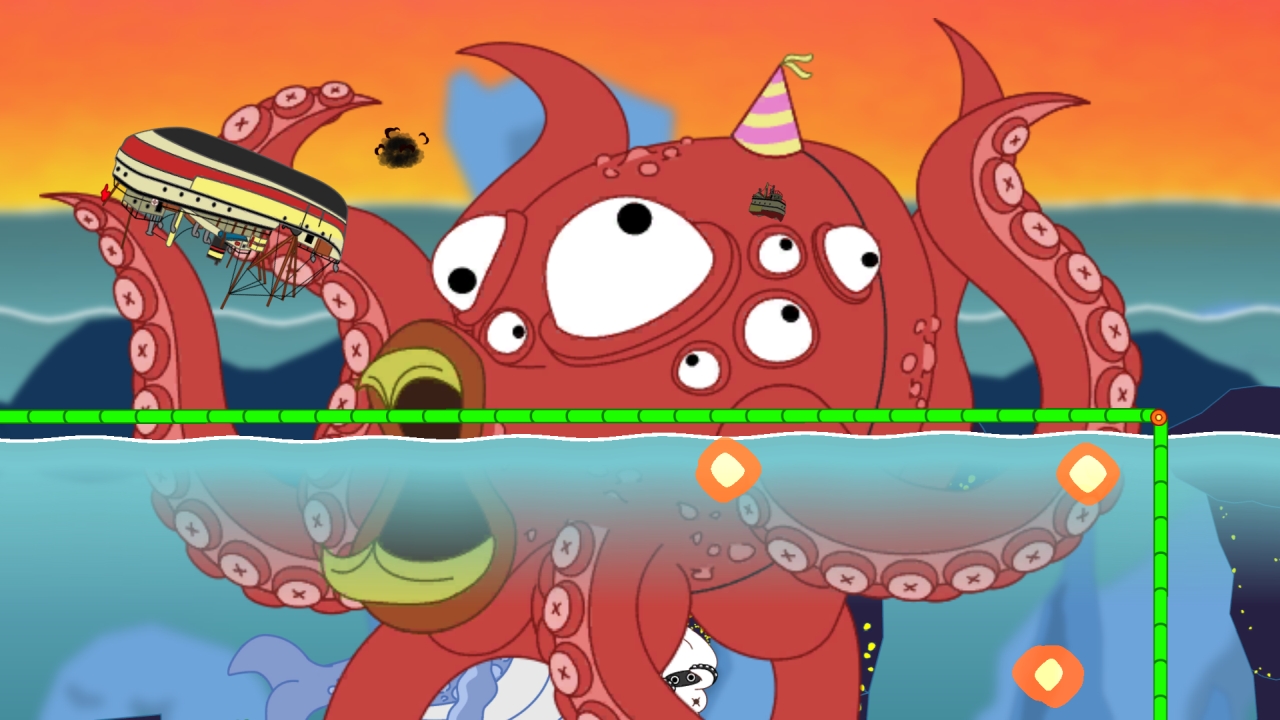 Fly Punch Boom! starts you off with a tutorial, which I completely suggest you do complete. The stages are large, filled with buildings and other obstacles surrounded by an elastic barrier. The fighting is simple to learn, as you can fly around the map in any direction and go after your opponents. You can rush to them at super speed. When you go to attach them, you can choose from using a hit, throw, or counter. Your opponent will likely be choosing one of those as well. At that point, it comes down to a rock-paper-scissors style system where hits beat throws, throws beat counters, and counters beat hits, to determine who lands the hit and gets the advantage in the attack.


It’s a good system, but it lacks some depth, since, in the end, there’s a game of chance that will play a role in how you do in each fight. You need to be thinking about what your opponent will choose so you can one-up them. There aren’t really any specific characteristics for the individual characters beyond their super moves, although each character does have the same command to trigger them. 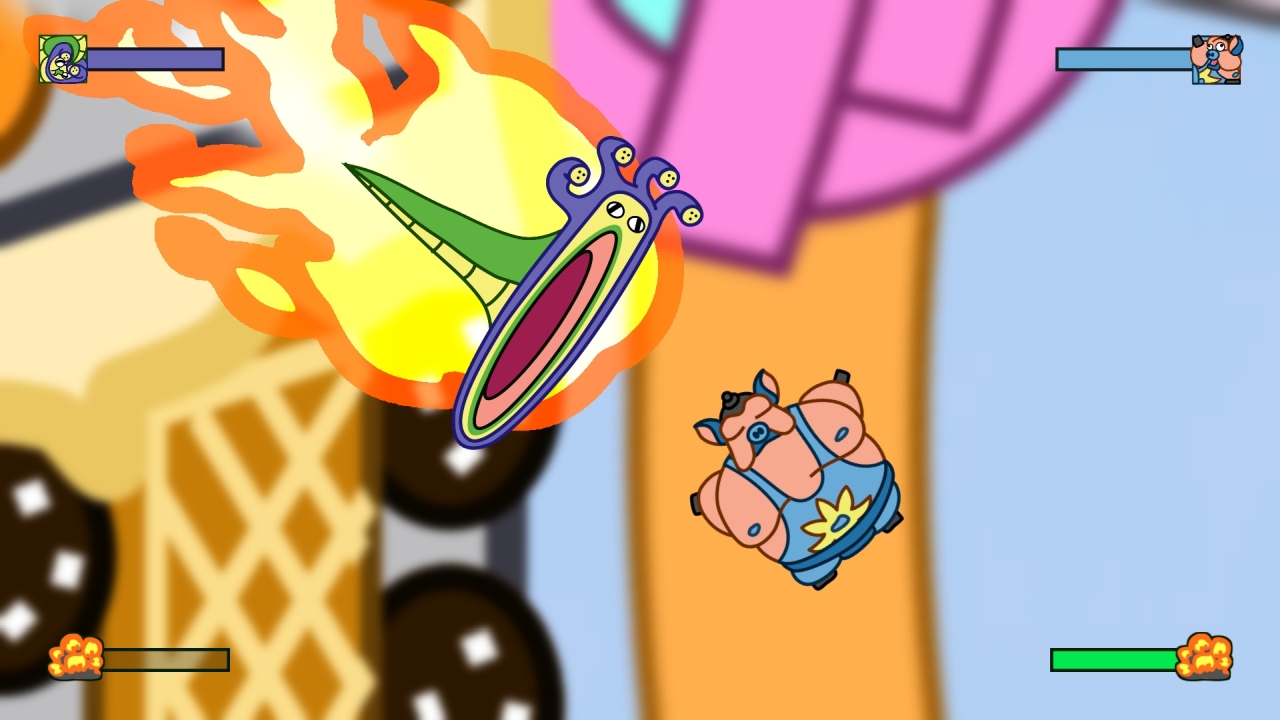 I think the biggest issue here is the lack of a story. When you start playing the game, you choose local or online, and then you can have a simple 1 vs.1 or 2 vs. 2 battle, and an Arcade Mode. I would have loved to see an option with more stories set in this weird universe to help build an attachment to the characters. There is a lore page, which, when starting, will give you a paragraph of info about the universe, and you can unlock lore pages as you play for the characters in the game, but it’s just not enough. I do want to give a shoutout to the unlocking page, which gives you a clear guide on how to unlock the secrets, including additional characters and cosplays of your starter characters. It’s unusual for a game to be that upfront on how to access its secrets, but honestly, that was refreshing. 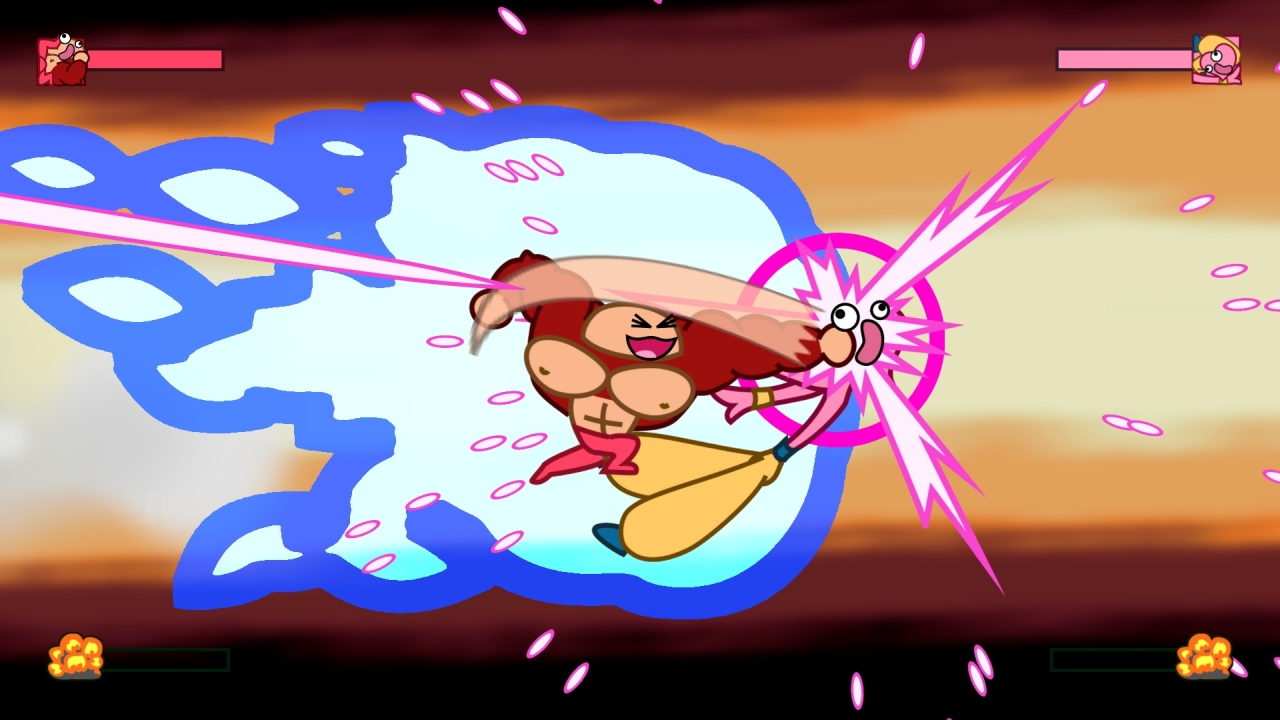 What it lacks in depth, it makes for in style, as you zoom around the map in every different direction, it’s fast. There are large buildings around the map, and you can knock your opponents right into them, or attack the building directly, sending pieces of it flying at your enemy. Thankfully there is a rebuilding process, so during your match, you can do this a lot, as it was one of my favorite parts. Each stage also has stage finishers or fatalities when you are low on health, and you hit the elastic at the edges of the stage. They are all sorts of crazy that I don’t want to spoil. You don’t need to do anything special to trigger them, so go explore and find them!

The game uses a very cartoony art style, without the hard edges you would expect to see in traditional anime… it’s almost as if a child designed the world and the characters. That’s not a knock on it either since I think it’s a really neat aesthetic that adds to the formula, the world it’s creating, and the chaos it creates. I’m here for it. 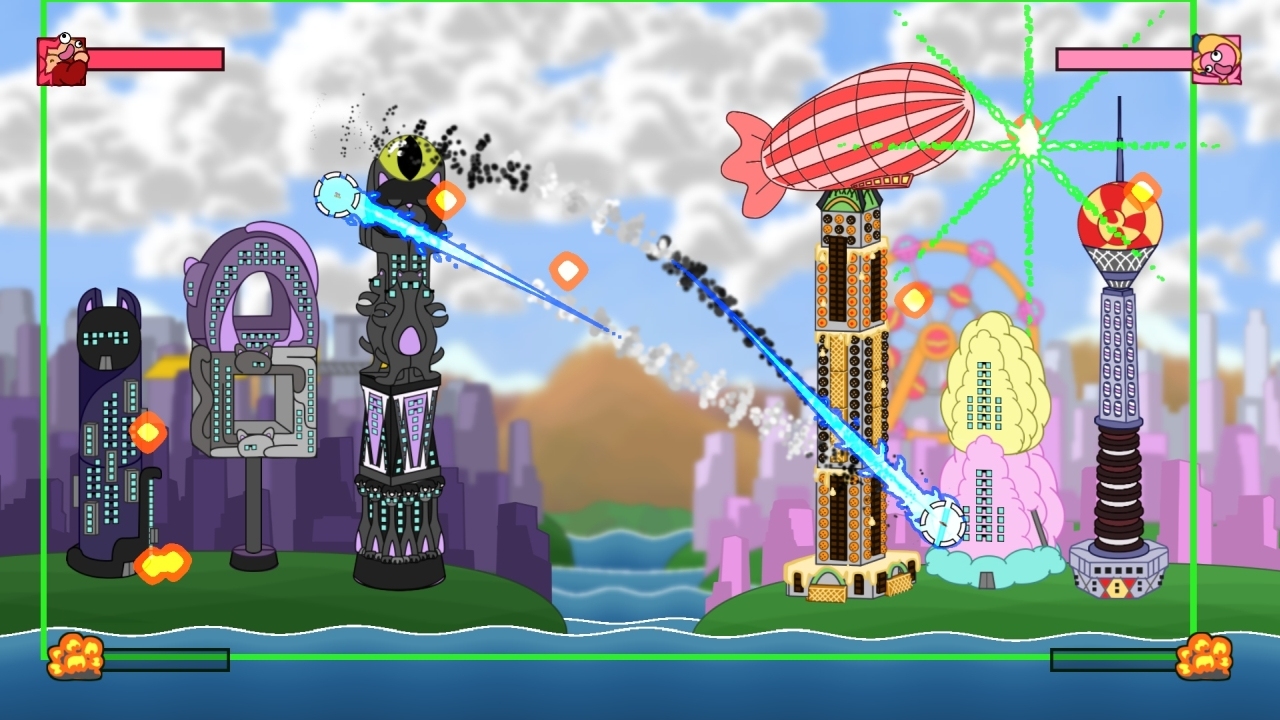 I had a good time with Fly Punch Boom! What it lacked in depth it more than made up for in style and fun. It’s a good cartoony brawler that helped me live some amazing anime fight scenes in only the way this game could allow. This is more fun when playing with people than versus the computer, but still a good time overall.

Disclaimer
This Fly Punch Boom! review is based on a Switch copy provided by Jollypunch Games.

Reasons Why FIFA Video Games Are So Popular