Cryogear from PolarityFlow is an exploration-driven 2D sci-fi Metroidvania on the Nintendo Switch. Learn more about it in our Cryogear review!


In Cryogear from indie PolarityFlow, you’ll be taking over controlling a reprogrammed clone – G.3.4.R – as he discovers the world, learning new abilities and skills as it goes, unveiling the mystery of the Emperor AI. After the clone’s boot-up sequence, you will start your journey alongside G.3.4.R in the cloning facility. G.3.4.R will need to go over the initial sequence that will remind it of some of the abilities it possesses. You’ll soon meet with M.4.T.3, your creator, who is trying to build an army of clones to take on the Emperor AI. 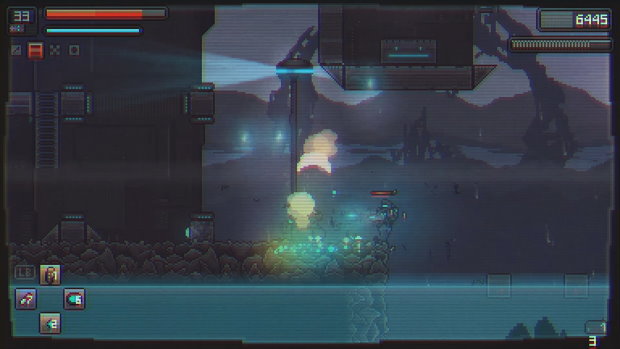 You’ll be moving around with the left analog stick or the D-Pad, sprinting with the Y button, and aiming and shooting with the right analog stick. You can also fire with the ZR button, changing fire mode with the X button. You can jump with the B or ZL button, depending on your playing style, and can block attacks with the A or R buttons by activating your PSI Shield. Your inventory is mapped to the – button, from which you’ll be able to check your items, review your skills, and take on some crafting projects to boost your odds of survival.


There will be many computer terminals to find during your time with Crygear, so be sure to press up to interact with them! Some will have valuable data to give you a glimpse into the game’s dark future, while others, such as uplinks that will recover your clone’s hit points (HP), while also granting access to new areas once you’ve activated enough uplinks. You should also keep an eye out for the save stations that will upload your clone’s progress to the cloud so that the system can download its data to a new body if it fails its mission. 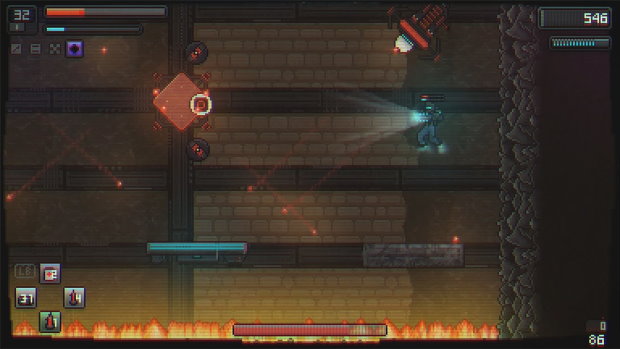 As you destroy enemies, you will collect energy, which will act as the game’s experience points. You can use energy to level up by activating a terminal’s uplink and pressing the X button. You will be taken into an attributes screen, from which you can increase G.3.4.R’s Vitality, Strength, Intellect, and Agility. Each of these attributes will have an effect on the clone’s performance. Vitality will boost its overall HP and blaster damage. Strength will boost HP a bit while also increasing the power of melee attacks. Intellect will boost PSI energy and lance attacks’ damage. Agility gives a lower boost to PSI energy while affecting the charger. You will know when you have enough energy to level up by checking the counter in the upper right corner of the screen. If you die, the energy on you will be left behind, and you will have one last chance to get to where you died in order to recover it. 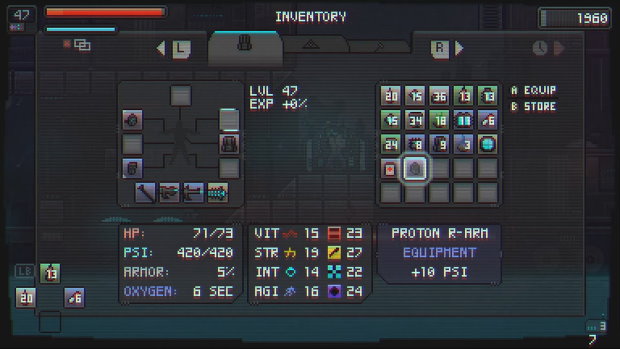 You will also gain skill points as you progress through the game. These can be used to unlock new skills in the four different skill trees to which G.3.4.R has access. There’s a ton of skills to unlock, for thing such as increasing the speed of blaster bullets, increasing your blaster’s accuracy, jet boots so that you can use a double jump, increasing the change of pickups healing a bit of your HP, reducing fall damage – since otherwise, you have to use your PSI Shield to lower the fall damage you take -, or increasing your clone’s lung capacity so that it uses up less oxygen when underwater, to name some examples. 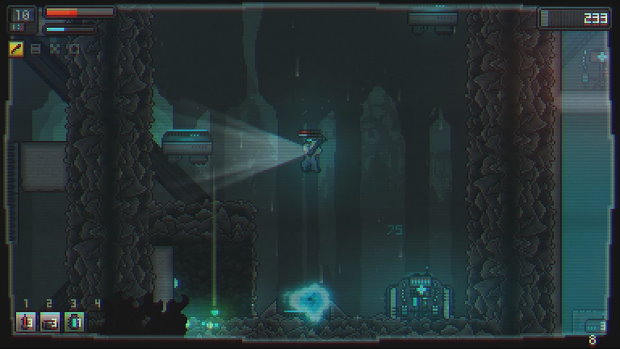 And then, there’s crafting. You will find different spare parts, biomass, plants, and whatnots, which you can use in the Crafting section of your menu to build drones to aid you, healing items to cure your wounds, a R3B00T to reset your skills, or better weapons to succeed in your mission. Having many healing items is going to be a must for Cryogear, but boosting your weapons is also just as important so that you can be ready for any particular scenario you run into. Be sure to search high and low in every area, opening lockers, checking suspicious containers, so that you can collect as many crafting resources as possible.

The team recently delivered a couple of updates to Cryogear on the Nintendo Switch, which have revamped the game’s graphics, added new items, rebalanced gameplay mechanics, introduced new hidden areas, additional story elements, new progression hints and messages, more FX… more new of everything, really! The latest patch on Nintendo’s console added some extra bells and whistles to the whole thing while fixing some bugs here and there, making the game even better. 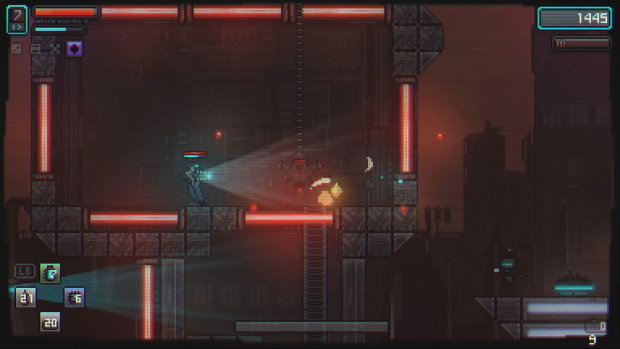 There are many secrets areas in Cryogear. If you want to find them, I suggest that you destroy all the boxes you find and make sure that the walls in each area are as solid as they seem to be. Once inside these secret areas, you will find a challenge to complete, such as powerful enemies to defeat, containers that could be hiding a deadly mimic, or robots that can deal a ton of damage. While in these secret areas, you will be able to activate some mods for the game for things like increasing the difficulty while receiving a small energy boost, or having your PSI Shield point you in the general direction of loot to collect.

Cryogear is a solid sci-fi Metroidvania with an addictive gameplay loop that has you slowly but surely exploring each new area as you collect energy to boost your clone, skill points to unlock more and more skills and improvements, and crafting materials to build weapons and drones to aid you. Cryogear is out now on Nintendo Switch for $19.89.

Disclaimer
This Cryogear review is based on a Nintendo Switch copy provided by PolarityFlow.