In Random Heroes: Gold Edition from Ratalaika Games and Wobblyware, Earth is being invaded by aliens! Because of this, you and a bunch of random heroes are tasked with helping to save the day and stop the invasion before it’s too late! You’ll need to run, jump, and gun your way through 108 levels to stop the aliens once and for all, collecting as much cash as possible along the way so that you can use it to purchase more powerful weapons that can make short work of the puny aliens. 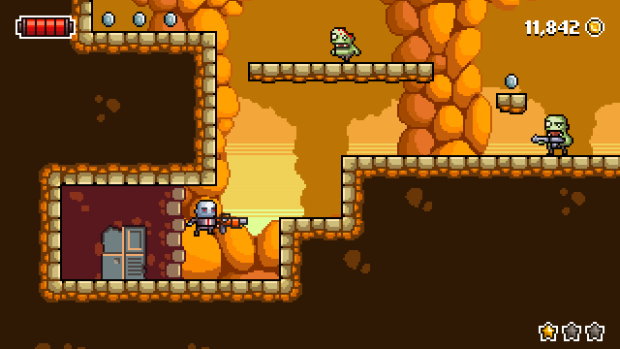 Controls are simple and to the point, since you’ll move your character around on a 2D plane with the left analog stick or the D-Pad, jumping with the X button and attacking with the Square button. For every stage, you’ll be given a rating of up to three stars in total. One star you will get for finding all of the coins in the stage, which won’t be hard to find since some of the hidden coins are located behind fake walls, and you can usually see the coins on the screen. Another star is awarded for completing a stage without receiving any damage from enemies or hazards. The final star you will get after you’ve defeated all of the enemies in a stage, which won’t be hard to do if you’re searching high and low for the hidden coins. 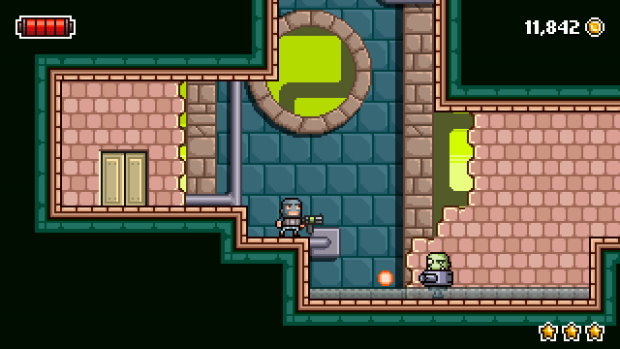 Don’t worry if you can’t get all three stars in a single run since you can replay any stage to get the stars you’re missing. You will also end up replaying some stages if you don’t find all of the hidden crystal skulls. These are important because each crystal skull that you find will increase your overall health, which will prove to be valuable during your first run with each of the bosses the game will throw at you at the end of each set of levels! Each boss will have its own movement and attack pattern, so you’ll need to pay attention as you try to avoid receiving any damage. 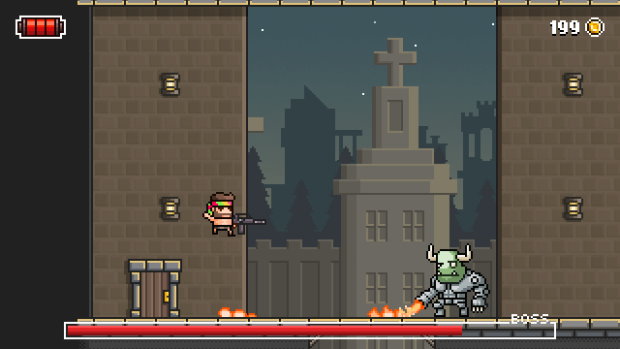 For every three stars that you get in a stage, you will unlock a new hero for your group. Each of the heroes will have unique abilities, so be sure to check them out as you unlock them! You start out with the Bandit, who has no extra abilities and will then unlock other characters such as the Cop, who has two health points and deals one extra damage, the Gentleman, who has two health points and one extra point of speed, the Hobo, who loses one point of damage but compensates this with two points of speed, the Professor, who offers a speed boost of two points, or the Agent who has one health, three extra points of damage and three extra points of speed, to name a few examples. 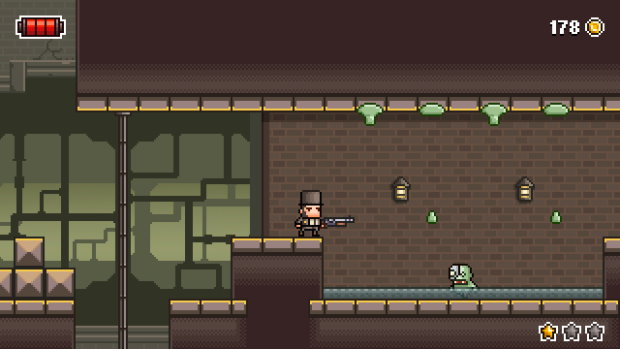 As you collect coins, you will start to earn enough to go into the Shop, which is available from the pause menu, where you can purchase weapons that will have different stats that will improve over the 9mm gun you start the game with. Each weapon will have to main stats for you to worry about: damage and speed. The higher the damage value, the more damage each bullet will deal. The higher the speed damage, the faster the weapon will fire. And no, you can’t just grind for coins by replaying the first couple of stages over and over again to buy the strongest weapon, because the guns will unlock as you progress through the game, so you’ll need to complete at least twelve levels in Random Heroes: Gold Edition before all weapons are available for purchase. 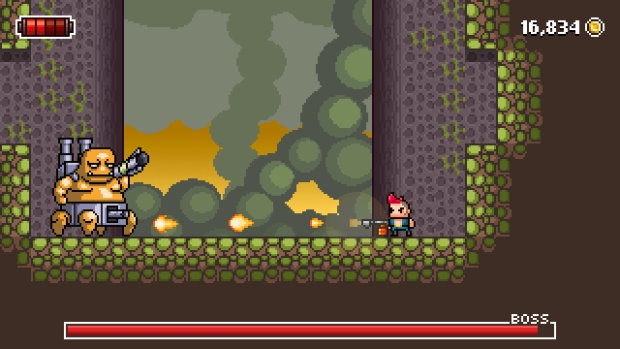 As for the trophies, this is a game from Ratalaika Games, which means there’s going to be a Platinum trophy for you to earn! The game is also a Cross-Buy release, and since the PS4 and PS Vita versions have separate trophy lists, that means buying one or the other version will net you two games and two potential Platinum trophies! You will unlock trophies by buying a handful of weapons, collecting a crystal skull, killing a dozen different types of enemies, defeating three of the game’s bosses, and getting three stars on fifteen levels so that you can unlock fifteen of the total number of heroes. 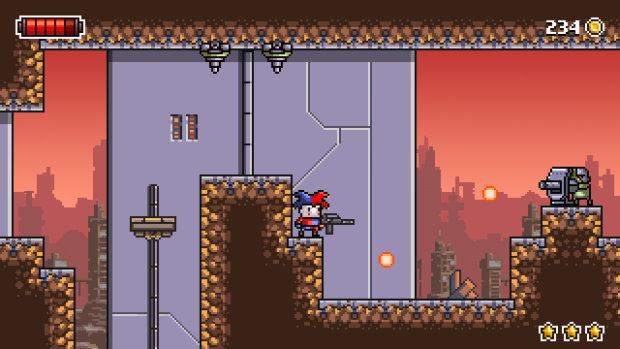 Random Heroes: Gold Edition is a budget 2D action platformer from Ratalaika Games and Wobblyware that offers a comforting, simple gameplay cycle that is great for passing some time at home or on the go. It’s out now on PlayStation 4 and PlayStation Vita for only $4.99 as a Cross-Buy release with a Platinum trophy at the end of the road. You’re going to be spending a handful of hours playing this one to see everything it has to offer. Are you ready?

Disclaimer
This Random Heroes: Gold Edition review is based on a PlayStation 4 code provided by Ratalaika Games.

Towertale Out On Nintendo Switch