This is a double review for Totally Reliable Delivery Service. ThaRaven403 and Ceidz played the game, and this review presents what they both had to say.

Totally Reliable Delivery Service is a single or multiplayer (local and online) game in which your goal is to deliver packages to customers. In my first play session, I played alone, and then I played in couch co-op with my daughter. Without hesitation, I’d say that you should focus on the multiplayer side of things, since its where the fun is found.

As soon as the game starts, you begin in the delivery service’s backyard and can move to the closest mailbox, which, once activated, will give you a package to deliver. There are mailboxes everywhere in the open-world setting, and each one leads to a single mission in which you must deliver the package to its destination. Delivering packages is hard, not because the destination is hard to reach, but because of how clunky the characters are. I get that this tried to do things a bit like Octodad, but its harder to get the hang of things in Totally Reliable Delivery Service. You need to be very careful, because moving even slightly in the car will often make the package fall off the vehicle, because of the physics engine, which was annoying. 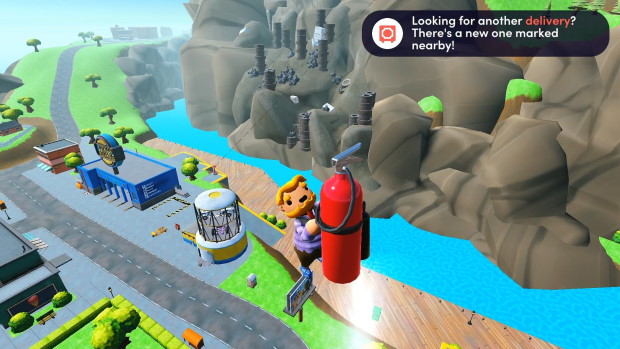 As I mentioned, I played subsequent sessions with my daughter, and the experience is certainly different when you take on this one with another player. We tried doing some of the missions but just didn’t have as much fun due to the clunky package lifting controls. We didn’t do manage to complete many missions, but we did have some fun playing in the sandbox, using the different available vehicles – or other strange means of transport. It was fun using an helicopter and chasing her or crashing right in front of her when she wasn’t expecting it.


As for the presentation, there isn’t much to say about this game except that it’s an open-world game. The environments are bland, but I thought that the world was surprisingly big, albeit being a bit empty, and nearly devoid of life. The background soundtrack is moody but forgettable. 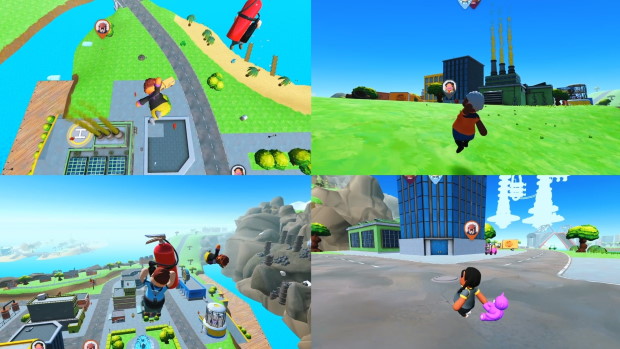 This game has a simple goal for you: deliver packages to their destinations. Scattered around the map are delivery boxes that will provide you with a package to deliver once you’ve pulled a lever. It will be up to you to find a way to make it to your destination with the package. Some of these deliveries will be timed, while others will have a score that drops every time your package takes a hit.

The controls are relatively simple, although difficult to handle. The L2 and R2 buttons allow you to grab with either the left or right hand, respectively. Some packages are heavier than others so it can be useful at times to be able to grab them with both hands. You can also hold a package with one hand as you grab the control lever of a vehicle with the other. The L1 and R1 buttons will allow you to raise either arm in the air. This will be pretty useful if you have to lift a package to put it in the back of a truck. Although simple, the reason I found the controls to be difficult is that when you need to grab a package and raise it, with a natural grip on your controller, you’ll grab with your index and become stuck when it’s time to raise your arm with the other shoulder button. 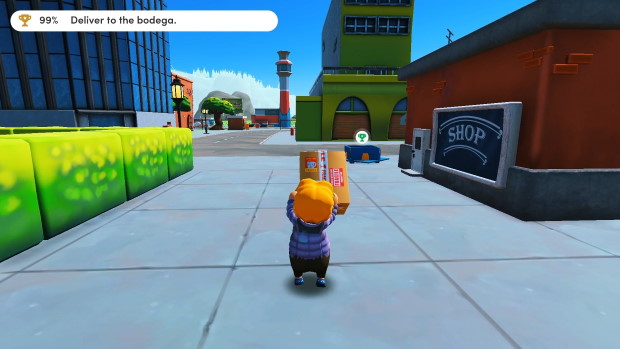 I didn’t have anyone to play with during my time with the game, so I ended up exploring it from a single-player perspective. Unfortunately, it left me with a feeling of disappointment. The only thing you have to do when you appear on the map is going to a delivery box, have a package appear, and deliver it. For me, this felt redundant after only a few deliveries. Sure, you play in an open-world setting, and you can explore it, but I didn’t feel like I’d get anything special while exploring it. If I compare it to another physics-based game, such as Goat Simulator, there is so much more to explore, with mods and secrets, so there is a lot of fun to have from simply exploring.

There is also the clunkiness of the controls and the physics. Your character moves slowly when on foot and the ragdoll effect feels incredibly annoying. Considering the issues I mentioned earlier, simply putting a package in the back of a truck was a herculean task. And even when you’ve finally done it, you simply try to get to move with your vehicle, and the package drops on the floor.

As for the trophies, the game isn’t one that offers a big challenge to get the Platinum trophy. Your longest task will probably be to complete 100 deliveries, but other than that, if you explore every place on the map and gradually unlock more vehicles, you should be good to go for that shiny trophy. 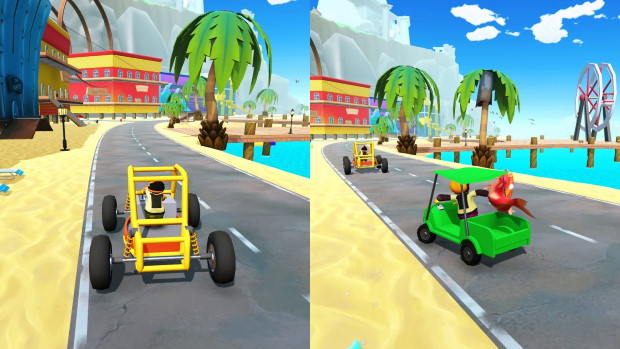 Final Thoughts
Totally Reliable Delivery Service is a hard game to score since the experience is so different in single-player from what you’ll get in multiplayer. What isn’t redeemable, however, is the fact that the core game is not as entertaining as it should be, be that in single-player or multiplayer. If you were planning on purchasing Totally Reliable Delivery Service to play with family or friends in the multiplayer modes, this game could be one to get for a good laugh due to its bizarre nature. But if you were planning on taking on this one for a spin on your own, then you should avoid it.

Disclaimer
This Totally Reliable Delivery Service review is based on PlayStation 4 copies provided by tinyBuild.

[PS4Blog.net Interview] Jump Over The Age On In Other Waters