The story takes place ten years after the events of Streets of Rage 3. The Syndicate and Mr. X had been defeated, and the city was in peace, but now a new crime empire has taken control of the streets and pretty much everything in the city… even the police! Moreover, this empire is rumored to be led by Y Twins, who are Mr. X’s children. Axel and Blaze, the two characters that have appeared in every title in the series, along with Cherry, Adam Hunter0s daughter, and Dr. Zan’s apprentice Floyd, join forces to try and stop those new criminal masterminds. 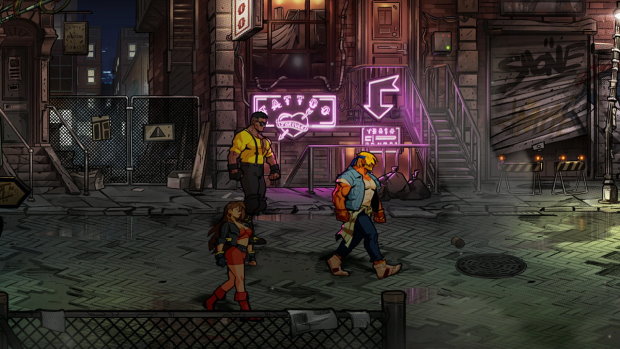 As you start the game, you’ll be presented with the menu to choose from a few modes, although some are locked until you beat the story. Those modes are Stage Select, Arcade, and Boss Rush. Battle Mode, where you can fight off against individual opponents instead of the normal levels, is back from the previous entries in the series. As for Story Mode, this is where you’ll follow the story as it evolves between the stages you fight your way through. There are four difficulty levels that you can choose from when you start, although a fifth one, Mania, is available once you’ve beaten this mode once.


As in pretty much every beat ’em up games out there, your goal is pretty simple: get to the end of the level while beating the crap out of everyone who crosses your path. You jump with the X button, attack with Square, and pick up weapons or food with the Circle button. The Triangle button is used for a special move that you’ll want to activate only when truly needed since it drains part of your health. If someone comes at you from behind, you can perform a back attack with the R2 button. You’ll also collect stars as you play, which allows you to unleash a powerful Star move that’s unique to every character and does an incredible amount of damage to foes surrounding you, making it ideal for boss fights. 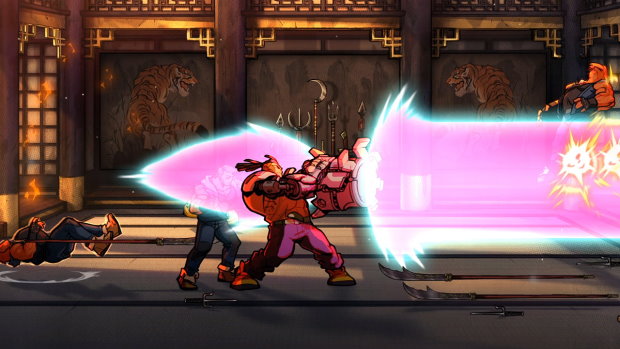 To add something new into the Streets of Rage mix, you can build up a combo streak as you punch and kick your way through the levels. The streak will break if you either get hit by an enemy or hazard or if you go too long without hitting an enemy or a breakable object. The higher your combo, the more points you’ll get at the end of the combo, and this is important since your score will help you earn extra lives, which are a must when playing in the higher difficulty settings. And since one of the trophies is tied to reaching a cumulative total of 5 million points, you’ll want to keep those combos high!


Visually, the game is like a blast from the past even though it’s got a totally modern touch. It feels like the original Streets of Rage, but with a colorful and incredibly good hand-drawn set of stages and characters with lots of detail in their animations. For people who’ve played previous entries, a lot of the old enemies are back with a new look, along with new enemies that perfectly fit the Streets of Rage universe. As for the soundtrack, which has always been a highlight in every Streets of Rage game, it totally delivers and is yet another great one for the series. If that wasn’t enough, there’s an option to switch to a retro soundtrack that consists of tracks from the first titles in the franchise. 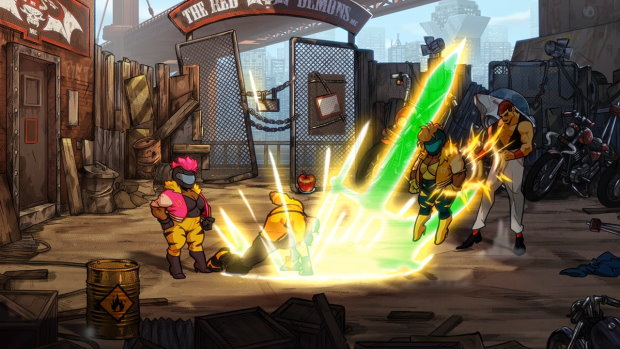 As I grew up mostly as a Sega kid, until the day I switched on the PlayStation bandwagon, Streets of Rage has always had a special place in my heart. Sure, there were the Double Dragon and Final Fight series, but to me, they were not as great as Streets of Rage. It’s also one of those series I’ve played a few times over and over again throughout the years since it has been able to stand the test of time.

As soon as I jumped into the first level, it felt as if I had just completed the third game and was going straight into the sequel. Every fan of the original games will feel right at home and will be up and running in a matter of minutes. For die-hard fans, there’s even an option to turn on legacy mode controls where everything is done only with the X, Square, and Circle buttons. 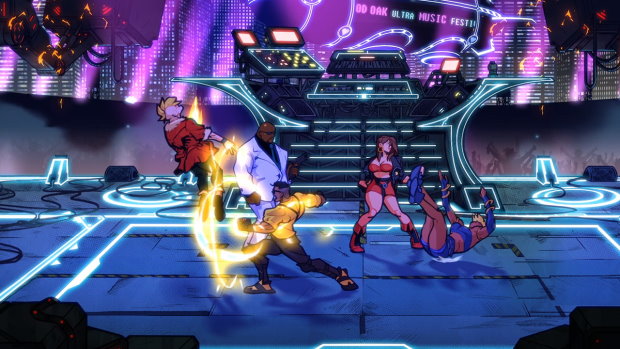 The action is great, and the combo system adds a little something to try to up your game a bit. Combine this system with the hazards that you can use to your advantage in the levels, like striped electric wires or toxic waste on the floor, and you’re in for a lot of fun. There is also a high replay value since you’ll unlock more characters to play with as you beat the game over and over again, adding to the overall pool of points you’ve managed to earn from each run.

This brings me to the trophies. Since a lot of them are tied to beating the game with different characters, you’ll do at least eight playthroughs, and probably a whole lot more for each of the twelve stages since you need to get an S-rank on all levels on at least Hard difficulty. Once you’ve achieved this, there are a few other trophies to get, but nothing should be scaring you after doing those objectives! Are you up to the challenge of adding a new Platinum to your collection? 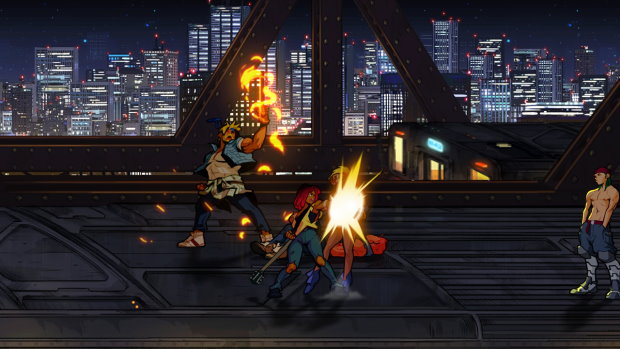 DotemuDotemu, LizardcubeLizardcube, and Guard Crush GamesGuard Crush Games took a risky bet in reviving one of the best franchises in gaming history, but what they did is not only bring the series back with a sequel that lives up to the name, they also released a game that shows what a beat ’em up title should be. This is a must-buy title, and I hope we won’t have to wait another 26 years for Streets of Rage 5! 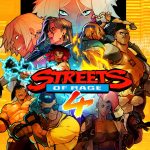 The Streets of Rage series is back in style!

Disclaimer
This Streets of Rage 4 review is based on a PlayStation 4 copy provided by DotEmuDotEmu.

Task Force Kampas Out Next Week