In 1917, a trans-Serbian train crashes in a snowy hellscape, and four survivors must work together to survive, not just their environment or the hunters trying to find and murder them but also each other because humans. Even in the most desperate of times, when shutting up and working together for the common good would be wise, we still have to put our politics and prejudices above all else instead of looking at the bigger picture. But who knows, maybe the survivors will endure long enough to be rescued because Help Will Come Tomorrow…right? 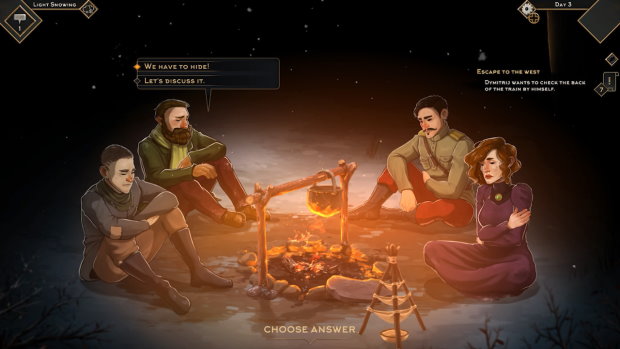 Arclight Creations, a small Polish team, venturing out into their first attempt at a survival/resource management sim game, is the group behind Help Will Come Tomorrow. Surprisingly, for a group of first-timers, there is a lot of polish, imagination, and presentation that makes this game an interesting experience, but some design choices and a few bugs make what should be an immersive experience turn into a frustrating one. Visually speaking, this is a beautiful game. The art style of the opening cinematics and the individual characters are exceptional, the limited but expressive nature of the characters goes a long way to tell the underlying story of being thrown into such an overwhelming situation against their will. The overall quality and hard work from the team can be seen at every point of the game.


After the opening cinematics, your randomly selected group of four (from a pool of nine) survivors find themselves in a clearing in the forest, which will act as your home base. There you will be able to build and improve upon the five main pillars of your base. There’s the campfire, which is where you can create food and water for your group. Shelter, where members of the group will be able to rest and regain energy, a workbench to create new tools, a nursing station to help take care of members of your group who become sick, and a palisade which is used to help protect against the elements. 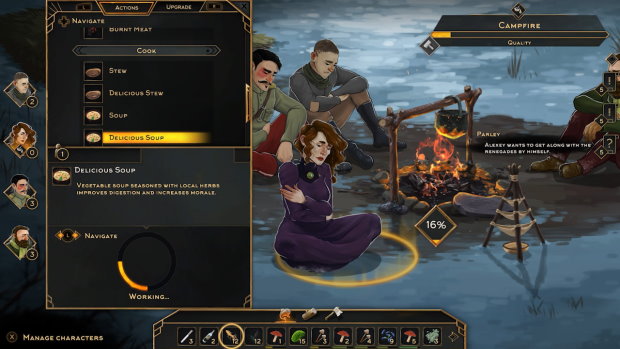 As is expected of a resource management game, you will only have a limited amount of supplies and resources, so you will have to decide which specific actions are best suited to your group’s needs. Depending on the difficulty you choose to play on and the current state your group finds itself in, each character will be able to generate around three action points per day. It is then up to you to decide which aspect of their needs are more pressing and require your utmost attention. Some actions only require one AP to accomplish, and these can be done by one person without any problems. Some tasks will require three points, so you can have someone work alone or to have two members of your group working together. This is where the politics of the game come into play.

Due to their political or social backgrounds, some characters will not work well together, and it might be in your best interest to keep them separated. If a character is forced to work alongside people they either do not like or do not particularly get along with, their morale can go down, and in the long run, this can have an adverse effect on them and the group, but as things become more desperate, you may have to force everyone to work together regardless of their beliefs. Each character has individual traits that unlock under certain circumstances that can either help or hinder progress. For example, one of the characters likes doing repetitive tasks, so having them doing things like spending the whole day filtering water might be a wise move whilst having the character who finds repetitive tasks boring do a multitude of other things. 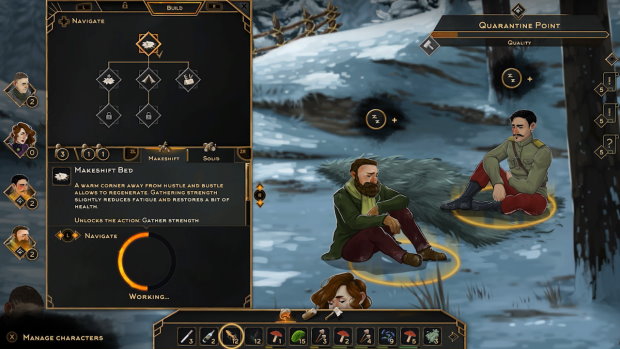 But after the day comes the night. During the night is where you have a chance to learn the personal stories of the different characters and how they ended up on the train. You have a chance to choose two of several topics that are either have to do with the current situation or with each of your survivors’ pasts. These opportunities can also help improve characters’ relations and morale, but, as expected, they can also have a negative effect. It is down to you to decide whether or not you want to keep the character’s integrity and keep their own morale up or be more agreeable to help keep the other members of the group happy. Juggling this group dynamic is an intriguing aspect of the game as you don’t always know how each character can react to a situation, and knowing is half the battle.

A majority of this review is based on time spent prior to the day one patch. Prior to the patch, the game relied heavily on your remembering many things because after a status or a new trait had been received by a character, the game did not explain anything, and you were left on your own to figure out what a lot of the icons meant. Even then, an abundance of resources would not get a name check, and one playthrough saw me feeding my entire camp a fist full of poisonous mushrooms simply because I had no way to figure out that every single item of food that I had foraged during that playthrough was poisonous. You would not be surprised to know that everyone died soon after that! 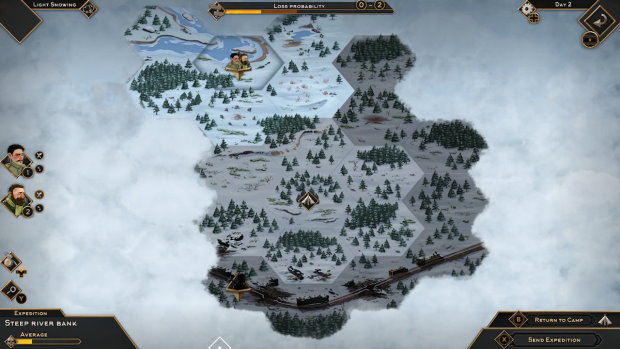 Speaking of dying, expect to have people die a lot during your time with Help Will Come Tomorrow. Death of camp members is par for the course in a game like this, but sometimes the deaths can feel a little unfair. From day two onwards, your party can come across certain events as they go and explore their immediate surroundings. By sending out expeditions into the wilderness, the party will be able to gather resources and, on rare occasions, encounter other survivors. What you will encounter more of, however, is local wildlife and thugs.

Thugs are the people who blew up your train in the first place and are also scouring the forest for any survivors, and the longer you survive and expand your search area, the more likely you are to encounter them or have them discover your camp. As you can imagine, having them discover your camp means certain death. With this in mind, I stocked my camp with a small arsenal of weapons for the inevitable day that the camp would be discovered, but even then, a game over was still unavoidable. I did have enough weapons for everyone in the camp to be armed, but this did not seem to be enough for them to survive, which did seem a bit odd. 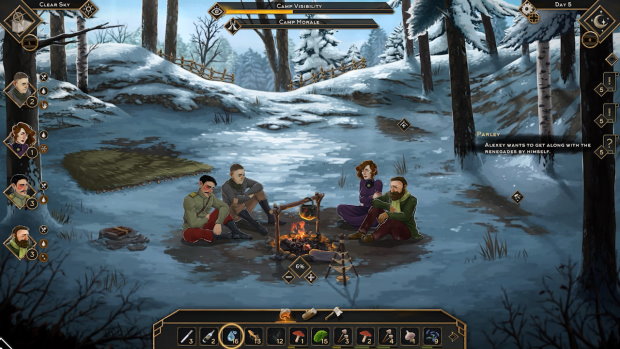 For the most part, the writing in the game is solid. From the little character stories as they unfold to the choose your own adventure style scenarios you encounter in the wild, each situation is engaging to a high degree and is strong enough to keep you coming back even though the game itself does everything in its power to dissuade you. The adaption of a game to a console that is clearly better suited to a PC is a respectable affair held back by some controller choices, but soon become less of an issue when you eventually adapt to them. I will say the decision to have the “Take All” button be the same as the “Delete” button was probably not a good idea, as several of my playthroughs were completely ruined or abandoned immediately after finding a highly sought after resource, only to accidentally delete it due to poor button mapping.

Another minor note is the odd decision not to animate the characters standing up. It took me out a little to see the characters in their sitting animation move to complete a task that clearly required them to be standing up. The recycling of the animation of them sitting around the campfire, which looked perfect there, certainly looked awkward in any other context. The last minor niggle of note is the loading times for the game. Initial load times seemed a little overly long, and with the odd one or two crashes I experienced when playing, I found myself wondering whether or not the game had crashed whilst loading and could not tell me, so I ended up maybe restarting a little more than was necessary. 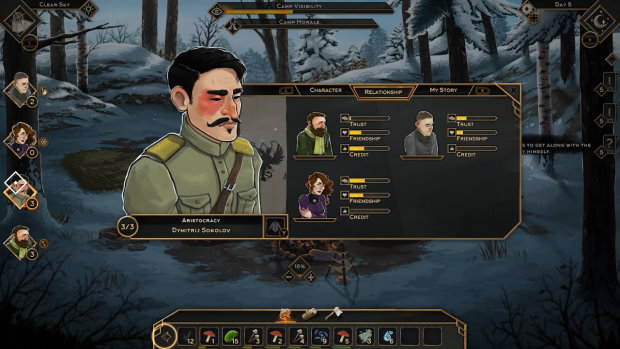 In summary, had it not been for the day one patch that went through great lengths to fix a lot of the issues noted in the review, I would not be recommending this in any capacity. But with the update, which added more context to the gameplay, a lot of it now becomes a compelling experience rather than a pain. Help Will Come tomorrow is a great character study and a snapshot of a period in time that resonates throughout history. The soundtrack is gorgeous, if a little repetitive, the characters are intriguing, and the bleak, nihilistic world they find themselves in is engrossing. If you are a fan resource management games, then this one will definitely scratch that itch on PlayStation 4.

Disclaimer
This Help Will Come Tomorrow review is based on a PlayStation 4 copy provided by KlabaterKlabater.