Treachery in Beatdown City from NuChallenger and HurakanWorks is a new turn-based 2D beat ‘em up RPG that is now out on Nintendo Switch. NuChallenger took Treachery in Beatdown City to Kickstarter way back in 2014 with a $50,000 funding goal. Even after gaining the support of almost 500 backers, the project did not manage to reach its goal before time was up. A month later, a new campaign was started for the game, this time around with a $49,000 goal in the crowdfunding platform. The project managed to secure a little over $50,000 in funding from more than 1,200 backers, who looked forward to playing the game in the estimated February 2015 release date. Since it’s now 2020, you can probably figure out the game did not release back then, for many reasons.

The game’s developer took Treachery in Beatdown City back to the drawing board, making changes to the overall art style, and increasing the overall content the game would eventually offer. Life got in the way as well, and one thing after the other got in the way of the development of Treachery in Beatdown City. Things started to pick up in 2018, with 2019 being the “home stretch” for the game, leading up to its release this year. The big question then is: has it been worth the wait? Let’s find out! 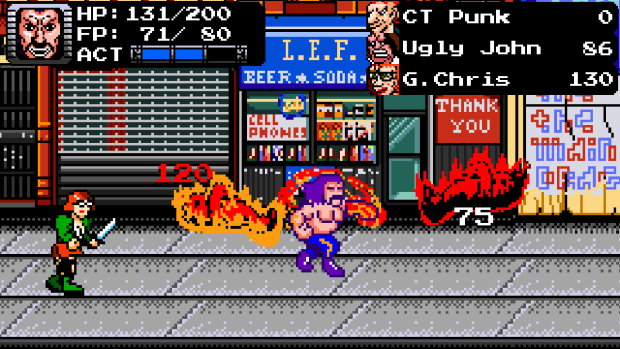 As you start the game, you will learn that 3rd term President Blake Orama has been kidnapped during an address at the UN. He was going to announce an anti-ninja drone program that would aim to stop the global rise of ninja-related terrorism. As you can probably imagine, this is something that the Ninja Dragon Terrorists were not going to take lightly, which is why they attack after cutting the lights and end up kidnapping President Orama! They demand 1 Trillion Dollars to release him alive.

Mayor Mike Moneybags, the billionaire Mayor of East Fulton, immediately calls for a press conference, during which he suspends the police department because, he says, the numbers don’t add up and there’s no budget for it. Because of this, he announces a citywide vehicle lockdown in and out of East Fulton. This forces Police Chief Antonio Santiago to call a trio of heroes who can save the day: Lisa Santiago – his daughter -, Bruce Maxwell and Brad Steele. Together, they will take on the Ninja Dragon Terrorist and bring back President Orama! 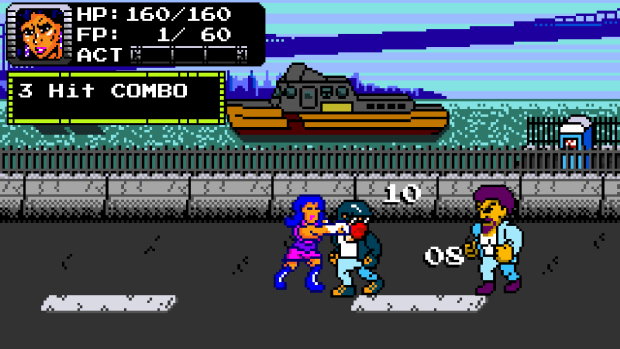 In Treachery in Beatdown City, you’ll be taking on some bad dudes in a battle system that at times reminded me a bit of the beloved cult classic Hybrid Heaven from back in the Nintendo 64 era. Since you’ll be fighting with a turn-based RPG system, this adventure will pay homage to classics in the genre like Final Fight, Double Dragon, River City Ransom, and Streets of Rage, while certainly doing its own thing. This is immediately evident in the three main characters you will get to play as, who could easily fit any of the aforementioned games, between the overclocked 8-but console style of the in-game graphics and the big splash image of each one of them that is included during the intro story sequence.


The first handful of stages will serve as the game’s tutorial, introducing each of the main characters and giving you some pointers on how the game controls. You will use the left analog stick or the D-Pad to move your character, as you’d expect from a 2D beat ‘em up. Your main attack is mapped to the A button, which is also used for picking up stuff. With every action you take, you will use up some of your Fighting Points (FP). Your FP will fill up as you walk around, avoiding coming into contact with your opponents, up to your character’s maximum. You can press the X button when near an opponent to bring up the main Action Menu, from which you can build some custom combos! 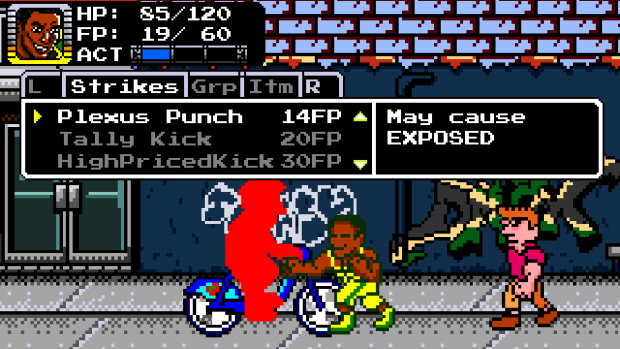 
FP is also important when you’re in Defense mode. When an enemy attacks you, the Defense Menu will pop up. If you have some FP left, you can Block, which will give you a 50/50 chance to block the attack, thus lowering the damage you’d receive. If you have no FP, your only option will be to select the Brace move, which will allow your enemy to deal full damage. The good news of this is that you’ll be able to save whatever FP you have by using the Brace move, which might allow you to make a comeback. 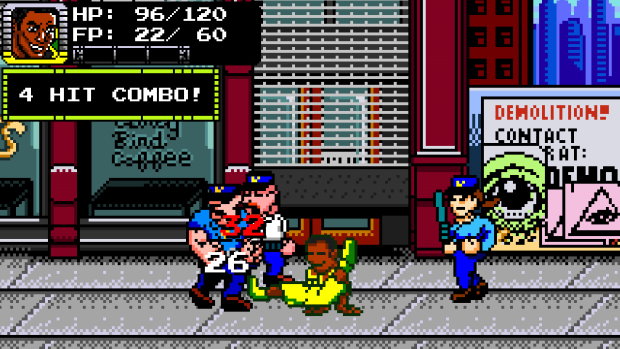 As you fight in each stage, you will end up losing some of your hit points (HP). To recover, you should check out any nodes with a snack machine, so that you can use your quick strikes with the A button to knock some snacks out of it. Once something pops up, walk over it and press the A button to eat it so that you can recover your lost health before carrying on with your quest to save President Blake Orama! If you’re not careful, your hit points can and will run out, leaving you down for the count. 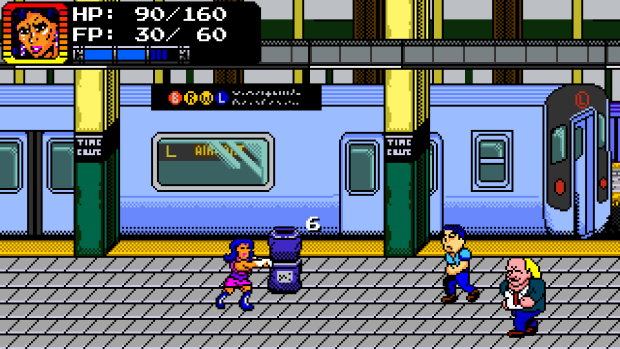 While exploring the game’s overhead map – which reminded me a bit of the original Teenage Mutant Ninja Turtles game on the Nintendo Entertainment System (NES), you might find some dumpsters. These dumpsters will act as treasure chests of sorts, containing valuable items that you should always collect. Items can be used while in a fight – as long as you have some bars in your Action Meter – to recover some of your lost health, or to provide a boost to your FP so that you can stay alive and get the energy you need to block, grapple, and punch your way to victory! 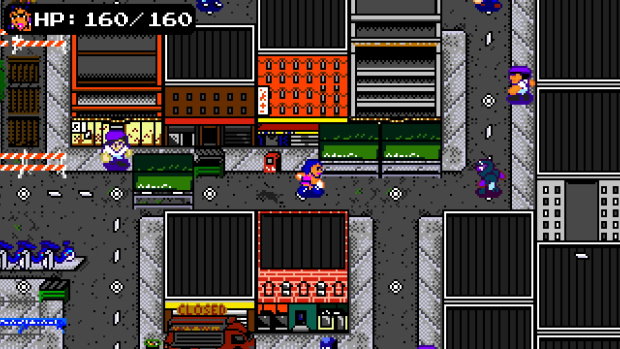 As a fan of beat ‘em ups – and as someone who has been following the development of Treachery in Beatdown City since the first Kickstarter campaign – I was definitely looking forward to playing the final version of the game. I had a lot of fun playing it for my Treachery in Beatdown City review, since each of the characters felt different thanks to their pros and cons, as well as their focus on a nice variety of attacks and grapples, keeping me entertained for hours. It’s been a long wait, but, in the end, it’s been worth it, and you should check out Treachery in Beatdown City on Nintendo Switch!

Disclaimer
This Treachery in Beatdown City review is based on a Nintendo Switch copy provided by NuChallenger.