[Beyond PlayStation] One Step From Eden Review


Before moving forward with this review for One Step From Eden from Humble Bundle and Thomas Moon Kang, let’s get one thing out of the way: One Step From Eden is an homage to the great Mega Man Battle Network sub-series, which got its start on the GameBoy Advance back in 2001. The overall basic gameplay mechanics from the game are carried over to One Step From Eden, along with some extra bells and whistles you’d expect from a game released in 2020. There’s also the change from the technology setting of Mega Man Battle Network to a fantasy theme, with spells and all that jazz. 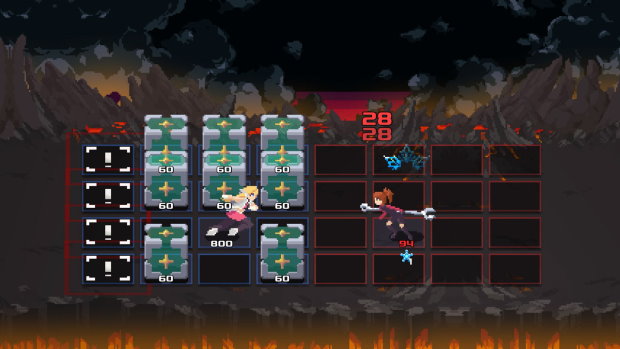 At the start of your adventure in One Step From Eden, Saffron will be the only character you can select, but as you progress through the game and do this and that, another eight characters will become available. Each of them will have a short description – as well as some really cool looking high-resolution art – along with a list of spells, artifacts, and weapons at their disposal. You can also unlock additional outfits to customize how a character looks, in case you want to spice things up a bit.


With One Step From Eden placing a big focus on its battles, you’ll be moving your character around with the left analog stick or the D-Pad by pressing up, down, left, or right. Your character will be placed on one side of a blue-colored four by four grid, with your opponents placed on the other side on a red-colored four by four grid. Your main weapon is mapped to the ZR button, and it will be able to deal some damage to enemies, but not as much as you can deal with spells. Speaking of spells, they will be mapped to the B and A button for Spell 1 and Spell 2, respectively. 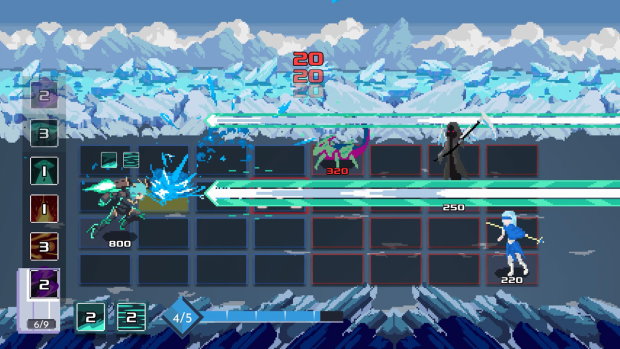 Spells need to be used one after the other as you plan your actions based on how much energy you have available at all times so that you’re not caught without any spells when you need to deal the final blow. You don’t have to worry too much since new spells will be dealt into your hand soon after, but there is a degree of strategy in the game’s battles. Each of the spells will have different attack patterns – some might hit four grids ahead of you, others might target several tiles in a row, etc. – so you need to be aware of this, or you will fail in battle. You can shuffle your deck with the ZL button in hopes of obtaining a better set for your current predicament.

As you win each fight, you will be rewarded with experience points, as well as the potential to add one card to your deck. Spells can also be upgraded, thus becoming more powerful, but if you do so, then each spell will cost one extra point per upgrade. You can change your deck around as needed to prepare for each battle so that you can have the right loadout to survive against each particular set of enemies. Being able to slide in and quickly unleash a powerful Thunder on one row while you move to the other to use a Kinetic Wave to push enemies away, all as you use your regular weapon to chip away at your enemies’ health points, could be the difference between carrying on with your run in this roguelite and having to start from step one. 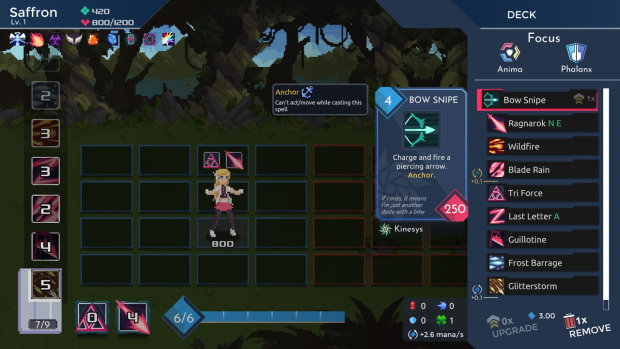 You will get to select which paths you take on this roguelite experience based on the map you get from the randomly generated content, and each node will have a different objective for you to complete. These will include nodes with things such as Battle, Hazard, Distress, Camp, Shop, Treasure, or Mini-Boss. Battle nodes are the regular fights you will take on during most of your time with One Step From Eden. Hazard are battles in which, along with enemies to defeat, you will also have to keep in mind that you will have to avoid a hazard – think, for example, a small volcano that shoots out rocks that will damage you. Distress will have someone you have to save, so you will have to avoid dealing any damage to it as you find a way to defeat any enemies.

Camp nodes are very important since they will provide you with a chance to heal up some of your wounds, as long as you’re fast and grab the healing pickups dealt by the camp’s bonfire. Shop nodes offer you the chance to use your money to purchase artifacts, spell cards, or enter into a pact to, for example, take 140 damage to gain 25 money. You can also pay to refresh the shop’s stock, upgrade a spell, donate blood in exchange for money, or pay to remove a spell from your deck. 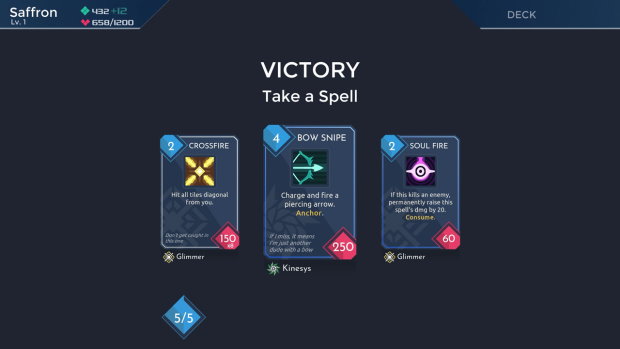 For Treasure, there will be a treasure chest on the battlefield, which you need to open up as soon as possible! Mini-Boss, as expected, will present you with a Mini-Boss to battle, which will dial up the challenge when compared to regular Battle nodes. And once you get to the end of the path for a region, you will face a Boss Battle. Apply everything you’ve learned until that point, pay attention to the movement and attack patterns of your opponent, and make the most of what’s on your deck to try and win. Defeat the boss, and you will complete the stage so that you can get to select which area type you’re going to visit next.


By leveling up, you will get to select an artifact that will give you a small stat boost or give you an extra bonus when certain situations are in play. You might get a boost to your mana regen, or perhaps you could get a bonus to your overall defense while you have Flow active. You can also be rewarded with an Upgrader, which is needed for you to be able to upgrade your cards, or maybe you can land a Choco Mint Chip, which will slow enemies down when Frost is being applied. There are many options to choose from, and you will get three artifacts from which to pick every time you level up! These will only apply to that particular run and are different from the more permanent stuff you can get. 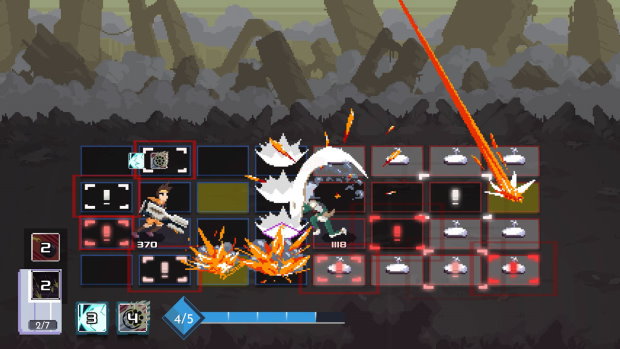 Depending on how you do in your run – how many nodes you complete, the number of kills you get, how many mini-bosses and bosses you defeat, etc., you will be rewarded for your efforts. You will receive a different type of experience points that will be added to your total, as you work towards unlocking some permanent stuff to add to your run. You could, for example, end up unlocking new spells for subsequent runs, or you might unlock new artifacts that will pop up as rewards from completing nodes, or as options for you to buy at the shop. You’ll eventually unlock additional characters and other stuff as well.


The game has a Library section in which you can check all spells and artifacts in the game. Those that you’ve already unlocked will have their name and effects displayed, while those not yet in your possession being displayed as “???????” while showing what level you need to be to unlock them. You can sort this list in alphabetical order, or change that sorting by rarity, damage, mana cost, shots, or focus. There’s also a search bar on the left side of the screen where you can directly search for any of them if you know what you’re looking for! With over 200 spells and more than 100 items, there’s a lot to collect in this one! 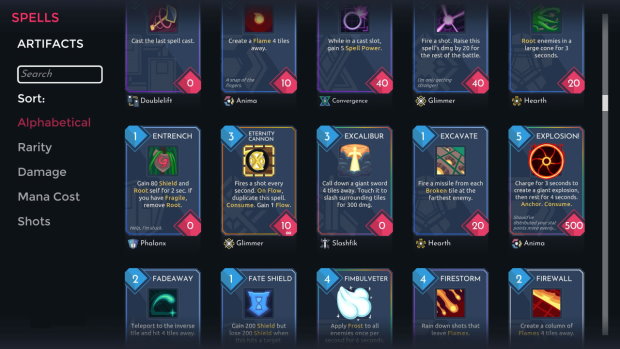 As a fan of the Mega Man Battle Network series, I was certainly looking forward to checking out One Step From Eden on Nintendo Switch. It’s a solid roguelite with randomly generated content that will keep you coming back for more after you’re defeated. It’s out now on Nintendo Switch for $19.99. 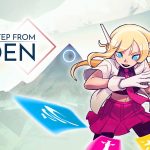 One Step From Eden Review

Game title : One Step From Eden

Disclaimer
This One Step From Eden review is based on a Nintendo Switch copy provided by Humble Bundle.

Tin & Kuna Out This Fall On Consoles