In Neon City Riders from Mecha Studios and Bromio, you’ll take on the role of Rick, an urban vigilante who is trying to do as much good as possible in the decaying futuristic Neon City. The city was devastated after the Android Revolution, and it’s now up to you to take on the four rival gangs to save the city. Before you dive into this new adventure, you’ll be aided by Evergray, who will have you take his virtual reality simulation of Neon City for a spin so that you can get some practice under your belt before you go on a crazy spree, as vigilantes do. This will be the game’s tutorial section so that you can get the hang of things before you start to break some skulls. 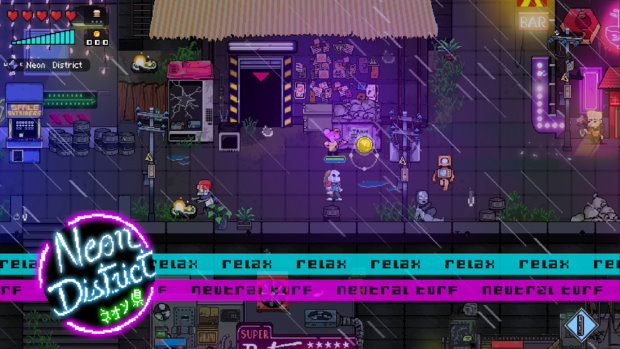 The game use this VR simulation/tutorial to give you a taste of the abilities you can have once you defeat all of the gangs and claim their territory – think of it as not having all of your abilities when you take on Super Metroid. You’ll move rick around the top-down world with the left analog stick, attacking with the Y button, and interacting with the X button. As you explore the virtual reality training area, you will get to find some pins that will grant you new abilities – which, again, you will lose once you’re out of the simulation. 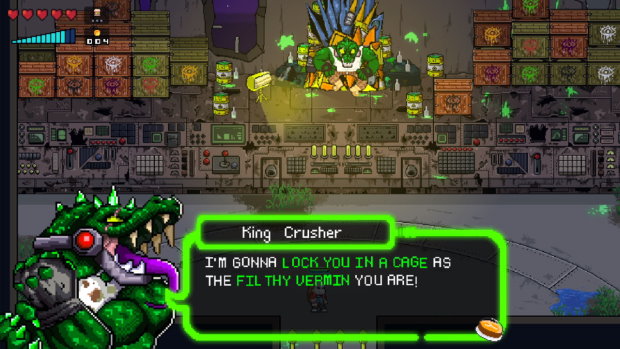 This includes a Skull Dash that can allow you to press the B button quickly move out of the way to avoid danger, as well as to destroy some wooden objects – at the cost of some of your mana. You can also find one that will grant you Tempered Armor, which will allow you to dodge damage – with a short window of opportunity – as well as parry attacks by pressing the A button. There’s also the Echo Strike, which allows you to reflect some enemy projectiles and send them flying in another direction. This is done by pressing and holding down the ZL button and pressing the Y button to attack. The last pin is for the Underfield, which will allow you to make good use of the color-changing marks that will let you know something is hidden nearby. Press the R button to activate this one. 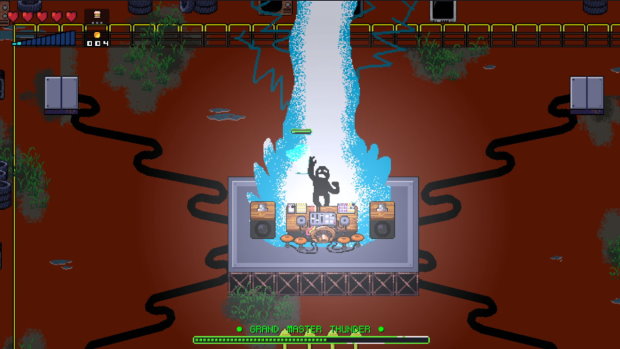 You won’t be able to just button mash your way through each fight, because, if you’re not careful, enemies can and will deal some considerable damage to Rick. You need to be aware of each enemy’s attack pattern so that you’re not caught off-guard. They will telegraph this by showing a white outline of their attack’s range so that you can get out of the way before they can land a hit. Waiting for the right time to dodge an attack is key, since enemies will be dizzy right after this, and that’s the perfect time for you to rush in and lay the hurt down.


To recover your health, you’ll have to eat and drink your worries away, so that you can recover from the damage you’ve sustained. To do this, you’ll need to spend the money you collect from the enemies you defeat, but in the simulation tutorial, you’ll get to eat for free. Who doesn’t like some free virtual ramen? Once you have some coins on you, you’ll be able to make good use of the vending machines to buy you a hamburger or a slice of pizza to bring you back to life. Just be careful because when you eat by pressing the L button, you will need a second or two before you recover some of your health, so be sure to stay away from enemies while you eat! 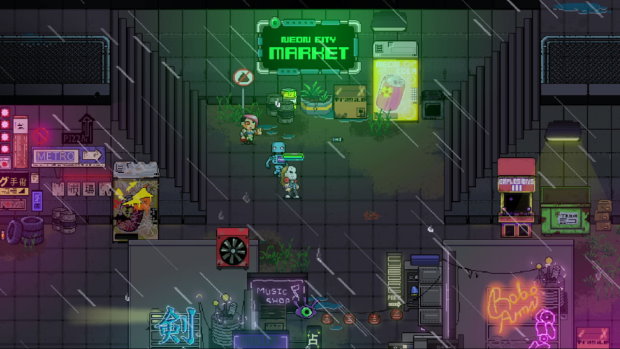 Once you’re out of the VR simulation – after beating your grayscale shadow doppelganger – a large shadow creature will take your powers away. Because of this, you’ll have to explore the four turfs that are under the control of each of the gangs, so that you can search for clues that can lead you to find the four pins that will restore your abilities.

You can press the + button to use a device that will show you the items you have on you, the abilities you have collected, which gangs you’ve defeated, a map of the whole city (which you can also access directly by pressing the – button), which can be marked on a grid for the areas that you have already explored, the quests you’ve taken on, your journal with a timeline for the game’s story, and a look at the controller setup. You can also spend some of your credits to get map hints added to your map so that you can know where an area of interest might be located. If you want to save your game, you can do so by hitting any of the punching bags you’ll find during your quest. But, just in case, the game also saves automatically when you change rooms. 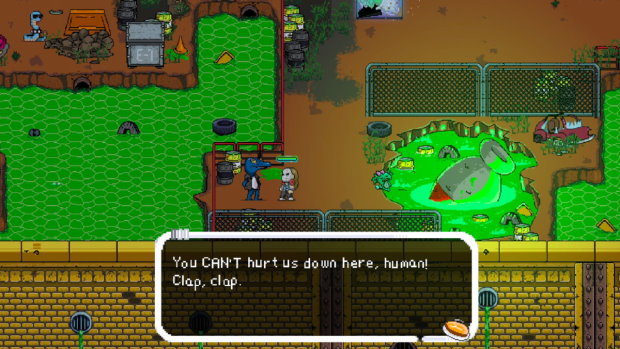 Neon City Riders also has an in-game achievements system with different objectives for you to complete in order to 100% the game. There are achievements for defeating 100 members of each of the four gangs, for defeating 100, 500, and 1,000 enemies in general, for discovering all of the fast travel booths, for eating all of the types of food and drinks on offer in Neon City, a set for defeating each of the bosses without using any items to recover your health during the battle, to name some examples. 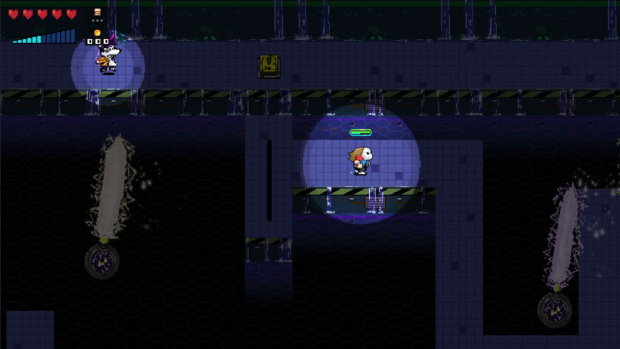 Neon City Riders is a fun and challenging top-down action game that will keep you busy for a while. I loved the art style and soundtrack for the game and didn’t have any issues with the overall difficulty, and always had a quest to complete or something to do, but your mileage may vary. The team at Mecha Studios has been listening to players’ feedback and has issued a patch – that should be live on Nintendo Switch any time now – that will rebalance the difficulty, fix some typos, and Cypher Kid, from whom you can buy maps for each of the four turfs with some extra info. Neon City Riders is out now on Nintendo Switch for $19.99.

Disclaimer
This Neon City Riders review is based on a Nintendo Switch copy provided by Bromio.

Evan’s Remains On Its Way To PS4 And Nintendo Switch