Greetings and Salutations. Your mission is to defend the planet from invaders. Join Colin and Chris as they save Earth. Check our Twin Breaker: A Sacred Symbols Adventure review!


While World War distracts the nations of Earth, an isolationist United States obsessively sends generation ships to nearby star systems to find new planets for America to colonize. But once in interstellar space, the ships mysteriously disappear. When clues emerge as to the whereabouts of the missing spacecraft, two talented pilots jump through a wormhole and into the unknown in a story-driven brick breaker in the spirit of Arkanoid and Breakout.

Twin Breaker is an ode to both the past and the future. The game is developed by Lillymo (Perils of Baking, Habroxia) and written by long-time PlayStation media personality and podcast host Colin Moriarty.

Twin Breaker: A Sacred Symbols Adventure is a new brick breaker brought to us by Lillymo Games. The catch is that it was written by Colin Moriarty of Colin’s Last Stand/Kinda Funny and IGN fame or (infamy depending on your opinions of him). Since his split with the team at Kinda Funny, he started a new PlayStation Podcast with Chris Raygun called Sacred Symbols. While Colin has been in games journalism for years, it was always a dream of his to be involved in the development of a game. I’ve followed Colin for years since back in Podcast Beyond, but I am a lapsed listener and haven’t been following Sacred Symbols that much. I was still really curious about the game and glad to get my hands on it.


As mentioned Twin Breaker: A Sacred Symbols Adventure is a brick breaker in it’s purest sense. There is a twist though, instead of one paddle, you have two, one on the left side of the screen and one on the right. You control one with your left stick and one with your right stick. It’s a bit odd to get the hang of at first. As the ball bounces, you need to eliminate the bricks and make it to the end of the level. 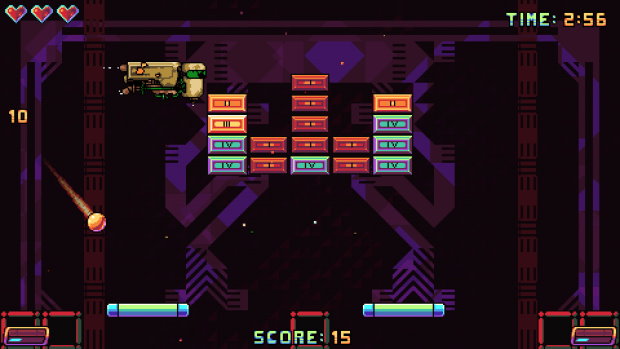 As you eliminate bricks, you will see some of the standard power-ups or de-powerups fall down, and you can catch or avoid them. Some of them will include boosts such as a multiball, speed up, slow down, heavy – which will just plow through instead of bouncing back for a short period, make the paddle longer, or shorter, or add shooting. There are also scarabs that will fall from some blocks that will take some points away, and slow the paddle down if they hit it.


What really keeps the game going though is the changes in the formula. At first, it’s the two paddles at the bottom, but as levels progress, they are then added to the left and right side of the screen, making it look like pong, shifting the gameplay considerably. Then the final change in the gameplay will have your paddles on the bottom and the sides. The left analog stick up and down will control the side, and the right and left will control the bottom one and the reverse for the other paddle. It definitely takes some getting used to and might break your brain a little bit until things click. 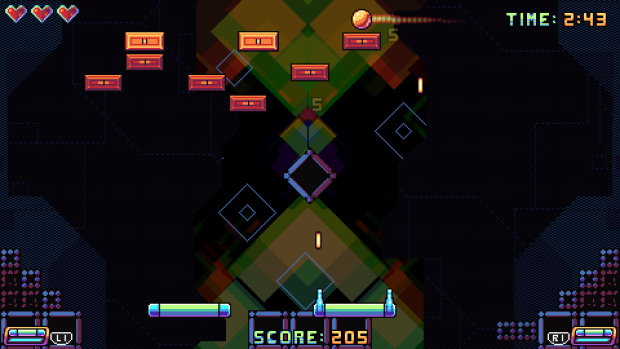 Twin Breaker: A Sacred Symbols Adventure has 40 levels that you will go through, including some unique boss fights every ten levels. What I really liked is that you can pick up at any level if you die, not making you start from the beginning. Once you beat the original 40 levels, you will unlock a harder difficulty for a New Game+. That’s not where the gameplay stops though, there are many extra modes as well.


There is a Marathon Mode, Pong Mode, Random Mode, Shooter Mode, Catcher Mode, and even a Boss Rush Mode. I want to highlight a few of them that I really enjoyed. The Shooter Mode is a high score chaser option, and it permanently adds the shooter power-ups to your paddles, with blocks dropping from the sky, si you have to shoot them down before they get to the bottom. Catcher Mode is similar but with coins falling, and you need to catch them with your paddle as you try to beat your high score. Boss Rush Mode pits you against the four bosses repeatedly, it was the mode I had the most fun in. There is a significant amount of content in the package! 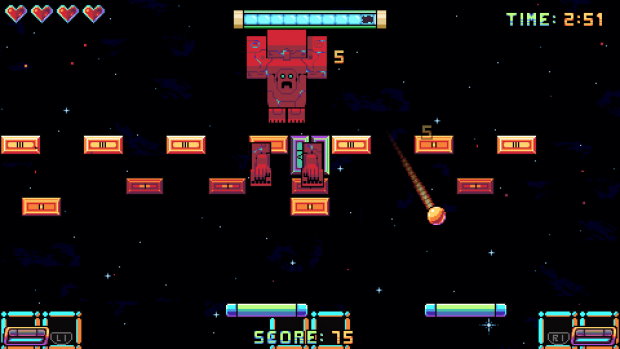 The big pitch for the game in the trailer was that it is a brick breaker with a Story Mode, which is something you don’t see in brick breaking games, and that Colin wrote it. I was really curious to see what such a Story Mode would be like, and, honestly, there are mixed results from it. Colin has libertarian political leanings, and his views showed through in the story. If I wasn’t sure where he sat on the political spectrum, I don’t know if I would have picked up on it or not. I do like the fact that Colin and Chris are the main characters, and the two brick-breaking ships are also named Greetings and Salutations, his intro when hosting podcasts. It’s so Colin and a little on the nose, but it’s full fan service, and I think his fans will appreciate it.

The game is Cross-Buy on PlayStation 4 and PlayStation Vita, and each version of the game has its own trophy list. I was glad to once again take a trip to Vita Island since every month, fewer games are released for Sony’s portable console. It plays just as great on the PlayStation Vita, reminding me of how great the system is. The trophy list was great as well, all named after some of Colin’s favorite music. It’s a fair trophy list that is not too easy but just the right difficulty. 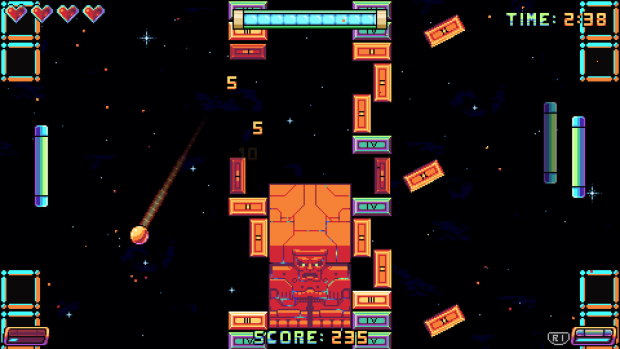 I enjoy brick breaking games, and Twin Breaker: A Sacred Symbols Adventure did a really nice job by adding the two paddles and the story mode to the formula. I do think near the end with the four paddles, it can get a bit tricky to play, but you do get the hang of it eventually. The story is a bit verbose, but that’s Colin’s style, and it’s filled with fan service that his patrons and fans will love, but it could keep others away.

Disclaimer
This Twin Breaker: A Sacred Symbols Adventure Game review is based on a PlayStation 4 copy provided by Lillymo Games Inc.

Gigantosaurus: The Game Out Now