Welcome to the first POWGI release of the year, this time exploring the hangman word game. Come find out if it’s worth playing in our Just a Phrase by POWGI review!

This is a double review for Just a Phrase by POWGI Review. Ceidz and ThaRaven403 played the game, and this review presents what they both had to say.


Just a Phrase is a deduction game based on the classic pen-and-paper game, hangman, but this variation has a twist inspired by the pun-oriented wordplay that is typically found in the POWGI series of games

The game starts with a simple hangman pattern. Each time you start one of the 120 puzzles the game has to offer, you are presented with a phrase shown with underscore characters. On the right side of the screen, you have the choice between four letters that are mapped to each of the four face buttons of your controller. Once you choose one of the letters, each of the empty spots in the phrase is scanned, and the selected letter will appear in the spots it’s located.

If the selected letter isn’t in any spot of the phrase, it’ll end up at the bottom of the screen. In the worst-case scenario, you’ll have to get through all the letters of the alphabet until you have completed the phrase. To make things a bit more challenging, there’s always a word that’s been replaced with a homophone. This makes things a bit harder because even if you find the expression, you’ll probably have to try a few letters before finding the replaced word. 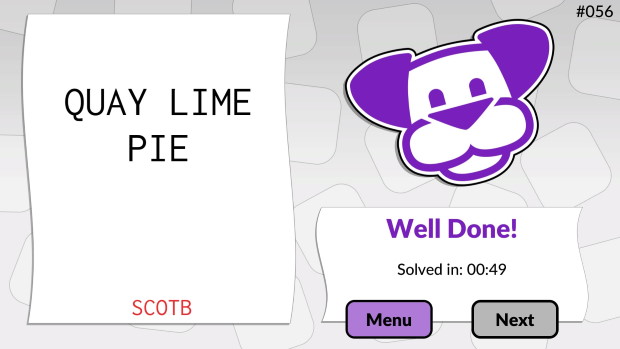 While I found the concept fun on the first few puzzles, it’s a feeling that didn’t last long. Since you don’t have any clue about what sentence you are searching for, you’re pretty much randomly hitting any letter until you correctly find some. It didn’t take long before I was just hitting the buttons over and over until all letters were added since I didn’t know what I was looking for. By the time enough letters were in place to guess the phrase, there was no incentive to do things right as I could just hit the few letters that were left.


If you’re in for the trophies, it’ll be a relatively easy time to get that Platinum trophy twice if you’ve got a Playstation Vita. There are 26 trophies related to finishing a puzzle with the last letter you choose being each and every letter of the alphabet. Other than those, there are a few trophies that you’ll likely get naturally while going through all the puzzles, and if not, you’ll easily be able to reload a puzzle to complete it with the necessary conditions for the trophies. 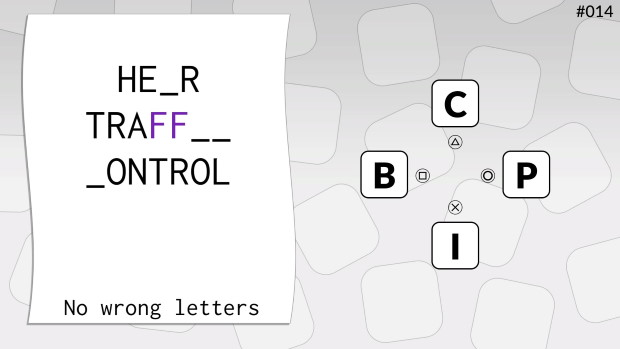 As ThaRaven403 mentioned, this word game is, in fact, a hangman-style word search in the sense that we must find the hidden expressions by selecting the available letters. POWGI games are different from the usual word games, and this time, we must find expressions that contain a homophone.

As the game starts, you land directly o the selection screen, and there are 120 different puzzles to complete. As for the gameplay, it is pretty much basic: you have the choice of four different letters each “round.” You select one then see if the letter was used in the expression or not. There aren’t any consequences for getting a wrong letter, so you can effectively mash a single button to get through the entire game. The gameplay is so brainless in fact that at one point, I gave the controller to my eight-year-old daughter, and she took on playing part of the game for me to get my Platinum trophy.

Most of the trophies are awarded for finishing a puzzle with a specific letter, and that means there are 26 trophies like this, one for each letter of the alphabet. This is easier to do when you have an idea of the resulting sentence so that you can guess accordingly. The four last trophies will take a bit longer to since they require you to actually finish every puzzle the game has to offer, so achieving the Platinum trophy will take roughly a couple of hours. 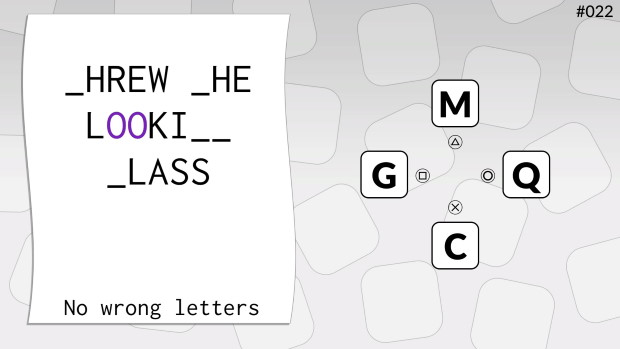 The Background themes offer remixes of the classic POWGI themes we’ve heard in the latest releases. Most of the themes are reused from previous titles, but I noticed a few new background themes which added some variety to this one. As for the puzzles themselves, some were hilarious, and others were less funny. All in all, a lot of thought went into the creation of those 120 different puzzles.

I liked how the gameplay was presented, but be warned that the “word game” style is taken to a stretch here, and this is probably the most casual POWGI release yet. I liked this game, but my favorite POWGI release is still going to be the very fun Word Maze


Final Thoughts
Just a Phrase by POWGIis a great word-based game to play on your PlayStation 4 and PlayStation Vita. We liked playing through the different puzzles but eventually thought that the gameplay was more casual than what we got from the other POWGI releases. Mashing a single button can (slowly) take you closer to adding a new Platinum trophy to your collection. We can still recommend this release for trophy hunters.

Disclaimer
This Just a Phrase by POWGI review is based on PlayStation 4 copies provided by Lightwood Games.

Jump King On Its Way To PS4 and Nintendo Switch