The first thing you’re going to notice is that unlike its predecessor, Super Destronaut DX, which was a neon-infused take on the beloved Space Invaders formula, Super Destronaut: Land Wards changes things around considerably by giving us a neon-infused first-person shooter (FPS)… and I certainly was not expecting that when I learned that a sequel was in the works! 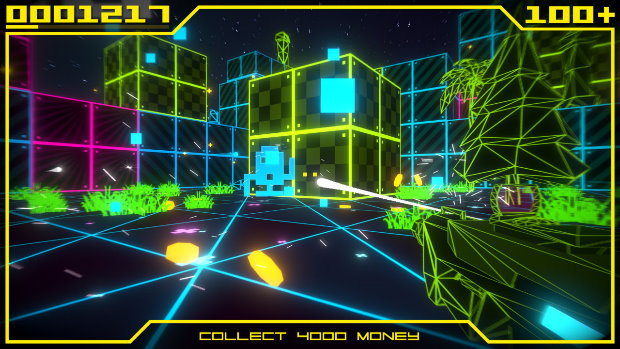 Because of this, you won’t be shooting at the alien invaders from the bottom of the screen as they slowly but surely move closer and closer to the bottom. Instead, you’ll be moving with the left analog stick, aiming with the right one as you run around the colorful stage. You can jump with the L1 button and shoot with the R1 button, obtaining points from every game you destroy, all while collecting the coins they leave behind after exploding.

These coins can then be used at the one store spot on the stage to purchase stuff that will help you stay alive. There are boosts to your overall health total, a coin magnet ability that will pull coins towards you, a boost to the overall number of coins you get, more speed for your character, better protection so that you take less damage, and more. You can purchase additional weapons, such as a shotgun, a laser gun, or a rocket launcher, which you can change around with the Square and Triangle buttons. 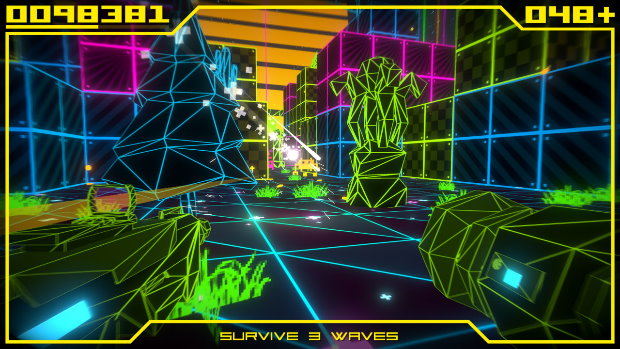 You’ll need to change from one weapon to the other because some weapons are more suited for specific situations. Bunch of enemies grouped on a corridor? Perhaps you might want to use your grenade launcher to set a grenade on their path so that they all go boom at the same time. Facing a group of enemies coming at you from three different directions in front of you? Then maybe a shotgun is just what you need to get the job done. Your starting weapon is not as bad as I had expected, but the further you progress into a wave, the more you’ll realize that you need better firepower.


All enemies are the same colorful hue as they were un Super Destronaut DX, but now they’re moving on the 3D plane. Some enemies will just jump up and down in joy without changing where they stand, while others will jump towards you in their attempt to ambush you. Others will teleport around as they attack, and then there’s the big red UFO-like enemy that on the 2D prequel would be at the top of the screen. In Super Destronaut: Land Wars it’s the enemy with the most hit points and the hardest hitting attacks, and it can also teleport around the area as it pleases, so you better be ready for it! 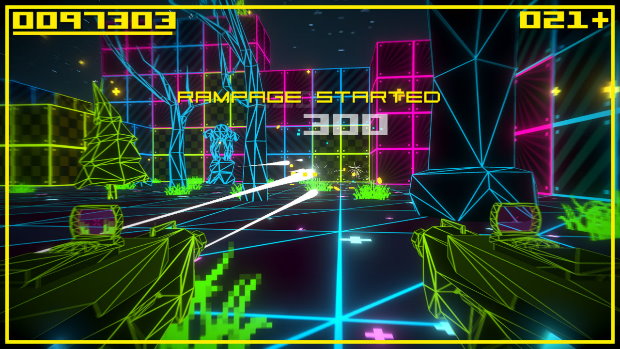 There are two modes for you to play in: Arcade Mode and Challenges. Arcade Mode is then split into Classic Mode, Hardcore Mode, Combo Breaker, Maximum Strength, and Snail Mode. Classic Mode is the regular experience, balanced for players of all skill levels. For Hardcore Mode, there are more enemies to kill, and they also have more hit points. Combo Breaker is tricky, since you’ll start with a maxed out multiplayer, and must go for as many kills as possible within a short window of opportunity in order to keep the combo going, because if it hits zero, it’s game over.


For Maximum Strenght Mode, you are going to take on many enemies as you make the most of the most powerful weapon in the game: the rocket launcher! That’s right, you’re certainly going to make enemies go boom, but since the rocket launcher is also slower, you have to make every shot count. The last extra mode inside of Arcade Mode is Snail Mode, a special experience in which you are overall slower, and you also can’t jump. Being slow is bad, but not being able to jump is even worse! 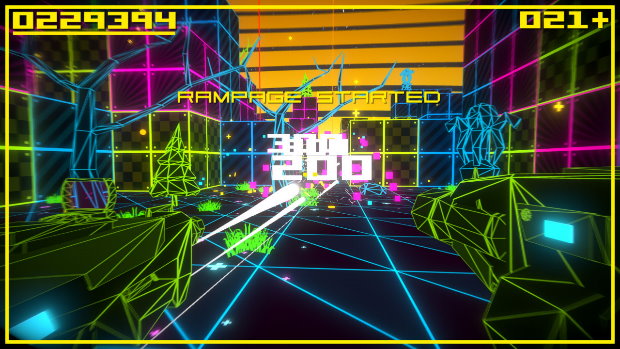 
And now for what trophy hunters have been waiting for… the trophy list! As is the case for other release from Ratalaika Games, Super Destronaut: Land Wars has a full trophy list with a Platinum trophy to unlock. Depending on your skill level, you could add that new Platinum trophy for your collection in less than an hour. As for the things you need to do to actually get all of the trophies, some of the objectives include things such as completing one, three, six, nine, twelve, and fifteen of the thirty challenges the game has to offer, reaching 300,000 points in Classic Mode, 30,000 points in the Hardcore and Snail Modes, 100,000 points in the Combo Breaker Mode, and 125,000 points for the Maximum Strength Mode. 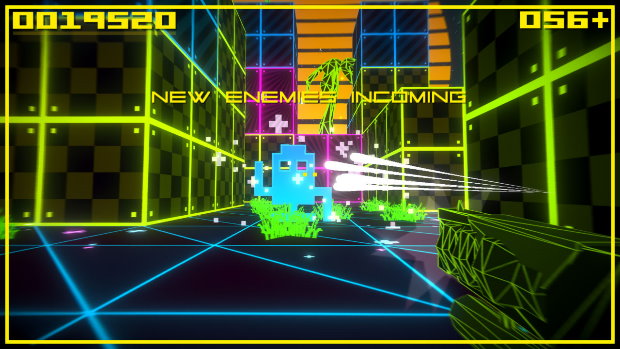 Super Destronaut: Land Wars is a fun neon-infused first-person shooter arcade shooter that, due to its nature, is best played in short burst between other larger games. This Cross-Buy game runs great on PlayStation 4 and, as expected, features a dialed back presentation on PlayStation Vita, with a lower framerate and removed particle effects and other bells and whistles, but it’s still a fun experience on the go. Super Destronaut: Land Wars is out now for $4.99.

Disclaimer
This Super Destronaut: Land Wars review is based on a Nintendo Switch copy provided by Ratalaika Games.

HyperParasite Out Next Week On PS4 And Nintendo Switch