Knightin´+ is a pixeltastic dungeon crawler with a bit of an old-school The Legend of Zelda vibe. Learn more in our on Knightin’+ review!


Sir Lootalot, as his name suggests, is a knight that certainly loves loot. Because of this, he goes out on many an adventure, searching for as much loot as he can carry, taking on dungeon after dungeon after dungeon. For Knightin’+, Sir Lootalot will take you along for one adventure in particular that will see him explore and loot four small dungeons. These four dungeons should take you a couple of hours and change to explore, but that doesn’t mean it’s not a fun adventure! 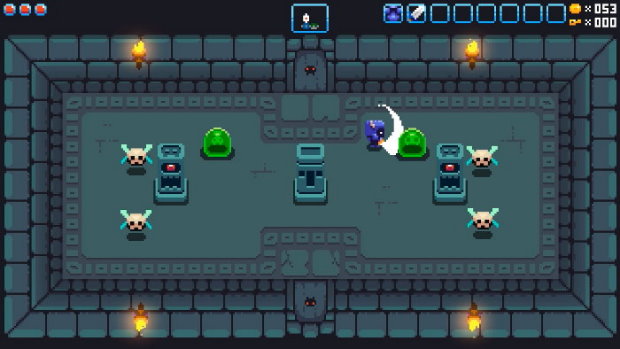 The first dungeon in Knightin’+ will serve as a tutorial, showing you the basics for the game. You’ll see Sir Lootalot from a top-down perspective, and will move him around with the left analog stick or the D-Pad. The X button is used for interacting with things, such as the treasure chests that you will find. Once you collect a sword, you’ll get to swing it around with the Square button. There are more items for you to find in this one, as is the case for a shield you can bring up with the L1 or L2 buttons to protect yourself, or a magic wand you can use to shoot at your enemies, but I won’t spoil all of them here! You can also go into the options menu and completely remap the controls if you feel like it so that you can play the game just like you want to.


There will be a small minimap at the top of the screen, letting you know what rooms you’ve explored for each floor of the dungeons you’ll visit. As happens in games from Nintendo’s beloved The Legend of Zelda series, some of the rooms you enter will have doors that will be locked until you defeat all of the enemies on the screen. There will also be keys to find, which will be of the golden variety, and it is because of this that they will be used to open golden locks. Your progress will be saved by walking over the glowing symbols you’ll find on the floor of some of the rooms in the dungeons. The game will also automatically save your progress once you change floors in a dungeon. 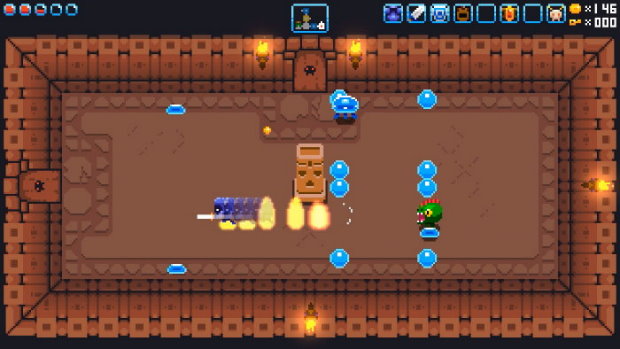 The enemies you face will come in all shapes, colors, and sizes. There are skulls with wings, tall mushrooms, deadly green gelatinous entities, or large horned red-headed demons – that look a bit like Mike Wazowski from Monsters Inc., sans arms. Some of the enemies will have specific movement patterns, as is the case for the skulls with wings which will fly around the screen on a diagonal pattern, bouncing off walls and any structure on the room, while other entities will be a bit more aggressive and will come straight at you trying to deal some damage.

Defeating enemies will reward you with small and large gold coins, as well as with energy spheres that will replenish your health points. Some treasure chests will also shower you with gold coins every now and then. All of these coins can be out to good use by bringing them to a merchant to purchase items that will aid you on your quest. These include energy spheres to recover your health, gold keys that will help you open doors, as well as a special amulet that will make you invincible for a short period of time after you’re hit. 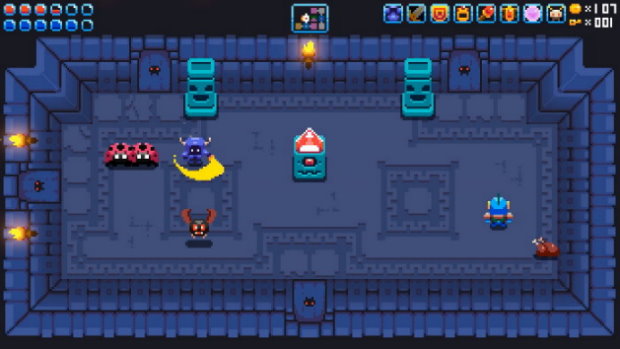 And speaking of health, instead of finding the classic large hearts you’d expect to see in a game in The Legend of Zelda series to increase your health bar, for Knightin’+ you will need to locate large potions with a red liquid inside, which will instantly heal your wound while also boosting your overall health with one extra circle of energy. There’s also the option of saving a lot of coins to purchase one of these magical potions from the merchant, but you better be ready to spend hundreds of coins on it.


And along with the enemies you’ll need to avoid and defeat, there are also traps and hazards you’ll have to keep your eye out for! There are spikes that come out of holes on the ground – which are an easy way of telling where these spikes are going you jump out – massive bear traps that will close with great speed, crushing you and dealing a whole point of damage, or statues that will pop out of the ground and shoot out energy beams that will damage you. 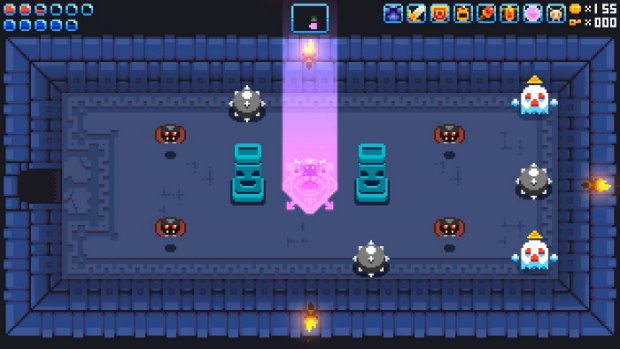 At the end of each of the bite-sized dungeons in Knightin’+, you’ll find a boss that you’ll have to defeat. Odds are you might end up dying the first time you battle a boss since you’ll be paying attention to its movement and attack pattern to find the right time to attack it so that you can slowly but surely deal some damage as you chip away at its health. Survive the battle, and you will find a big piece of treasure that will be added to your loot! For example, the treasure for defeating the first boss will be a big crown made of solid gold.

As for the trophies, Knightin’+ features a Platinum trophy, and since the PlayStation 4 and the PlayStation Vita versions feature separate lists, that means you can add two new Platinum trophies in a few hours! The trophies for this one will be awarded as you obtain the different items that will aid you on your journey, as well as when you collect all of the gold keys and open all treasure chests in the first two dungeons of the game. Another trophy will be awarded for collecting a big red potion, and the final two trophies in the list are for defeating the bosses at the end of the first two levels. 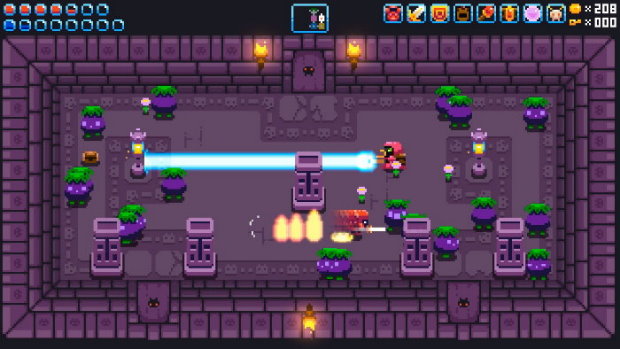 Knightin’+ is a fun, bite-sized take on the old-school dungeon crawling formula of The Legend of Zelda series. It does not offer an overworld for you to explore, so you’ll only have to focus on going from room to room in each of the handful of dungeons that the game has to offer. Knightin’+ is out now for PlayStation 4 and PlayStation Vita as a cross-buy release, for only $5.99.

Disclaimer
This Knightin’+ review is based on a PlayStation 4 copy provided by Ratalaika Games.

Wunderling Out Today On Nintendo Switch