Valfaris from Steel Mantis and Big Sugar is a metal AF 2D sci-fi fast-paced action game you have to play on Nintendo Switch. Find out why in our Valfaris review! 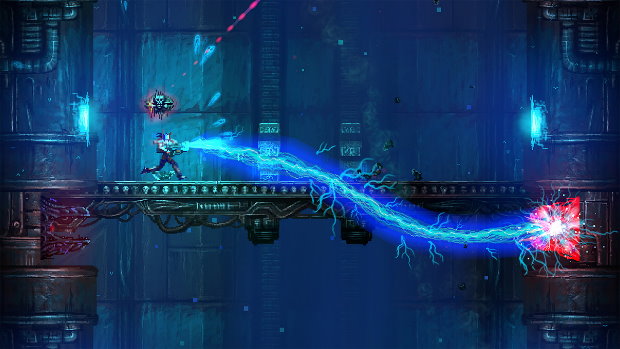 Valfaris is the latest game from Steel Mantis, the studio who gave us the excellent Slain on PlayStation 4 – and now also out on Nintendo Switch. As you can tell from my review, and from EripmaV’s review, Slain is a “love it or hate it” type of game, and I do believe that Valfaris is going to elicit the reaction from gamers due to its gameplay mechanics and the overall difficulty. If you love Slain and its dark metal fantasy setting, then you’re going to get a kick out of Valfaris, which takes that aesthetic and brings it into space, with guns and all. 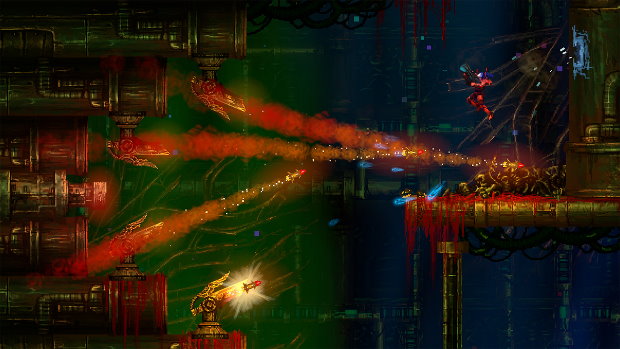 Still with me after that? Great! After vanishing from all galactic charts, the titular Valfaris has once again appeared in the orbit of a dying sun. The citadel has certainly seen better days, and gone is the glorious former paradise. Darkness has taken over, bringing with it death and destruction. You will take control of Therion, a proud son of Valfaris, who is now finally heading home. His journey will have him try and find out what has happened so that he can defeat the evil behind it all once and for all.


You will move Therion around with the left analog stick or the D-Pad, jumping with the B button for the platforming side of things. You can fire your pistol with the Y button, as well as unleash a melee attack with the X button if an enemy gets too close for comfort. You can fire your destroyer with the A button, dealing considerable damage along its path – as long as you have enough energy left for it! You can also bring up a shield with the ZL button to protect yourself, as well as to absorb enemy fire if pressed at the right time to parry attacks, deflecting them back to your opponents. The issue is that the energy bar that powers your destroyer weapon is the same one that powers your shield, so you need to keep this in mind at all times! 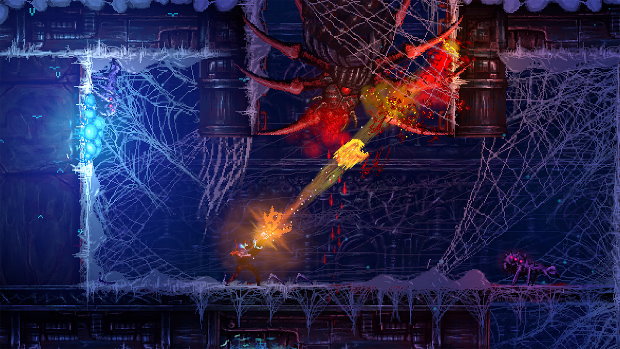 After the initial cutscene, you will approach Valfaris on your spaceship, ready for action. Once you land in nice and hard, killing some enemies along the way, you will be ready for action. The first stage in the game will act as a short tutorial so that you can learn all the basics as you try to stay alive. You will learn about checkpoints, and how you’ll need to insert a resurrection idol into a checkpoint to be able to activate it. Every idol you collect will increase your health and energy bars, but you will lose this boost when you use the idol to activate a checkpoint. There’s also a handy bit of information during this tutorial since you can learn that pressing and holding down the ZL button – which brings up your shield – will allow you to aim your pistol in all eight directions around you while you remain stationary. 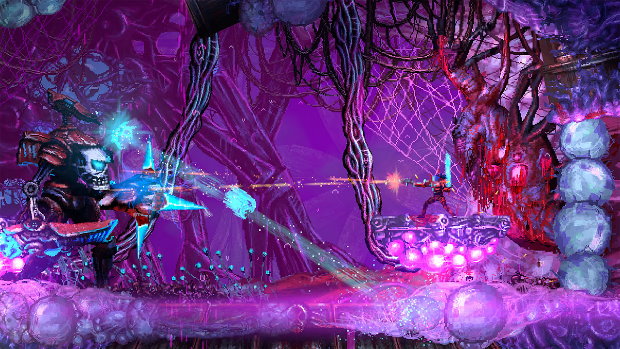 Making good use of your weapons is a must if you want to stay alive. You’ll need to decide if you should keep enemies at a safe distance by using your pistol or destroyer makes more sense than diving in for a melee kill. When going up against a single enemy, this won’t be much of an issue, but if you’re fighting against a group, you will usually be required to use your shield to absorb and reflect an enemy’s shot while also shooting at a rather large cyberwolf running to you from the left side of the screen, all while you jump to avoid the shots fired by a nearby turret. 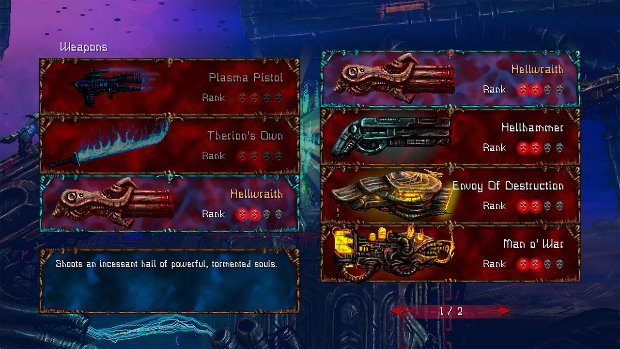 As you explore each area, you should be on the lookout for any pieces of blood metal you can get your hands on. These are very valuable because they can be used at the checkpoints you activate with a resurrection idol so that you can upgrade your weapons. You could, for example, upgrade your plasma pistol so that it can have additional spread shots, or you could boost your blade so that it has an increased attack range, as well as improved overall power. More power equals more damage, and more damage can make a huge difference when going up against the bosses of Valfaris. Since you can also find new weapons as you progress through the game, you need to

On that note, let’s talk a bit about the bosses in the game. You’ll run into a nice variety of bosses, each with its own movement and attack patterns for you to learn about. Odds are you’re going to die the first time you fight a boss, because they will pack a punch and will certainly have an ace up their sleeve that you might not see coming. Take, for example, the first boss in the game, an ugly creature that calls upon on the metal trash around it to create a rotating shield to protect it. I used my destroyer to drain its health and used up all of my energy. And then when I thought I had him backed into a corner, he escaped from my attacks, moved to the center of the screen, and called upon two large metal pillars that quickly moved towards the center of the screen… crushing me before I could kill the monster.

Valfaris has now received an upgrade on Nintendo Switch, which adds a Full Metal Mode into the equation. What does Full Metal Mode do? Think of it as a New Game+ mode in which once you’ve completed the main campaign, you’ll be presented with the opportunity of bringing all of your weapon and upgrades from your “clear save” into Full Metal Mode, as you take on a deadlier challenge. You’re going to need them because, in Full Metal Mode, you’ll be up against enemies that have more health, deal more damage, and are a bit more aggressive… and the same is true for the bosses! The good news is that you’ll also gain access to more powerful weapons, so if you manage to survive for long enough, you might get a chance to even the odds. 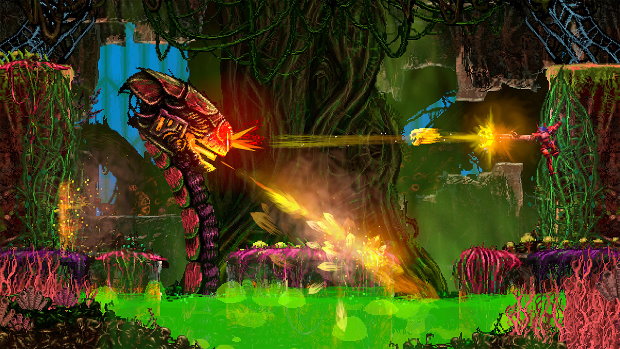 Valfaris was a blast to review on Nintendo Switch thanks to its fun gameplay mechanics, excellent metal soundtrack, and gorgeous pixel art. The game has more than enough content to justify its $24.99 asking price, even more so when you add the aforementioned Full Metal Mode into the equation. Do you have what it takes to survive in Valfaris?

Disclaimer
This Valfaris review is based on a Nintendo Switch copy provided by Big Sugar Games.