[Beyond PlayStation] Gigantosaurus: The Game Review


Since the target demographic for Gigantosaurus: The Game is kids that are 4-8 years old, this one offers a Regular Mode, which offers the standard experience for kids of all ages, as well as an Easy Mode, which offers more help as kids play, as well as offer more hints. The good news is that if you start to play with your kids in Regular Mode and they find it a bit too taxing, you can immediately go into the Options Menu and change to Easy Mode. The same applies the other way around in case your kid(s) find Easy Mode, well, too easy! 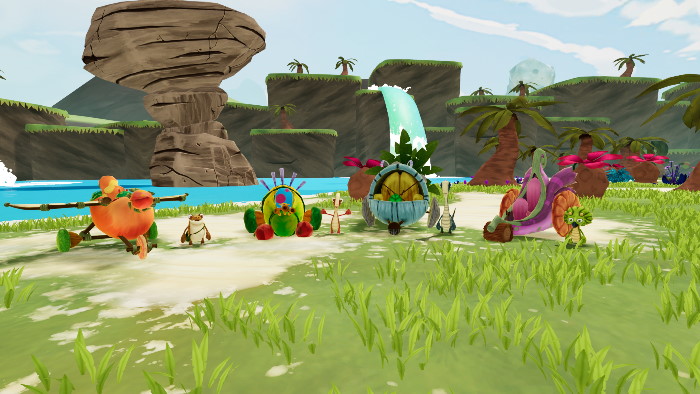 Your adventure begins when Cror and Totor, a pair of sneaky velociraptors, steal a baby egg. Rocky, Tiny, Bill, and Mazu are playing with a ball when Mazu ends up crashing into Cror, switching the ball with the egg the two velociraptors had stolen. Totor ain’t having none of that, and takes back the egg before the pair run and escape. Mazu notices that Cror and Totor have left behind their footprints as they run away from the group, and it’s thanks to this that the gang will be able to go after them to save the egg.


After this, you’ll be given control of Mazu as Player 1, but more players can join in to control Rocky, Tiny, and Bill since the game supports four-player local multiplayer. If playing solo, you can switch between all four dinosaurs by pressing the R button, which will encompass your current dinosaur inside of a bubble, to then bring another dinosaur into the scene. You can move around with the left analog stick, jumping with the B button. Once you run and follow the velociraptors’ trail, you’ll manage to find the egg, recovering it thanks to the help of Gigantosaurus. If that was all the game had to offer, it would make this one a very short adventure… but soon after, a meteorite falls from the sky, blocking the volcano! 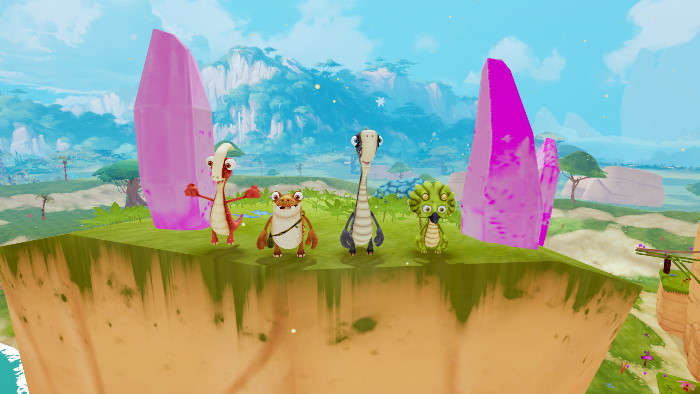 This sends pieces of the meteorite flying out from the volcano, with a large piece falling to the ground. One of the pieces almost hits Hegan, the pterodactyl who was helping to bring the egg back to its nest, and it makes him drop the egg! It’s up to the group of dinosaurs to find a way to reach the egg so that they can save it before someone else ends up stealing it! You’ll then learn you can use the Y button to attack with your tail, which all dinos can do. On top of this, each of the four dinos has unique abilities that will aid the group on their adventure!

By pressing the A button, you’ll activate this special skill. For example, Tiny will rush forward and use its head to bash things – which could be useful to, say, knock down a piece of wood that can then be used as a bridge. Mazu is handy with tools, and that means she can fix things! And then there’s Rocky, who can use its strong arms to climb up vines to reach new areas. 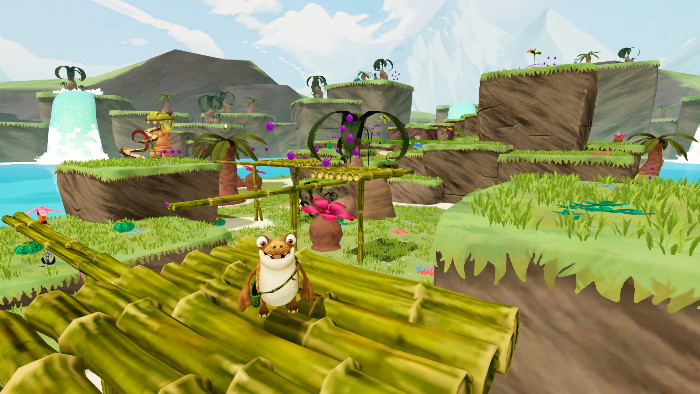 You’ll soon find out that the meteorite that fell onto the volcano is causing tremors through the land, and this has caused other eggs to move away from their nests! You can use your map by pressing the – button, which will allow you to see where the other eggs in the area are located. Once you grab one, bring it back to its nest to keep it safe, so that you can go and search for another one! If you’re hit, your character will lose some of its health, represented by the hearts under its portrait. To help it recover, you can pick up some hearts to heal its wounds.

As you play, you’ll be collecting plenty of seeds that are just floating around on the many areas you’ll get to explore. Different colored seeds are worth different amounts, with purple ones being the most common seeds which are worth a single unit. Seeds can be used to plant Walnut trees in the Savanna at the different locations marked with an X on your map. There are plenty of trees to plant, so if you want to do everything there is to do in Gigantosaurus: The Game, you’ll have to collect hundreds of seeds! 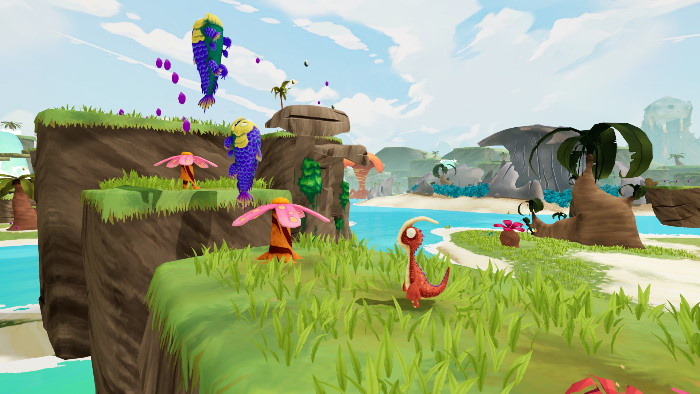 To change between areas, you will use a vehicle to take part in a short race. The vehicle can be moved left and right with the left analog stick, spending up by pressing the B button or going in reverse by pressing the Y button. If you need to jump, you can do so with the L button. And if at any time you need to quickly get back on the track, if you fall out of a cliff or are going int the wrong direction, you can do this by pressing the X button.


Gigantosaurus: The Game is a fun 3D platformer collect-a-thon with some racing segments thrown in for good measure. It does a good job of providing a great experience for its target demographic of kids 4-8 years of age, with lots of things to collect and extras to unlock. If your kids are fans of the Gigantosaurus books or the CGI animated show, then they’re going to love this one on the Nintendo Switch. Gigantosaurus: The Game is out now on Nintendo Switch for $39.99.

Disclaimer
This Gigantosaurus: The Game review is based on a Nintendo Switch copy provided by Outright Games.