[Beyond PlayStation] Children of Zodiarcs Review


Cardboard Utopia took Children of Zodiarcs to Kickstarter many moons ago, back in 2016. The project managed to go past its main funding goal, securing over CA $259,500 thanks to the support of more than 6,600 backers. The team mentioned back during their Kickstarter campaign that the game was to be inspired by games such as Final Fantasy Tactics, Shining Force, Tactics Ogre, and after playing it on the Nintendo Switch for this review, I can definitely see how the team took inspiration from these and other games while managing to make Children of Zodiarcs stand on its own. 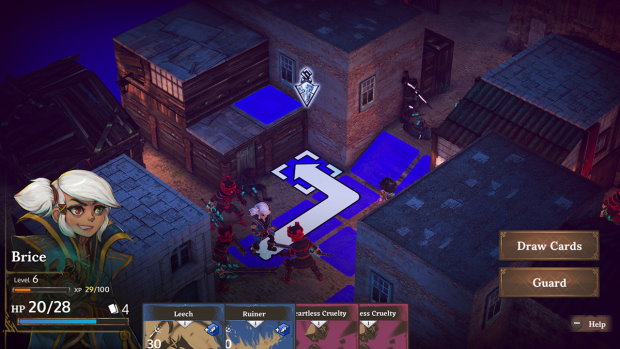 As you can probably imagine, the Nintendo Switch was not one of the platforms considered for Children of Zodiarcs’ release back when the Kickstarter campaign was live, which makes sense since Nintendo’s hybrid console was not part of the gaming horizon more than four years ago. A PlayStation 4 version was developed thanks to a Kickstarter stretch goal, and here we are now with a port for a Nintendo Switch with the help of publisher Plug In Digital.


Children of Zodiarcs places you in the shoes of one Nahmi and her group of professional thieves, who are being chased by the city guards after one particular gig takes a turn for the worse. Trying to escape, the group ends up in the slums, forcing them to dive into the city’s underworld to stay alive. They had gone into the private chambers of a wealthy Toran merchant in the Nobles District of the ancient city of Torus, but things did not go as smoothly as they had planned! 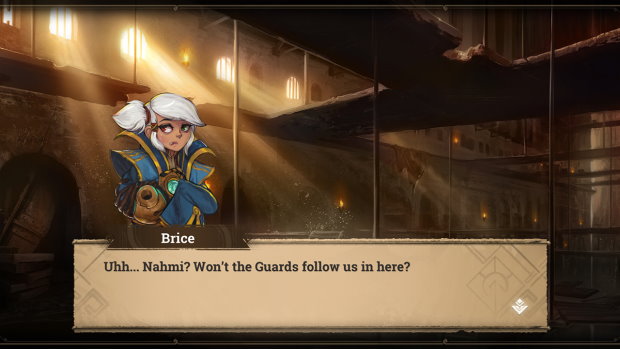 Zodiarcs are technological wonders, sources of limitless energy that could lead to great advances for society. Unfortunately, with great power comes great responsibility, and power can corrupt. Zodiarcs were the gifts of the Heralds, who came to Lumus a thousand years ago from a world that was dying. It all, unfortunately, ended in a great war. But from the ashes of the glorious age, a new society rose like the Phoenix, living in peace. Much of the information from the past was lost, and so were the Zodiarcs. Centuries past and small nuggets of information started to be discovered by civilization, which lead to some learning of the power of the mysterious Zodiarcs.

Before you start your adventure, you’ll have to select between the two difficulty options. For Normal, enemy levels in Story Missions will be adjusted to match the level of our party members if your heroes’ levels are lower than theirs. You’ll face a good challenge, but at least things will be balanced on the fly. For the Hard difficulty setting, the enemies in Story Missions will level up as you, matching your heroes’ levels, which means you’ll need to plan every battle and make the most of your cards and dice if you want to survive! 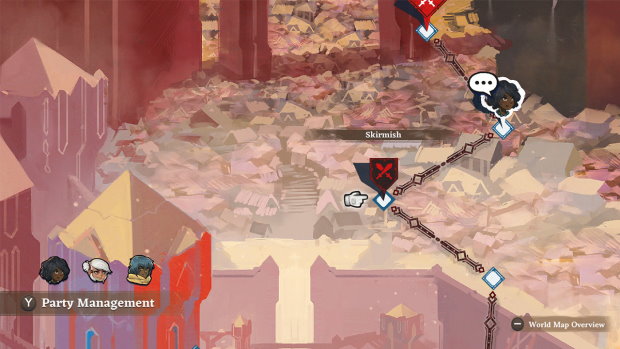 Combat is turn-based, and each of the party members will have combat cards that are linked to their attacks and skills. As you can probably imagine, having cards for your fights does mean that you’ll be drawing new cards during each battle, which will change how you approach each combat. On top of this, you can try your luck with the roll of the dice in order to power up your attacks and abilities, with special modifiers. Luck plays a big part in battles, but you can also play your part and create special dice that can aid you and your playing style. Add a chance to reroll, and you’re going to be working hard to win each fight. 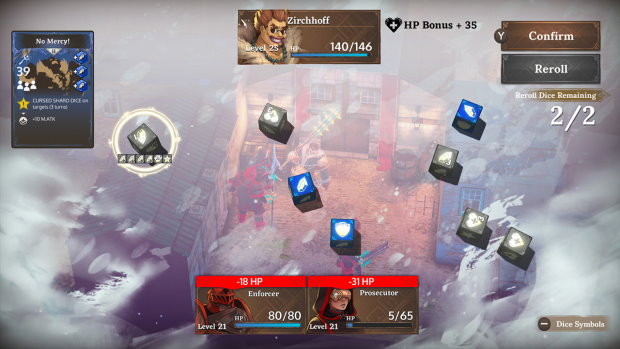 The different dice symbols you’ll see on the dice will have different effects. There are three symbols that will empower the card being played. Shards will increase the strength of attacks and the healing powers of skills by 1. Shields will prevent 1 HP of damage when counter-attacked. Stars will trigger special effects on the cards being played. There are also symbols that will empower the hero that is playing a card. A Heart will regenerate 5 HP of health. A Draw Card symbol will allow the hero to draw one extra card from their deck. A Lighting symbol will give a hero an extra action – and no, they don’t stack. The last set of symbols is for negative symbols, which are bad news. A Cursed Shard will decrease the strength of attacks or healing skills by 1 HP. Cursed Stars will prevent special effects on cards from triggering. Skulls will damage that hero by 5 HP each. And Cursed Cards will make the hero discard one card from its hand.

There’s also the option of changing how each of your party members will perform in battle by customizing their individual decks. By making some changes here and there, you’ll be able to add particular skills into their decks that favor their overall nature and stats, or you could add cards that make them more balanced. You should also guard at the end of your turn if you have no actions to take so that you can reduce the overall damage that character can receive. When you guard, you should also pick a direction for your character, so that you lower the odds of an enemy getting the jump on you, dealing some extra damage by attacking you from behind. Something else to keep in mind while in battle is that you can press and hold down the A button to speed things up, which greatly reduces the overall time you spend in each fight! 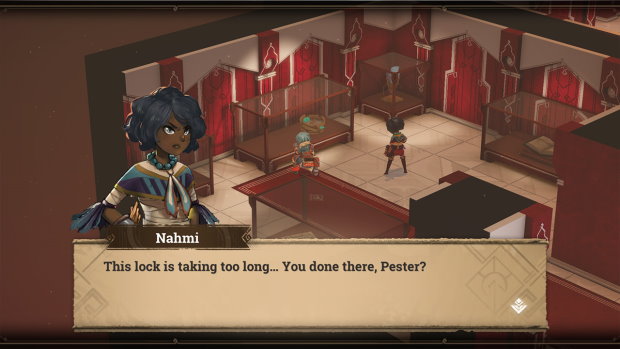 Children of Zodiarcs is a solid strategy RPG with some interesting classic tabletop RPG mechanics mixed with turn-based combat with cards for the skills of your party members. It offers dozens of hours of content for only $17.99. Its solid gameplay mechanics, colorful art style, and many missions to complete, make this an easy one to recommend on Nintendo Switch. I had a lot of fun with Children of Zodiarcs, and I look forward to seeing what Cardboard Utopia does next.

Disclaimer
This Children of Zodiarcs review is based on a Nintendo Switch copy provided by Plug In Digital.