Bubble Bobble is back after a long hiatus. The 1986 classic is back with some modern twists here and there. Pop in and check our Bubble Bobble 4 Friends review!


Playing alone or with up to 3 friends in couch co-op mode, jump your bubble dragons through 100 levels to defeat the wicked magician Bonner and his henchmen.
The popular dragons Bub and Bob are back! Bubble Bobble 4 Friends is the latest game in the legendary Bubble Bobble series from Taito.

Play alone or with up to 3 friends in couch co-op mode and jump your bubble dragons through 100 levels to defy the wicked magician Bonner and his henchmen. The bubbles don’t just let you trap your opponents, either – your dragons can also jump on them to reach higher platforms.
Collect E-X-T-E-N-D bubbles to activate and upgrade skills, such as lightning and bomb bubbles. Develop countless new strategies to travel through the worlds and take advantage of air currents.
The original Bubble Bobble arcade game from 1986 is also included, which captured the hearts of players around the world and still has fans humming its title melody today.

A celebration for fans and fun for the whole family!

Bubble Bobble is back for the first time in a while, with Bubble Bobble 4 Friends. The original 1986 arcade and Nintendo Entertainment System (the version I got to play many years ago) was certainly in need of a resurgence. The premise of the original games was that Bub & Bob had their girlfriends kidnapped by an evil wizard who also turned them into Dinosaurs. From there, you had to complete 100 levels to find them, defeat the wizard, and once again become human.

We’re now getting a new story mode for Bubble Bobble 4 Friends. This game appears in a world where Bubble Bobble already exists – as you can tell from the working arcade machine of the original in the bedroom in which your adventure begins. Whosever’s room it is, they are sleeping at night with plushies of Bub and Bonner – the evil wizard. Something from the sky brings them to life, setting up the battle across 50 stages that will take you from area to area in the room, as you face different enemies and hazards in your quest to find and defeat Bonner. 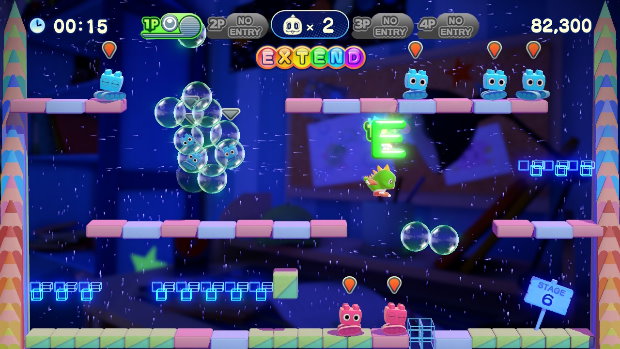 The gameplay takes a lot from the original game, but you can now play with up to four friends locally, which is great since my boys and I had a ton of fun playing together. Bub (which is the first player’s option when playing) shoots bubbles out of its mouth, which can be used to capture the enemies in the levels in the bubbles. At that point, you need to jump and hit them so that they pop – either by hitting them with your spikes or stomping on them so that you can defeat the trapped enemy. If several enemies are trapped in bubbles, then they will go and bounce around the area as you perform a chain combo pop.


For harder to reach areas, you can jump on top of your bubbles and gain some extra height from it. You will typically need to do this every now and then since every set of ten levels will have you collecting the letters E-X-T-E-N-D. When you find each letter, you will get an extra life, but you’ll have to hurry to get them since the letters will disappear if you don’t act quickly enough. When you beat the bosses, you will get extra powers that you can choose before jumping into each set of ten levels, and if you find all of the letters for the word EXTEND, your abilities will be powered up. The first one you get will allow you to shoot bubbles over a longer range, but you will also gain access to electrical bubbles, bomb bubbles, and more. They will come in handy in the later levels, especially once you get into the hard mode! 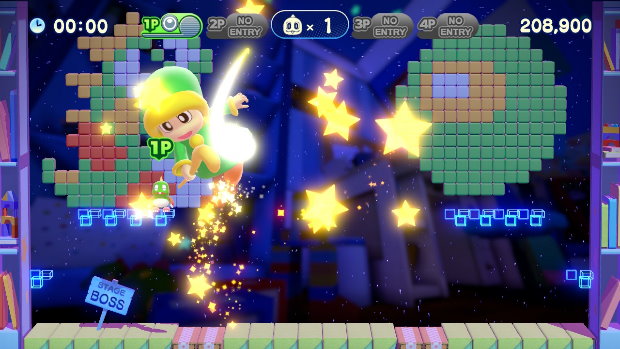 Speaking of the levels, the game has fifty in total, none of which I found too hard, to be honest. It was a fun ride, but an easy journey. The game is designed this way so that players of all skill levels can have a shot at getting to the end of the adventure. But once you finish all 50 stages, you will unlock Hard Mode, which ramps up the difficulty considerably. I found this mode to be more up my alley since it provided me with the challenge I was looking for. Along with the new game, Bubble Bobble 4 Friends on the Nintendo Switch also includes the original 1986 Bubble Bobble arcade game, which has a set of 100 levels that are still as tough as I remember from when I played the game on the NES. (Pro tip: If you want to get the good ending for the original arcade game, you need to play co-op with a second player, since beating the game on your own will get you the bad ending).


Bubble Bobble 4 Friends has a new look, and the art style really helps everything stand out. All the levels are set in the kid’s bedroom, which serves as the backdrop of each stage, and as you move from level to level, you will move from one area of the bedroom to the next one. The overall look for Bubble Bobble 4 Friends is very colorful with a neon-inspired color scheme, with some nice effects that add a bit of extra flair. All of the characters and enemies are nicely designed with a solid 2.5D feel. Sure, I would have loved to see some pixelart for this one, but I really can’t complain about what the team set out to do. 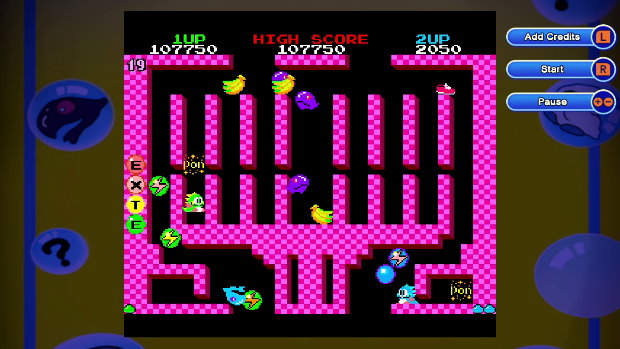 I had a ton of fun playing Bubble Bobble 4 Friends with my boys, as well as on my own in Hard Mode. It’s a good throwback to the older games, and since the gameplay mechanics are of the “if it ain’t broke, don’t fix it” type, this sequel holds up nicely in 2020. Don’t worry about your initial run feeling a bit too easy since it’s there to prepare you for your experience with the Hard Mode you’ll unlock. Add the original arcade version of Bubble Bobble, and you have quite the package on Nintendo Switch that justifies the $39.99 asking price. 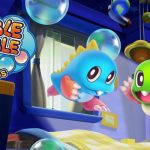 An interesting throwback that, at first, seems a bit short and easy, but a good time in the end.

Disclaimer
This Bubble Bobble 4 Friends review is based on a Switch copy provided by ININ Games.

HyperParasite Out Next Week On PS4 And Nintendo Switch