Patapon 2 is back, and it’s now out as a revamped experience on PlayStation 4. Learn more about this gem in our Patapon 2 Remastered review!


In Patapon 2 Remastered, you will act as the Mighty One, who is tasked with leading the Patapons as they traverse a strange land in a new rhythm-tastic adventure. They have ended up stranded on this new land after their ship is destroyed by a large sea monster, a monster unlike anything they had seen before. You will guide the Patapons with the power of music, as you use the power of the war drums to send them into action. With the beat of the drums, you’ll be able to command the Patapons to move forward, attack, defend, use magic, defend, or, when all else fails, retreat to safety in order to be able to regroup so that you can rethink your strategy. 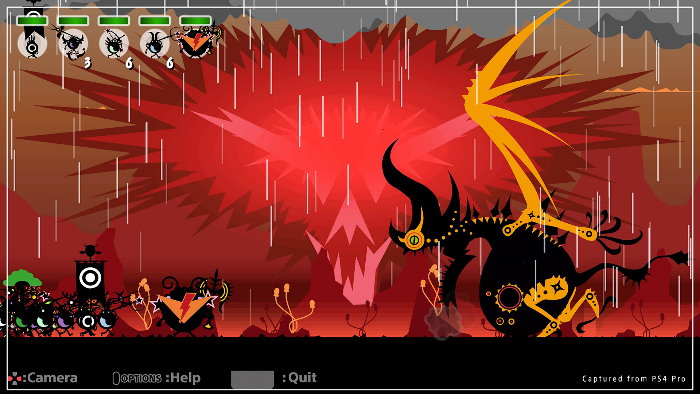 If you have a save file from Patapon Remastered, you’ll be able to transfer it to Patapon 2 Remastered. If you’ve somehow skipped on playing the first – most fun – game on PlayStation 4, there’s also the option for taking on the game in Easy mode to ease you in, so that you can learn more about the overall experience. Since there are no trophies tied to the difficulty setting – more on trophies in a bit – you’re welcome to go with the Easy difficulty for your convenience so that you can get started right away.


It’s after this that the game will kick into the Demo Pon mode, which is the way in which Patapon Remastered 2 presents its tutorial. You will learn about how each of the face buttons will produce a different sound, and how combining them in a specific order will issue a specific command to your units. The Square button will be your Pata, while the Circle button will be your Pon. Want to send the group forward? Then you’re going to have to Pata Pata Pata Pon along to the beat, all within one measure. Hatapon leads the army, marching forward as it carries the flag of the group. It will mark the center of the army, so be sure to pay attention to its position! 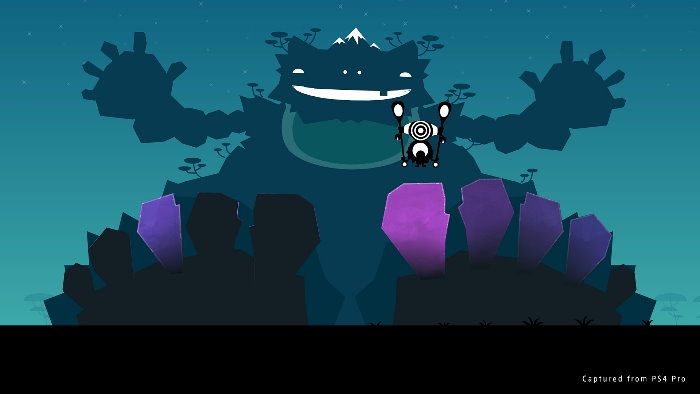 Your first task will be to lead a group to hunt on Tochira Beach so that you can find some meat to feed everyone since the Patapons are very hungry! Once you’ve checked your squad and made sure they’re properly equipped, of you’ll go into your first proper mission. Keep the stats of each one of the units under your command in mind, because their hit point total, damage output, and attack speed are going to be very important for your survival! On top of this, each unit will also have additional stats such as how apt they are at resisting things such as falling asleep, being frozen, or ending up ignited.


To maximize your odds of survival, you should make good use of the Optimize feature you can use at your headquarters before sending out a new group into battle. By pressing the Triangle button when you’ve selected one of the units, you can optimize its equipment so that it changes into the most powerful piece of equipment in your arsenal. For example, your starting units will be equipped with wooden spears, which are good enough to get the job done, but as you face more powerful enemies, your units will need a boost in their overall attack power. Press the Triangle button, and you might find out you had picked up an iron spear. 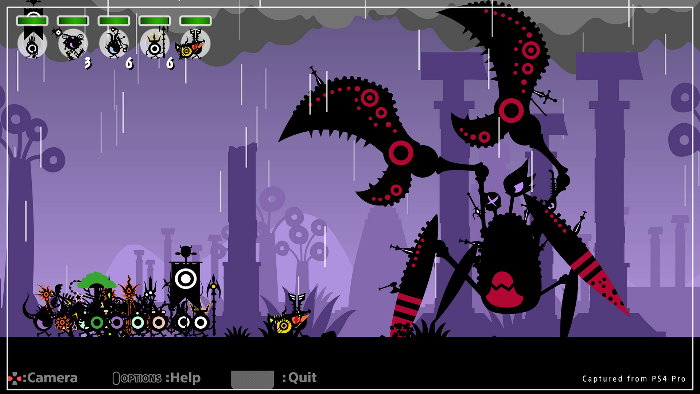 You will learn more and more as you go, making the most of your mistakes. You might, for example, try to attack enemies with your Patapons, only to have them mention that there’s nothing to attack. When this happens, it’s because your units are not within the range needed to attack an opponent. It’s then that you might start to notice that the expressions of the Patapons change when they’re within the proper range. The hit point display in the upper left corner of the screen will also change, as an extra nod.


If you can continue to issue order along with the beat, without missing a single measure, then you can start to build up a combo. You’ll know you have a combo going on thanks to the groovy snake that will show up on the left side of the screen. If you keep the combo going sans any mistakes, you’ll activate a Fever mode. When Fever mode has been activated, your units will become faster and stronger, with a higher attack stat, as well as a boosted defense. 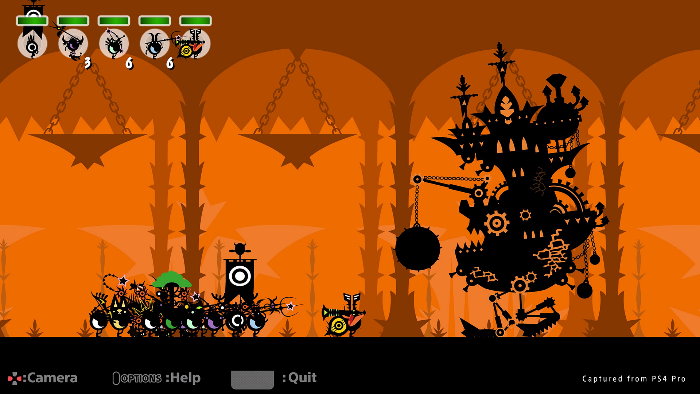 Replaying stages is a good way to gain some extra practice while also obtaining some additional resources for the group. You might think you’ve seen everything a stage has to offer, but when you replay a level, you could end up running into more enemies, or new enemy types you hadn’t seen before. On top of this, you could also face a new level layout, with enemies placed at different spots, or new rewards for your efforts. The weather might also be different, and this can play a role in how your units perform.


Patapon 2 Remastered also has Miracles that can be called upon in battle. You’ll first need to equip a Miracle, but once you do this, you will be able to will it into action as long as you are currently in Fever mode. There are different types of Miracles to use in Patapon 2 Remastered, with a variety of effects. For example, the Rain Miracle can be called upon to reduce the risk of your units being ignited by fire, while also calling upon additional enemies to battle that would not show up if the weather was not as refreshing. You could also call upon the Tailwind Miracle, which will have gusts of wind blowing from the left side of the screen. This will make it so that your ranged attackers can use their weapons over a longer distance, while also affecting how far the long-range attacks from your enemies will travel.

As for the game’s trophies, trophy hunters will be to learn that there’s a Platinum trophy to aim for. Several of the trophies are tied to your progress in the game, making them unmissable, as is the case for the trophies you get for defeating each of the bosses, as well as for beating the game. Along with these, there are trophies for acquiring Divine and Demon weapons, for acquiring some Rarepon, as well as for taking on and beating the third level of each of the minigames in this remaster. 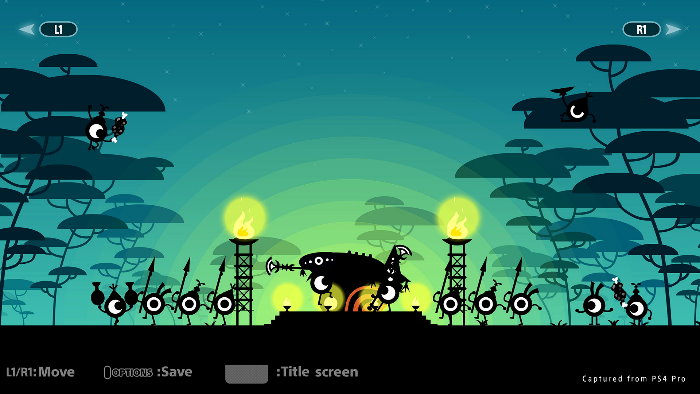 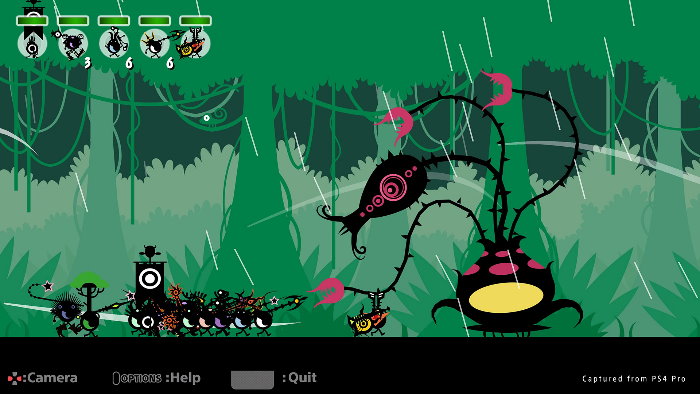 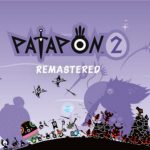 Disclaimer
This Patapon 2 Remastered review is based on a PlayStation 4 copy provided by Sony Interactive Entertainment.