Sega and Platinum games are ready to celebrate with a special bundle of two great action games on PlayStation 4. Check out our Bayonetta and Vanquish 10th Anniversary Bundle review!

Bayonetta and Vanquish are two fast-paced action-focused games from Sega and Platinum Games that have stood the test of time, and now they get a chance to shine on PlayStation 4. And if you play the games on a PlayStation 4, you’ll get to experience their new remastered look in 4K resolution. Bayonetta was made available originally on PlayStation 3, as is the case for Vanquish, but unlike the other game in this bundle, it has had additional shots at reaching new audiences after its initial release. 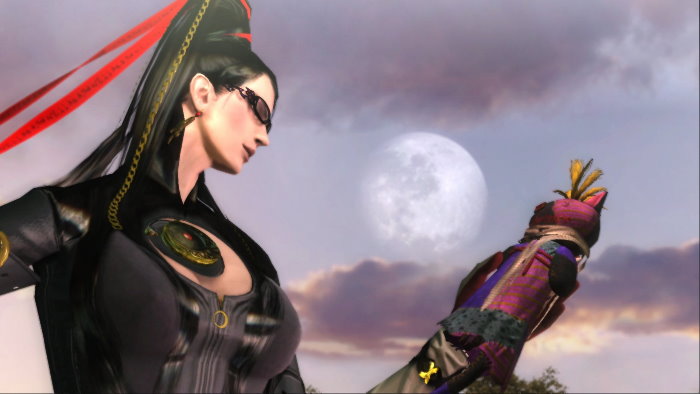 
Let’s start then, by talking about Bayonetta. You will control witch Bayonetta, who can use her magical powers to perform magical attacks with her hair, which will transform into many things as you use it to deal considerable damage. She has awoken after a 500-year long slumber, with no memory of who or where she is. Bayonetta is part of the Umbra Witches, followers of the darkness, who battle against the Lumen Sages who, as the name suggests, are followers of the light. There are many angels to battle as you try to uncover what happened to Bayonetta and what is really going on. While doing its own thing, the game certainly has a Devil May Cry vibe, which makes sense when you consider that Hideki Kamiya was the director for the development of Bayonetta, and he also worked on not only Devil May Cry, but also Viewtiful Joe and the two first Resident Evil games while at Capcom. 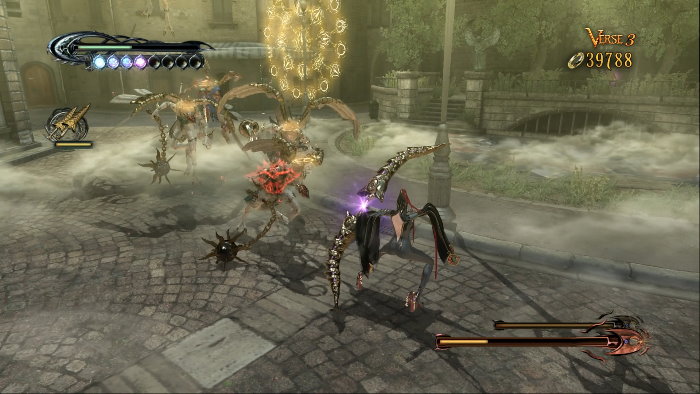 You will control the titular witch with the left analog stick, swinging the camera around with the right one. Items are mapped to the D-Pad. Your main attacks will be your punches and kicks, which are mapped to the Triangle and Circle buttons, respectively. To keep your combos going, you should follow enemies into the air, which can be done with the X button. Bayonetta has a pair of handy guns, which she can use with the Square button, and she even sports guns on her shoes to keep her combos going, so be sure to lock-on by pressing the R1 so that you can focus on specific enemies. Oh, and if you want to get out of the way of attacks, you can do so with the R2 button.

The game will throw you into a short tutorial once you regain control of Bayonetta after a lengthy cutscene on the first chapter. It is here that you will learn more about the combos at your disposal. By combining the Triangle and the Circle button at specific intervals, you will unleash combos that can help keep enemies in check as you make short work of them. Some combos will deal damage around Bayonetta, which is great for when there are several enemies to deal with, while other combos will launch enemies in the air so that you can follow after them. 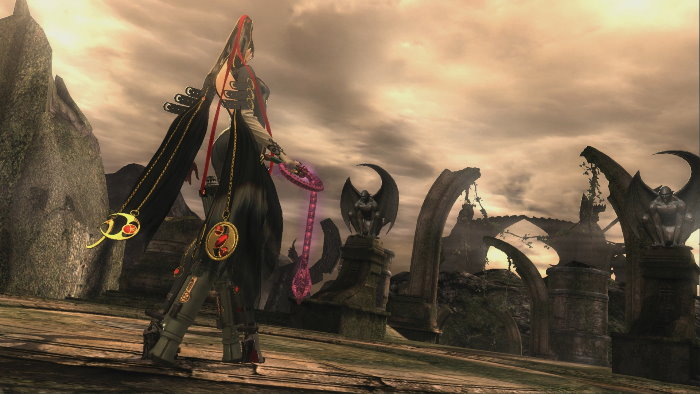 It is here that you will learn that if you dodge an enemy’s attack at the last possible moment before it hits, you will activate Witch Time. While Witch Time is active, enemies will appear to move in slow-motion for a short period of time, during which you can set them up for a world of hurt. Making good use of Witch Time is a must if you want to survive in Bayonetta, because you will always be taking on more than one opponent, and you can’t just attack everyone at the same time… unless you use Bullet Climax! To activate it, fully rotate the left analog stick and then press the Circle or Triangle button. Once activated, use the left analog stick to aim and the Triangle button to shoot around you!

Bayonetta is just as fun as it was back when it launched on the PlayStation 3, with a level of polish that shows all the hard work of Platinum Games. As for the PlayStation 4 version, something I did want to mention is that gone are the long loading times experienced on the PlayStation 3 version of Bayonetta, which, granted, were not a deal-breaker back then, but it’s a much-welcomed quality of life improvement for this current-gen re-release.

And now, let’s talk a bit about Vanquish. Vanquish is a third-person shooter of the “find cover, or you’re going to die quickly” variety. In the near future, the United States is attacked by the Order of the Russian Star, which has staged a coup on the Russian Federation. They have captured a US satellite, and have used it to wreak havoc in San Francisco. The Order of the Russian Star’s leader demands that President Elizabeth Winters surrenders, but she refuses to negotiate with the terrorists. Because of this, you will take control of Sam, a DARPA agent using an Augmented Reaction Suit. Your task is to defeat the Order of the Russian Star within eight hours, to prevent the destruction of New York. 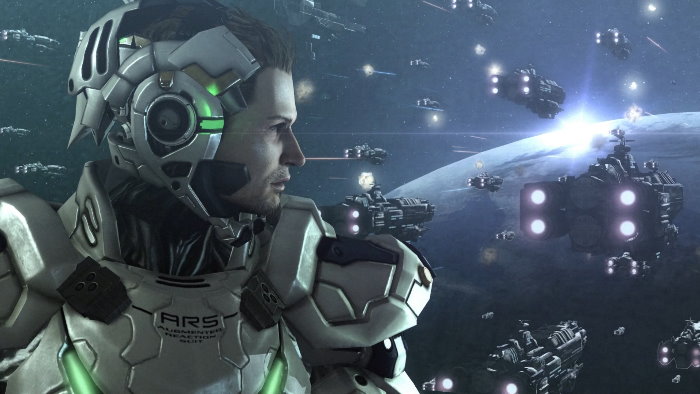 For this futuristic cover shooter, you’ll be moving your character with the left analog stick as you use the right one to move the camera and aim as needed. You have a melee attack mapped to the Circle button, as well as a tactical evade so that you can get out of trouble by pressing the X button. You can take cover with the Square button so that you can plan your next action. Aiming is done with the L2 button so that you can fire with the R2 button. If you need to reload, this is done with the R1 button, which is also used for picking up weapons. The L1 button is for boosting while moving, or for activating a smoke break while taking cover. You can change weapons with the D-Pad by pressing up, right, or down, and pressing left on the D-Pad will allow you to change your grenade type.

There’s also the AR mode, a special mode you can activate by using the X button to evade attacks, to then press the L2 button. This will slow-down time around you, allowing you to focus on enemies as you dish out a ton of bullets to make a dent on their health – or straight-up destroy them if you’re good enough. You need to pay attention to your suit, because using the AR mode too much or for too long will make it overheat. Your boost can also make the suit overheat, and not being to boost – or use the AR mode – could end up being very bad for you. 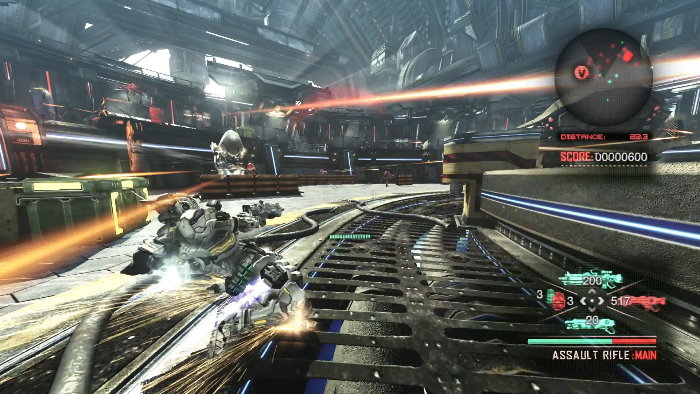 As soon as you start to play Vanquish, the game will present you with a short tutorial to test your optics. After this, you have the option of spending some time going over the basic controls, movement, weapons and tactics, close-quarters combat, as well as the AR mode. You could also decide to just skip all this and jump straight into the action, which is a good option if you’ve already played the game before. But if this is your first time playing Vanquish, then you should definitely complete all of the tutorials, especially if you’re taking on this game in Hard difficulty.

You’ll be facing the robots of the Order of the Russian Star who are great shooters and will always be ready to shoot you in the head if you’re not careful. There will be the regular foot soldiers who are always moving in groups, larger and reinforced robots, four-legged robots that will burst into action to deploy a shield to protect its comrades, very big robots that can one-kill you with its mighty energy attack, and, of course, really huge bosses at the end of each set of missions.

Bosses are a bit tricky since they will always pack a punch, and will target Sam most of the time instead of focusing on the other members of the team. You’ll need to pay attention to bosses to learn more about their movement and attack patterns so that you can exploit their weaknesses to open up their damage spot to make the most of your slow but powerful single-fire weapons – that is, if you’ve picked up any on the way. You’ll probably die at each boss – as well as many times during a mission – but at least you’ll learn from your mistakes! 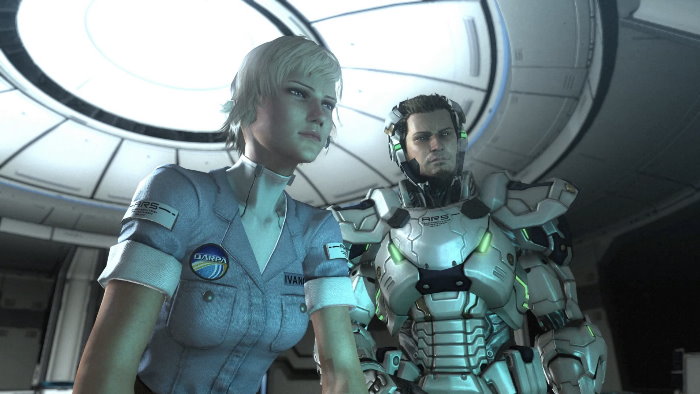 Trophy-wise, since each of the games is based on the versions originally released on the PlayStation 3, each of the games will have a full trophy list, with a Platinum trophy for you to aim for. For the Bayonetta Platinum, you’ll have to complete the game three times, since along with the miscellaneous trophies, you’ll have to finish the game in Normal to unlock the next difficulty setting, to then finish the game in that one so that you can unlock the final difficulty setting… and do it all over again. Out of the two, Vanquish is the harder game to Platinum, but at least you can do it all in a single run by selecting the Hard difficulty setting right from the start. As a heads-up, you need to complete the game in Hard without dying, so do keep that in mind! If you feel like going in blind and playing the game in the highest difficulty setting might be too much, you can always finish it at a lower difficulty so that you can learn more about what you’ll be going up against so that you can then jump into a Hard run.

I had a blast going back to replaying Bayonetta, and I was pleasantly surprised by how fun Vanquish is. Both games certainly don’t feel old and still hold up in 2020 as much as they did ten years ago. You can get Bayonetta and Vanquish in a bundle for $39.99, or you can get the games on their own for $24.99 each. The digital version includes a PlayStation 4 theme to commemorate the anniversary, while the physical version will include a limited edition steelbook with some special artwork to celebrate the 10th anniversary. Either way, you should definitely add this pair to our collection! 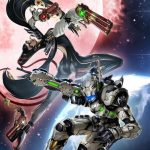 Disclaimer
This Bayonetta and Vanquish 10th Anniversary Bundle review is based on a PlayStation 4 copy provided by Sega.