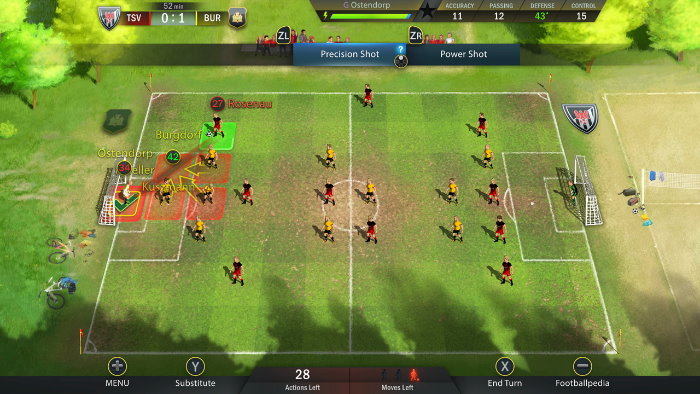 As soon as you start a new save file, you’ll be thrown straight into your first scenario to complete. It’s the National Cup’s finals, with 16 minutes already on the clock. You’re playing as a promising young forward, and everyone, from the fans to the team and even the manager are pretty much expecting you to do what is needed in this scenario: score. This is the way in which Soccer, Tactics & Glory presents to you its tutorial so that you can quickly learn the basics as you play the game.

You will see a yellow cursor on the field, and you will need to use this to select the player with the ball so that you can decide on the next action. Once you highlight the player and press the A button, you will notice that a grid shows up with different green squares that represent where you can move, and to whom you can pass the ball. There’s also the option of shooting at the goal to try and score. Should you decide to take the shot, which is what the tutorial wants you to do, you will get to see the options you have for passing, controlling the ball, or shooting. Should you try and take a precision shot, or go all-in with a power shot? 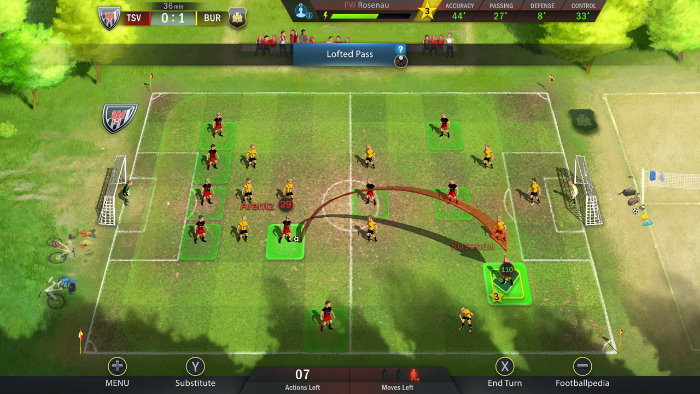 To be able to make the best decision in each scenario, you will need to pay attention to the numbers on top of each of the players that will take part in a play. These numbers will display the potential for each player to perform an action, and since the outcome will be decided randomly by way of a random number generator roll (what is known as RNG) – and it’s here that the RPG elements start to show up. Think of it as the game rolling some virtual dice behind the scenes to decide the outcome of each decision. Shooting at the goal with the player that is currently holding the ball would be a very bad choice since his accuracy is pretty low, so off you’ll go to pass the ball to another player that is in a much better position, and who also happens to have an 80 for its accuracy stat. Can you guess what the outcome of that shot is going to be?


You need to make the right calls during your time with the ball because each team on the field will get to execute three actions during its turn to try and score. Once you’ve used up all of your actions, if you haven’t managed to score, the opposite team will get to have a go at it. During their turns, they will first try to get possession of the ball – on which they can fail depending on each players’ stats so that they can then have a chance to score a goal within their overall three turns. Since three actions per turn are not that much of an opportunity, you can take advantage of special skills which, if performed successfully across an opponent, will add one action for the turn. 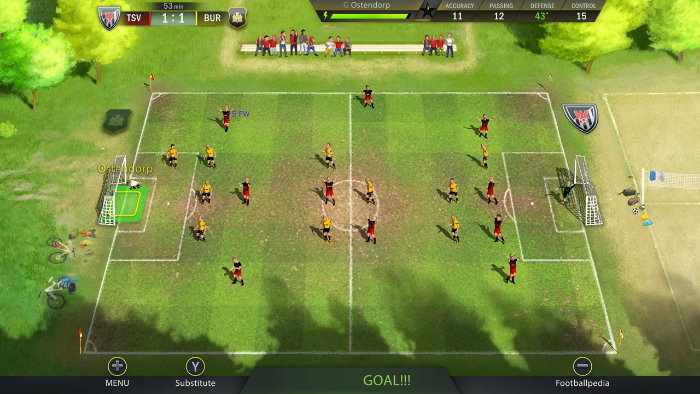 The tutorial will end on a sad note since a badly-timed challenge from an opponent ends up injuring you, big time. Because of this, you unfortunately never manage to recover and are unable to play at the level needed to have a spot in the starting lineup, and after some time, your career is cut short. Fifteen years later, you’re contacted by someone who has a league competing in the Amateur League. He’s in need of a manager, and since you were once a professional player, you’re the right guy for the job: someone who knows the world of professional soccer but is willing to work with amateur players.

After the tutorial, your real journey in soccer will begin. You’ll get to select if you want to go with selecting an existing team, or if you want to start from scratch and build your team – I went with building a team from scratch. The first step will be to select the country in which you’ll be playing, with the options being England, Scotland, Ireland, Germany, France, Italy, Spain, Portugal, Denmark, Belgium, the Faroe Islands, the Netherlands, Sweden, Norway, Finland, Iceland, Greece, Austria, Slovenia, Czech Republic, Slovakia, Croatia, Serbia, Hungary, Romania, Poland, Lithuania, Estonia, Russia, Ukraine, Turkey, the United States, Canada, Mexico, Brazil, Argentina, Chile, Uruguay, Peru, Colombia, Paraguay, Japan, China, South Korea, India, Australia, the Philippines, Indonesia, Vietnam, Thailand, and Singapore. 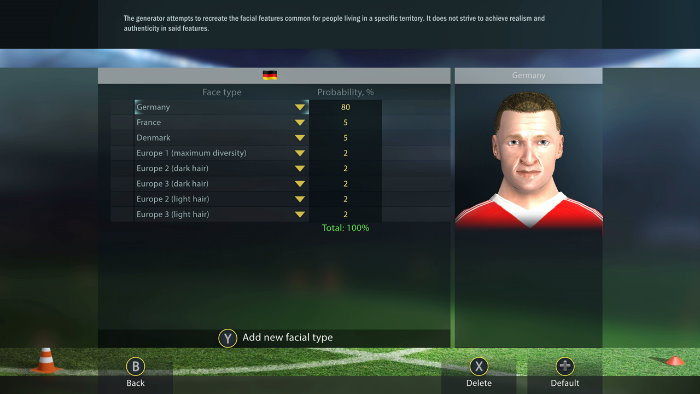 Once you’ve selected a country, you can then pick what that team’s shield will be, picking its main and additional colors, as well as the image that will go inside of the shield. You can also change the design for the different uniforms that your team will use, starting with the home uniform’s design for the jersey, shorts, socks, and boots, as well as the main and additional colors for each one. You also have to decide on the away uniform, as well as on the uniform that your goalkeeper will rock.

When you’ve taken care of this, you will get to decide the lineup for your first match, the position each player will have on the field based on their class – Goalkeeper, Defender, Midfielder, or Forward – as well as check the players you can substitute in if needed. You can also check the age and stats for each player, as well as how long they have left in their contract. Any player with less than a year in their contract can have it extended if you decide he’s a worth element to keep in the team. You can also shop around during the transfer window to try and find some players that can help your team on the field. 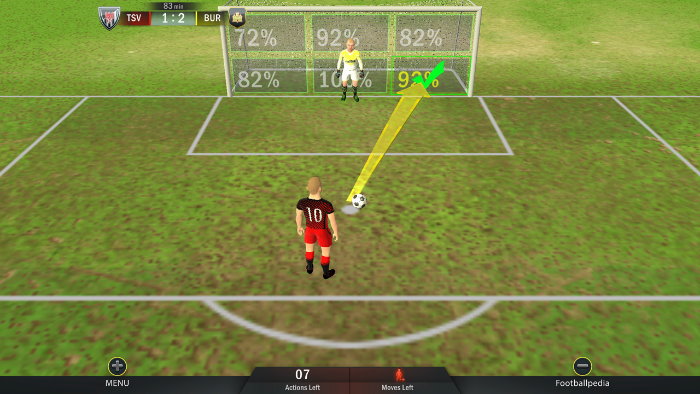 Depending on how each player does on the field, they will obtain experience points that will allow them to level up, improving their overall stats. You can also set for them a training regime so that they focus on improving some of their stats and techniques, and you’ll get to see their overall progress on said specialization after each match. If any of them manage to reach the total needed for improving their skills, you can click on the upgrade button on the right-side column to see which new ability you can unlock.

One of the complaints I have for Soccer, Tactics & Glory is something that happens more and more in video games: the text is too small. This is pretty evident when playing Soccer, Tactics & Glory on Nintendo Switch in Docked mode, but it becomes even more apparent when playing in Portable or Tabletop mode – or if you’re rocking a Nintendo Switch Lite which is portable-only. Hopefully, it’s something that the team can look into and patch, but at least the good news is that on the Nintendo Switch, you can quickly press the Home button twice to zoom in on the action. Since this is a turn-based take on soccer, you can take a short break to zoom in on the text, check what you need, and carry on, but it’s not an ideal scenario. 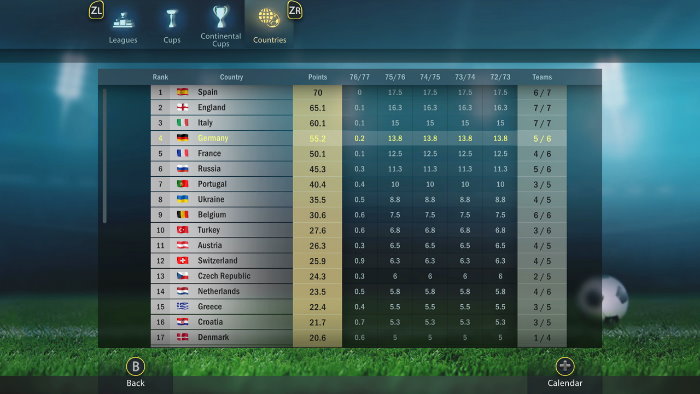 Soccer, Tactics & Glory is out now on the Nintendo Switch digitally and at retail for $39.99. It offers an interesting mix of turn-based action on the field with some of the management elements you’d expect from a sim-style release on soccer, without diving too deeply into micromanagement, finding a balance that works on Nintendo’s console. I found myself playing for hours as I changed the structure of my team – particularly during the trade periods – and even changing their positions on the field depending on what the opposing team was doing, climbing my way up from the lowest tier in the league, gaining fans along the way, signing new promising players I could develop, along with a veteran or two I could have at the ready in case of an injury. While it won’t set the management sim or the soccer video game worlds on fire, I can definitely see myself spending dozens of hours playing this one over the course of the year.

Disclaimer
This Soccer, Tactics & Glory review is based on a Nintendo Switch copy provide by Toplitz Productions.

[PlayStation VR] Doctor Who: The Edge of Time Review