Are you ready for a classic arcade shoot ‘em up on Nintendo Switch? Then check out our SEGA AGES Fantasy Zone review!


I had a lot of fun reviewing SEGA AGES Lightening Force: Quest for the Darkstar, so I was definitely up for taking SEGA AGES Fantasy Zone for a spin on Nintendo Switch. In this classic 2D shoot ‘em up, you can take on the original mode from the arcade game, or change things up a bit by diving into Upa-Upa mode, in which you can use a small fortune of coins to change weapons as you please – as long as, you know, you have the coins for it. There’s also a Time Attack mode in which you can try to speed run Fantasy Zone, which offers a different experience since, while you have infinite lives, every time you lose you will feel the pain in a different way – the clock! 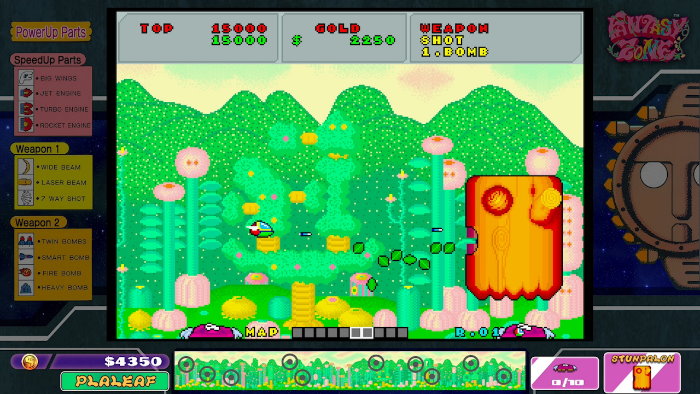 In Fantasy Zone, which originally released in arcades back in 1986, you will be controlling Opa-Opa, who is out on a mission to save the titular Fantasy Zone from an invasion perpetrated by the Menons. And what is their tactic for doing this? Using misappropriated foreign currency to build up their army! Because of this, you’ll be tasked with destroying everything that moves as you try to recover all of those coins so that the Fantasy Zone can once again be at peace. You will travel through a set of eight colorful planets in this arcade release, which should take you around an hour and change per run. 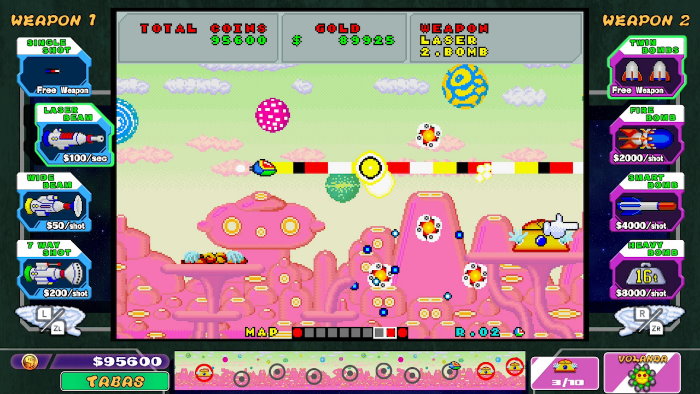 For SEGA AGES Fantasy Zone, you’ll move your ship around with the left analog stick or the D-Pad, flying left or right as you go from one side of the stage to the other and then wrapping back up to where you started, shooting with the Y button, and using the A, L, R, ZL, or ZR buttons for a rapid shot attack. If you find yourself in trouble and need to change things up, you can make good use of your bomb attack with the B button. When playing in the bonus Upa-Upa mode, you can change your shooting weapon type with the L or ZL buttons, and change the bomb type with the R or ZR buttons.

Opa-Opa will start with a twin shot and a single bomb as its default weapons, with more weapons and bombs available as power-ups. The bombs include twin bombs, which launch two bombs at once, a fire bomb that sends out a fire blast when it hits its target, a smart bomb that will damage everything on the screen, and a heavy bomb that will drop a 16-ton weight that will deal a ton of damage. As for weapons, you will get access to a wide beam, a laser beam, or a 7-way shot. You can also add speed-up power-ups that can greatly increase your movement speed. 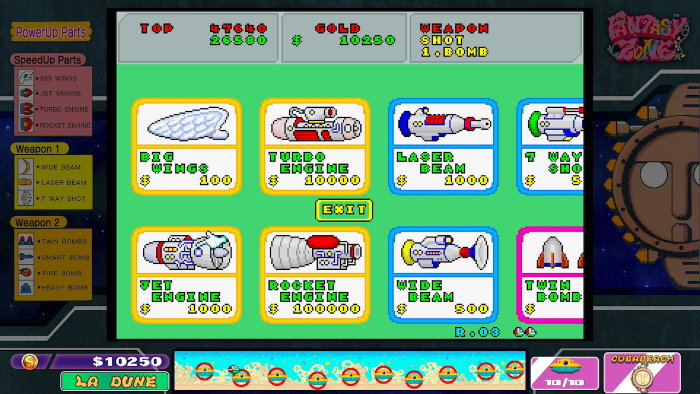 To complete each of the eight planets, you will have to destroy the different bases in each area. You need to be quick about it since if you take too long, you might end up being overwhelmed by the growing enemy forces. Once all bases on a planet have been destroyed, you will get to battle against a huge boss. Each of the bosses will have a different movement and attack pattern, so you’ll need to pay attention as you try to find and hit its weak point. 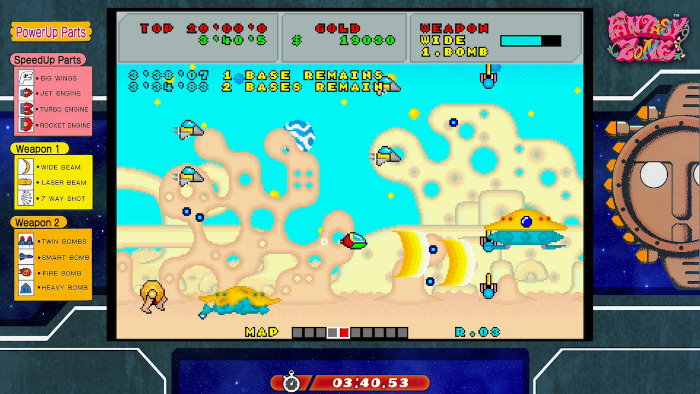 If you want to tailor your experience, you can select between different difficulty options from Easy to Hard. You can also set the number of lives you start with, with the lowest being one life and the highest being five. There are also two versions of the game available, labeled as OLD and NEW. The one labeled OLD one is for the Japanese version, and the one labeled NEW is for the US version. The more coins you collect, the bigger your coin stock will be. As you reach certain milestones, you will unlock extra things for you to use in the settings menu. These include having extra bosses show up, extending the weapon time of each power-up, or increasing the coins that enemies drop when they’re defeated. 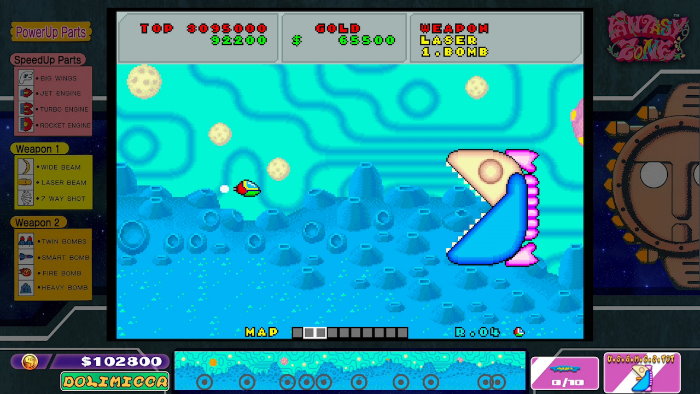 As is usual for the games in the SEGA AGES series on Nintendo Switch, you can make changes to how the action is displayed on the screen. There are normal, fit, full, vintage, or vintage small display modes, scan lines, a smoothing effect, a combination of both, or no display effect, as well as wallpaper options to choose from – although I’d leave the default wallpaper as is since it’s a good one and the other wallpapers that are a repeat from previous entries in the series are a bit bland.

SEGA AGES Fantasy Zone is a solid 2D shoot ‘em up with a very colorful look and fun gameplay mechanics, and on Nintendo Switch, we get a perfect port to play at home or on the go. Shooting at everything that moves on the screen as you try to stay alive has always been a fun gameplay mechanic, and this fun but challenging shoot ‘em up has that in spades. As you collect coins, buy parts and equip them as power-ups for your ship, you will make some progress towards that final planet that will mark the end of your journey. SEGA AGES Fantasy Zone is available now on Nintendo Switch for a low $7.99 asking price, so be sure to add it to your collection!

Disclaimer
This SEGA AGES Fantasy Zone review is based on a Nintendo Switch copy provided by Sega.