The god Eothas awakened from his sleep, erupting from beneath your castle, killing your people and stealing a piece of your soul. Now only you and your companions can uncover the rogue god’s machinations as he tramples over the Deadfire Archipelago.
The award-winning RPG from the masters at Obsidian Entertainment finally arrives, featuring all major updates and expansions.
Bend the world to your will as you explore the depths of infinite possibilities, including detailed character customization, total freedom of exploration, and more meaningful choices at every turn.
Featuring an enormous open world, a massive cast of characters, and a story you can play your way, Pillars of Eternity II: Deadfire Ultimate Edition redefines the role-playing game experience for a new generation.

Pillars of Eternity II: Deadfire launched on PC back in 2018. It’s the sequel to Pillars of Eternity, which released on PC in 2015, arriving in consoles later on. Deadfire has now been packaged for consoles, including all of the expansions and updates that have come out since its original release. It’s packed with content and a ton of hours of enjoyment!


Since it’s the second one in the series, if you have a save file from the original, you can import your character over. If you don’t have one, the game will guide give you through a general path that brings you close to where you were going in the prequel. Were you good, bad, or somewhere in between? If you want to, you can get further into the details and can dive into some more granular choices as well, allowing you to spend a significant amount of time figuring out your choices. Unless you have beaten the game on another platform, I don’t know why you would do that, as it can feel a bit tedious. 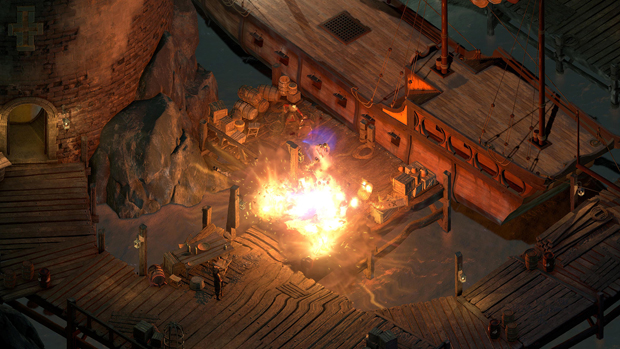 At this point, you can get into character creation, which will give you all the depth you expect in these types of games, allowing you to choose your gender, race, class, allocate character points, so that way you can build your characters just the way you want them. I always tend to make a fighter class with a focus on intelligence, as I always enjoy it when possible, trying to talk my way out of some situations in these types of games, avoiding combat where I can. The options are really open in how you want to shape your character, making the game ripe for multiple playthroughs, as your experience can change quite a bit depending upon your character build.


Now, spoilers for those who haven’t finished the first game yet. SPOILERS AFTER THE IMAGE BELOW. 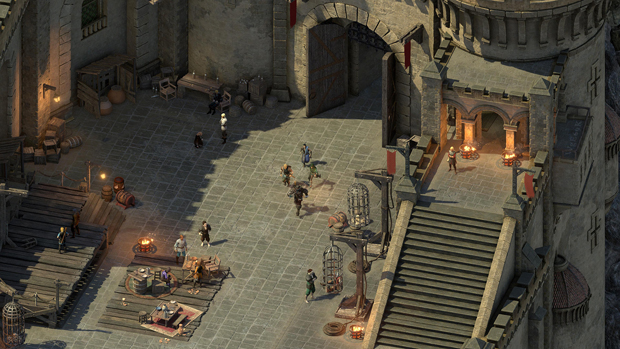 The story sees you at the end of your first adventure, hanging up your sword and taking over a castle. However, a being know as Eothas takes over a giant statue under your castle, killing everyone there… including you. You are awakened by a god and brought back to earth to stop Eothas. Along with being brought back to life, you are now a Watcher and have the ability to see and speak with the dead, helping them in your travels. You now travel the Deadfire Archipelago in search of Eothas on his path of destruction. The story is good, and that’s just the starting point! It’s a very story-focused game, so I don’t want to get into the details or too far in. Needless to say, I had a great time exploring the islands and tracking down Eothas. It’s not just the main story either since the game is littered with small and larger sidequests that will make you want to split your time between your god hunt and helping people.


Since this is a PC title coming to console, one of the main concerns is how the controllers translate from a mouse and keyboard setup to a DualShock 4. I have some good news since, for the most part, the console controls work really well! It feels very similar to the layout from the port of the original game, and everything is good, with the exception of the DualShock 4 touchpad. This particular button is mapped to bring up the tutorial menu, and I would have preferred it being used for something that would be more useful, such as, say, the map. Overall it’s a great setup, and the game ease’s you into the intricacies through some great tutorials.

Combat has evolved in the sequel if you want it to as well. At the beginning of Pillars of Eternity II: Deadfire, you can make a choice to have a semi-realtime battle system featuring a pause button for you to stop and issue commands for your characters. This is the classic battle system form the original, and really what other CRPG’s have been doing for decades. That being said, a new option is a turn-based mode, a much slower, more methodical mode of play. Each player will take there turns, and the duration of casting and the effects of things will change for this version. It’s more akin to something like Divinity Original Sin, which I enjoyed as well. For the purposes of this review, I selected the original mode, as that’s what I was itching to play. 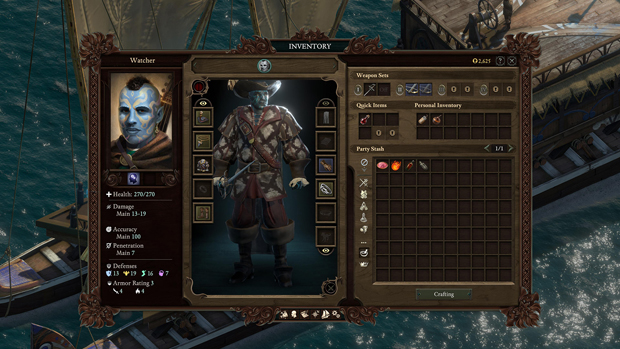 Pillars of Eternity II: Deadfire is a massive undertaking. The Deadfire Archipelago is a large set of islands in water that you need to explore as you search for Eothas. How you get around is y way of your pirate ship, and for that, you obviously need a ship and a crew. You can recruit members for your ship during your journey. Another important thing to take into account is how you take care of your crew in terms of the supplies on the ship, as they will need food and drink. If you cheap out on what you give them, you may face a mutiny. It’s worth paying a bit more and keeping your crew happy, as it will make your life easier. You will also have naval combat, which will feature a pen and paper skill-check system, which you will see in other parts of the game.

As mentioned earlier, the build of your character is really important for the game, as it will shape how you will go about your run and how you approach the massive world before you. You can focus more on stealth or brute force your way through situations. My preferred method of trying to talk my way out of situations. Pillars of Eternity II: Deadfire really does have some high replayability, since you have a ton of ways to do things. You also have four major power brokers in Deadfire, and your relationships with them can affect how your allies look at you as well as the NPC’s reactions to you while exploring. The way all of these systems work within each other really does amaze me, as it gave my playthrough such a great experience. I can’t wait for my buddy to play through the game so I can talk with him about his choices and how the outcomes differed from what I experienced. 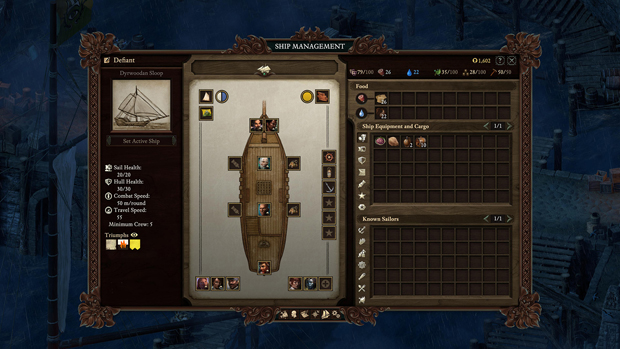 While a didn’t have too many issues with Pillars of Eternity II: Deadfire, one of the hurdles during my playthrough was the obscene amount of loading times. They’re bad. Like, really bad. I started timing them, and they were well over a minute, sometimes hitting over a minute and a half. This happened with me playing on a PlayStation 4 Pro, so I don’t know what the load times are on a regular PS4. I’m hoping they can patch this soon since reducing loading times should definitely be at the top of their list.

Pillars of Eternity II: Deadfire looks great. I was hoping to see a bit of an option for a visual boost when taking on the game on a PlayStation 4 Pro. The world feels really distinct and different, which is great to see on PS4. The music is great, changing as you explore new areas. When on the sea, it fills your ears with a theme suitable for taking on open waters. Villages and the overworld had their own inspiring tracks. I was also impressed with the voicework put into the game like a ton of the lines have spoken dialogue, which I didn’t expect. I’m so used to games of this genre having almost no voicework or the bare minimum for the main story, so I was impressed by what was here. The quality was there as well, with every voice actor bringing their A-game. 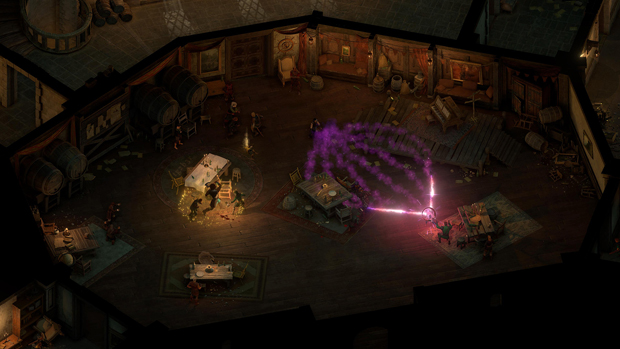 I loved Pillars of Eternity II: Deadfire – Ultimate Edition. It reminded me of Baldur’s Gate so much, and really gave me the feeling of being in front of the computer playing games of that genre. To its credit, moving from a mouse and keyboard setup to the DualShock 4 feels seamless, as if the game was originally designed for consoles. Other than the long loading times, this is one you have to play on PlayStation 4.

Disclaimer
This Pillars of Eternity II: Deadfire – Ultimate Edition review is based on a PlayStation 4 copy provided by VERSUS EVIL, LLC..

[Beyond PlayStation] The Adventures of Elena Temple: Definitive Edition Review

[Beyond PlayStation] Still There Review