Welcome to the latest POWGI release, exploring a different concept surrounding the word search puzzles with mazes. Learn more about it in our Word Maze by POWGI review!

This is a double review for Word Maze by POWGI Review. Ceidz and ThaRaven403 played the game, and this review presents what they both had to say.


Word Maze puzzles are like word searches that can go around corners. Each letter is used exactly once, and you need to trace a continuous path through all the words in order to solve the maze.

Word Maze previously appeared in the Word Puzzles by POWGI compendiums on Nintendo Switch and 3DS family systems. This new version features more than 720 puzzles – including the extra DLC that was made available for Switch.

The word maze concept takes a different approach to traditional word search puzzles, since each time you start a new puzzle, you are given a theme to help you find the different words, and the first word on the grid that starts the maze. As you find words on the grid, you’ll gradually reveal a path on the maze, which means that words can be found in multiple directions, not strictly following a straight line. For example, if you have a six-letters word, you could have it placed on the grid in a way that you go right for two letters, down three, and for the last one, you go back left. Each letter will only be used once, and in the end, you’ll have traced your way through every letter on the grid.


This makes for some challenging gameplay, especially when you don’t know what word you are trying to find! Themes are presented in a way that some words can be a bit far-fetched and thus not the ones you’d think of right away. There are a total of 120 different themes in the game, with each consisting of six puzzles to solve. Grids will also vary in size, ranging from small six by six grids to bigger ones that are ten by ten. 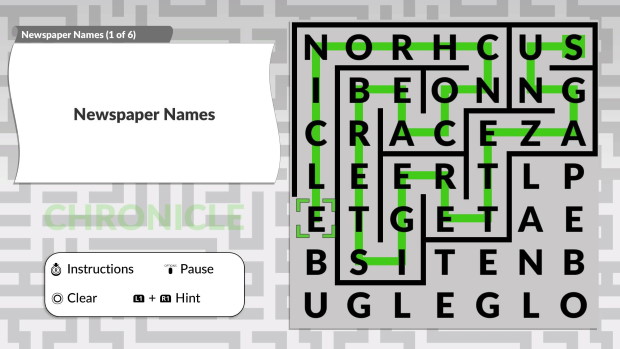 If you’ve played any of the POWGI releases before, you won’t be surprised by the game’s traditional black and white grid, with a white rectangle on the left that will display the words you find. I have to admit I’d like to see a dark mode integrated, as in one of the POWGI previous releases, because it can get a bit hard on the eyes when you’re playing for a while.

I was pleasantly surprised by this concept when I started playing, as it’s an original way of making you twist your brain (almost literally since your words are twisted in the maze!) to figure out what words are present on the screen. Luckily for people who would have difficulty on certain puzzles, there’s a hint system that will reveal the list of words for that particular puzzle, making it just a matter of finding them subsequently after the words you have found so far to complete the level.


The good news is that this hint system won’t void any of the trophies, so you don’t have to be afraid to use it if you get stuck. Even more luckily, if you’re hunting for the traditional double-Platinum trophy (PS4 and Vita), the POWGI titles have to offer, you only have to complete 32 specific themes out of the 120 to get that Platinum trophy in each version. 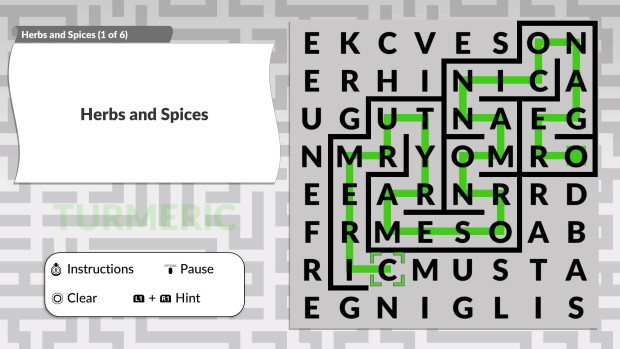 As the game starts, we land directly in the theme selection screen. Like ThaRaven403 mentioned, this time around, there are 120 different themes, each containing six different puzzles, meaning that this game has 720 puzzles, which is indeed a lot of content for a low price!

I was curious as to how the gameplay would play out, given that the core mechanic is finding hidden words in a specific order, in order to “draw” a path through a maze on the grid. I was surprised to see how easy it is in effect since you move the pointer over the letters on the grid in order to form the hidden words until there aren’t any letters left.

Each time a word is found, the maze is progressively drawn around the newly found word, which eventually fills the entire grid. As you find words in each grid, the remaining letters will hopefully help you detect the words left on the hidden list. It was a new twist in the word search genre, which I personally loved! 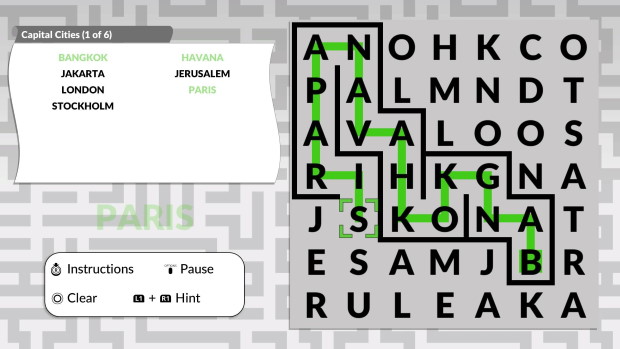 At one point, you’ll most likely be lost and unable to find a word in the grid. Luckily, there’s an in-game help system available by pressing the L1 and R1 buttons at the same time, which helps tremendously and doesn’t affect the trophies, which is actually a great way to show some love to the people playing the game. As each grid is completed, we get the classic POWGI dog and a funny quote, which I’ve become fond of as I’m playing more and more POWGI releases.


As for the presentation, it is as basic as it can get with a white background and the grid overlay, and the different soundtrack themes are reused from previous POWGI games, which wasn’t an issue for me since I liked the new gameplay. Trophies are awarded for completing 32 specific themes out of the 120 different themes available, which will most likely take you two hours to achieve, and given that this title is cross-play, you can get two Platinum trophies for the price of one game!

I really had a lot of fun with Word Maze by POWGI, which makes this game easy to recommend for first-time POWGI players!


Final Thoughts
Word Maze by POWGI is a solid word-based game to play on your PlayStation 4 and PlayStation Vita. It has addictive gameplay, and thanks to this being a Cross-Buy release, you can get two Platinum Trophies in a few hours of gameplay. We loved the new gameplay twist for this word game, and think this is an easy one to recommend for first-timers. Fifty Words by POWGI, another POWGI game we reviewed a few months ago, is also a great (and more colorful) experience.

Disclaimer
This Word Maze by POWGI review is based on PlayStation 4 copies provided by Lightwood Games.