From the co-creator of Rick and Morty comes Trover Saves the Universe. Your dogs have been dognapped by a beaked lunatic who stuffed them into his eye holes and is using their life essence to destroy the universe. You’re partnered with Trover, a little purple eye-hole monster who isn’t a huge fan of working or being put in the position of having to save the universe.

Only you and Trover can save everything in this bizarre comedy adventure filled with combat, platforming, puzzles, and morally questionable choices — created by Justin Roiland!

– Control Trover’s movements, but not his mouth. He’s got a lot to say about what’s going on in the game.

– Travel the cosmos to experience a variety of weird alien planets and characters with big personalities.

– Upgrade Trover AND YOURSELF with new abilities while evading awkward situations.

– Immerse yourself in weirdness, no matter which display you use. Switch between TV or PS VR* whenever you want.


Trover Saves the Universe is the newest game from Squanch Games, who has previously worked on Accounting +, one of my first PlayStation VR purchases. It was one of the funniest games I had played in a long time, and while there was a bit of gameplay in it, it was more of an experience as you moved from one funny scene to the next one, over and over again. Trover Saves the Universe was announced, I was excited to see what the team would do next.

In Trover you are a Chairopian, a being who only sit in a chair. A being known as Glorkon stole your dogs and put them in his eye sockets, as they are magical dogs and that grant him special powers. At first, Trover wants to kill you, since it’s your fault Glorkon has your dogs, but you quickly learn you need to team up to stop Glorkon and save the universe. That is the plot, and it’s spectacular. 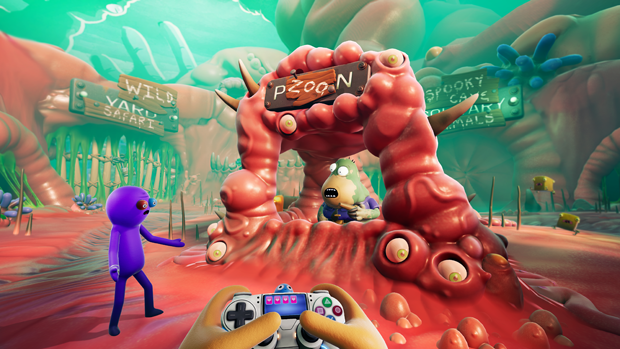 You play with a literal DualShock 4 controller in hand, and Trover is linked to you and the DualShock 4 controller, so you directly control him. When you move the stick, you will move him around the area, swinging a sword and jumping around. It’s a really good setup that builds the unlikely partnership between you and Trover. Along the way, you will receive chair upgrades that allow you to move higher in the air so you can get a better view of what’s going on, as well as have the ability to manipulate objects around you. Trover will also receive upgrades… through Powerbabies… Yes, you read that right, Powerbabies. Trover has two Powerbabies shoved in his eye sockets, but when he gets a new one, he’ll remove one of the Powerbabies, and the new one will eat the old one, transferring all the powers as well. This will add the ability to roll, double jump, glide, and more.

The gameplay feels like a distilled beat-em-up experience from a virtual reality perspective, with Trover moving from area to area, beating up Glorkon clones and other local beasts. There will be blue halos on the ground, and when Trover touches them, it moves you to that spot so you can both carry on. It’s something that feels great on PlayStation VR. 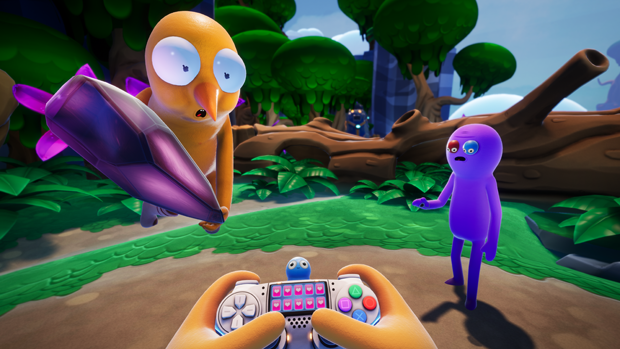 The biggest thing the game has going is its humor. I was regularly laughing out loud thanks to the crazy dialogue of the characters. Everyone was really different with unique personalities, and the dialogue just continued to go on and on with lots of great moments. I don’t know how much voice-over work they recorded, but characters will literally go on for minutes after you complete your goals. Everyone is great, but one of my favorite moments is early on when you meet Glorkon’s brothers, an ancient race of beings he defected from. They were giving me my next goal, and as I was leaving, I heard one of them talk about how he was glad I was leaving so he could remove his pants. Of course, I went back over, and he told me he had removed his pants and was “airing his thing out.” This conversation went on for a few extra minutes, adding nothing to the story itself, but adding more to the characters and the whole universe for the game, making me laugh when he was done. The game is packed with these moments, so be sure to take your time and let conversations play out, since it’s worth it.


Trover moves from world to world with you as the Chairopian getting things to help take down Glorkon. Each of the worlds has its unique look and feel, with one being made out of flesh, one that feels more like a Mario level, a village of peaceful creatures you were supposed to kill because they were deceased, and more. Trover Saves the Universe really does a great job with creating a unique universe, although it never goes full-on crazy like Accounting + did. 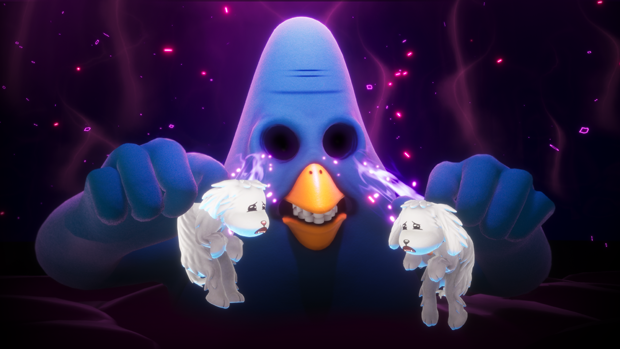 And now, let’s go back to talking a bit about Powerbabies. As I mentioned before, they give Trover upgrades to his abilities. While there are different Powerbabies to collect, there are green Powerbabies hidden throughout each world. There are dozens, and they can be in some weird to see places, so you’ll need to be on the lookout for them. You could also find them hidden inside of star blocks you need to destroy. The more Powerbabies you collect, the more health Trover will have, boosting his overall heart count over its initial five hear limit, not that you take much damage in the first place. Red Powerbabies are also around, and they will make it possible for Trover to heal.

I really loved Trover Saves the Universe and what it brought to the table thanks to its implementation in PlayStation VR. It’s fun, humorous, gross, and laugh out loud funny at certain times. I was really delighted with it, and the gameplay, while not super-advanced, was great for the PlayStation VR setup, and the way they tied you to being in a chair with a controller in hand was a good design choice. I think one of my favorite things was how the relationship between you and the Trover organically grew from being antagonists to becoming friends. Trover has become one of my favorite PlayStation VR games, and it’s one you have to play!

Disclaimer
This Trover Saves the Universe review is based on a PlayStation VR copy provided by Squanch Games, Inc..

Mosaic Out Next Week On Nintendo Switch