EarthNight from Cleaversoft is a procedurally generated runner in which Earth has been invaded by dragons, and it’s your job to get rid of them to recover your home. Learn more in our EarthNight review!


EarthNight is an illustrated procedurally generated platformer that takes place in a dystopian future just after the dragon apocalypse. Sydney and Stanley have had enough! They’ve decided to skydive back down to the planet, taking out as many dragons as they can. Jump and dash your way across the backs of dragons on your way down to Earth in classic 2D side-scrolling action.

Dragons have taken over Earth, and you’ve had enough of living in a spaceship, so you’ve decided to jump towards Earth to get rid of the invaders. As the game begins, you get to select which character you want to play as, between Sydney or Stanley. Each has its own gameplay perks and using one or the other doesn’t affect how the game unfolds because each “run” can be played with either one. This being a roguelite, every time your character dies, you’re back in the beginning space ship. 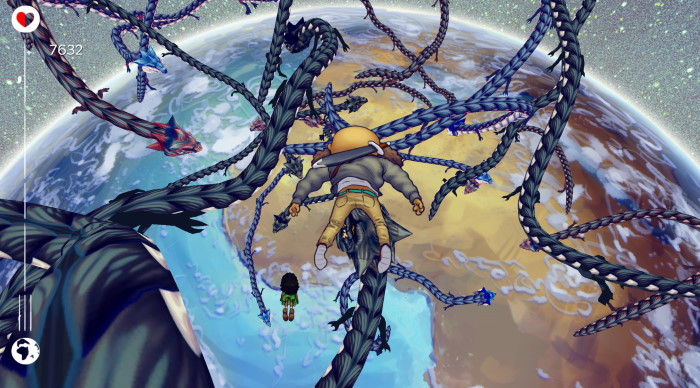 If you’re noticed, I mentioned “run,” because this game is a roguelite endless runner in which you are running on the backs of different dragons as you try to avoid enemies there, hoarding different collectibles. There is no tutorial for EarthNight, so the first 15 minutes or so are quite confusing as you’re trying to get a hold of the different gameplay mechanics. Luckily, there aren’t any consequences to figuring it out, because once you die on the way down, you’re back in your ship, and ready to run for the next time. If you manage to destroy a new dragon species on your way down, you’ll also obtain permanent perks on subsequent runs, things such as double jump boots, or swords that are better at defeating some enemy types. 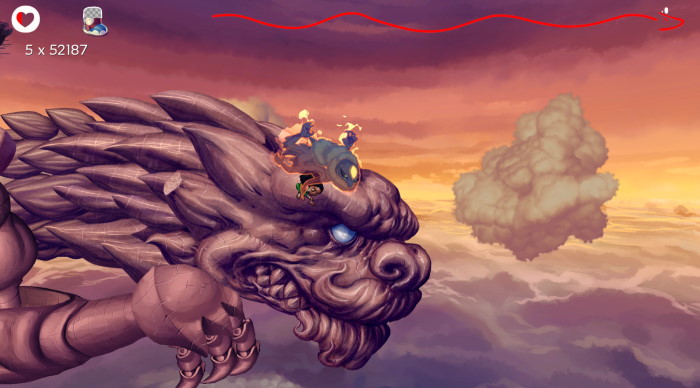 The main gameplay mechanic has you running on the different serpent-like dragons, and when you reach the head, it’s time to stab it to the beast. Depending on the dragon type, there are a few different ways to damage it, and you only have a short time to do so before it shakes too much and drops you. This is when the second gameplay mechanic comes in: skydiving on the Earth’s atmosphere, which means you’ll eventually manage to reach the Earth’s surface. Those sequences are very neat and were overall felt great. 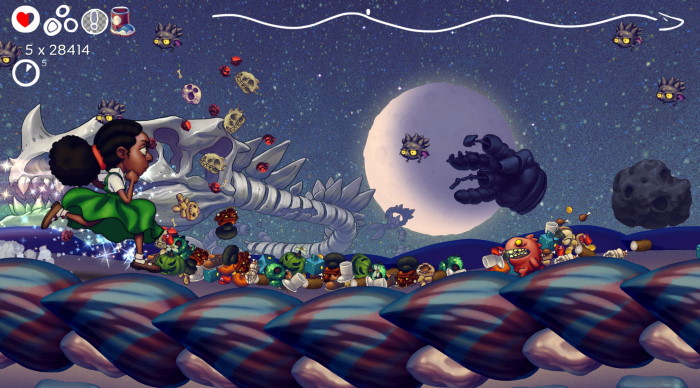 When you’re running on the different dragons, there are a ton of collectible just sitting there, and getting all of them also eventually gives you some permanent perks for subsequent runs. Once back at the space ship, stuff is exchanged for water, which is now the rarest resource on Earth and the in-game currency. Managing to kill dragons also nets you some bonus water for the tank, which can then be used to purchase other permanent perks not yet obtained.

The presentation of this game is amazing and is where this game shines. Everything is colorful and is hand-drawn, which helps everything pop. The dragon boss battles reminded me of the uniqueness of Odin Sphere. And then there’s the background music which is mostly 16-bit style songs and is very catchy, perfectly matching the pumped action sequences. 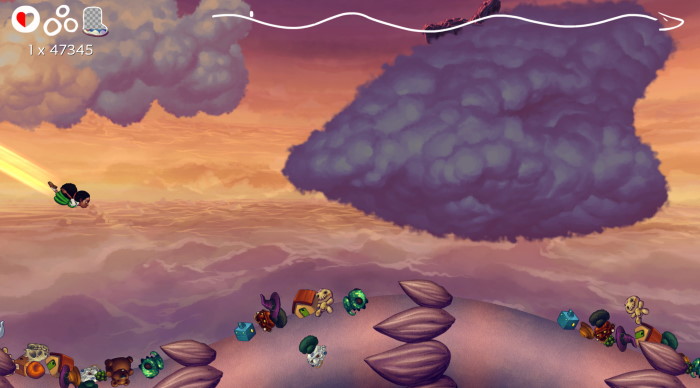 Final Thoughts
EarthNight is a great endless runner with a great presentation. I was confused in the beginning by how the gameplay was presented due to the lack of tutorials, but the game eventually grew on me. The difficulty is progressive, and defeating the different dragon species helps with the permanent perks they give for you to work through this roguelite game. Getting to the lower layers of the atmosphere will prove to be hard, but if you take your time to look in the settings of the game, you might find a switch to change the game to an easier mode – just saying!


Disclaimer
This EarthNight review is based on a PlayStation 4 copy provided by Cleaversoft.

Pillars of Eternity II: Deadfire – Ultimate Edition Out On PS4

Coffee Talk Out On Nintendo Switch And PS4