Are you ready for a new SEGA AGES game that had previously remained as a Japan-only release? Then come check out our SEGA AGES Ichidant- R review!


SEGA AGES Ichidant-R on the Nintendo Switch is a very interesting release in the revamped SEGA AGES series for Nintendo’s console since it’s a game that up until now had no console release in the West, remaining as a Japan-only title since its 1994 release. What is Ichidant-R? It’s actually the second game in a trilogy of similar releases with an overall action puzzle theme. It was originally released for the Sega System C-2 arcade before being ported to the Sega Game Gear, the Sega Mega Drive – the Japanese equivalent of what we know as the Sega Genesis – as well as to the Seg Saturn.


The controls are simple, and to the point, since you’ll only have to worry about pressing the Y, B, or A buttons to perform different actions based on the mini-game you’re playing. These buttons match, in that order, the A, B, and C buttons on the Sega Genesis – or, in this case, the Sega Mega Drive. Along with the Sega System C-2 arcade version of the game, SEGA AGES Ichidant-R on the Nintendo Switch also includes the Sega Mega Drive port for the game, with the catch being that said Sega Mega Drive version is only available in Japanese.

The good news is that the Sega Mega Drive version of Ichidant-R includes both an arcade mode, as well as a quest mode, in which you have to collect the five philosopher stones to destroy the barrier that is keeping you out of the evil King’s castle. Since odds are you might now know Japanese, the game’s digital manual will provide you with some clues as to what to do and where you need to go to find the monuments that contain each of the philosopher stones. This version also includes a competition mode in which up to four players can take on a race to the finish line by moving along a set number of squares to take on a mini-game based on the square that a player lands on, and repeating until someone reaches the boss. 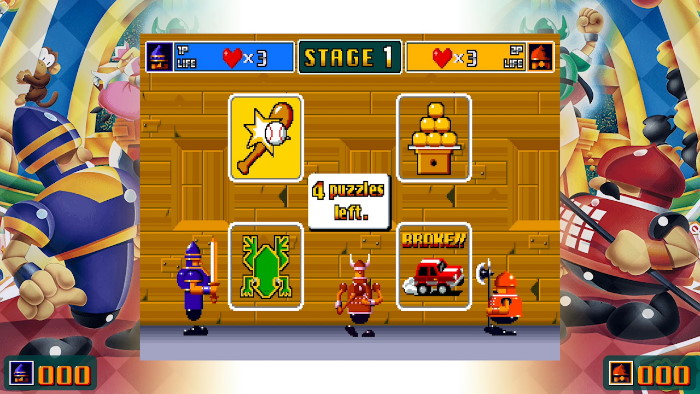 Ichidant-R includes 20 mini-games that will test your hand-eye coordination. It has a story mode that goes as follows: one day, for no reason, the evil King decided to kidnap the Princess, taking her to his castle. Because of this, two colorful heroes – one red and one blue – set out on an adventure to rescue the Princess. To do this, they must complete a series of mini-games so that they can best the challenges presented by evil King’s henchmen so that they can eventually reach the castle. You can also take on this game’s Arcade mode with an online play twist, battling against players from around the world.


As you start your adventure, you’ll notice four different mini-game icons on the screen. To select one, you’ll have to press the Y, A, or B buttons to stop the spinning cursor, so that you can then take on the challenge the cursor stops on. If you’re bested by that particular challenge, you will lose a life. Lose all of your lives, and it is game over! Luckily, SEGA AGES Ichidant-R is a console release, and that means you’ll be able to press the X button to add another coin so that you can continue.

If you’re having a bit of trouble making some progress, you can turn on the helper function in the start menu, and this will increase your overall lives total and lower the quota requirement for beating each mini-game Once you’ve cleared a stage – that is after you’ve cleared four mini-games- you will go into a bonus stage in which you’ll get a chance to jump high as you try to collect as many cash bags as possible, as you try to avoid the bubbles on the screen so that you’re not trapped. 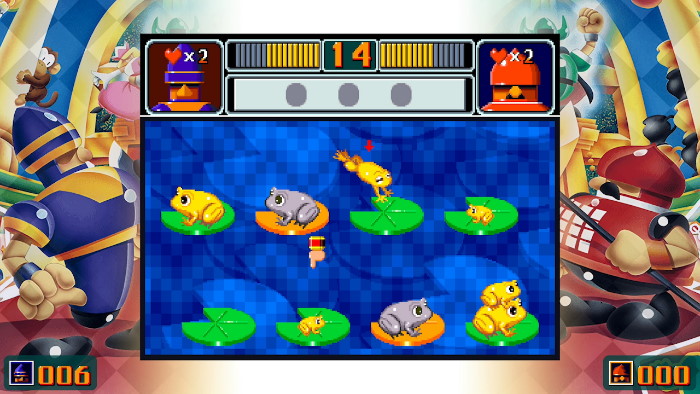 As for the mini-games themselves, they’re a varied bunch. One of them asks that you spot the two crackers that are identical from the bunch presented on the screen, another one has you selecting monkey pairs that move the same way, and there’s one that requires you to place all yellow frogs onto a yellow lily pad, but you need to remember that a frog can only stand on an empty lily pad or on top of another frog that is bigger than itself. These are only some examples of the mini-games you’ll get to play. As you complete one of the four available mini-games, a new one will be added into the mix so that you can then use the roulette-style cursor to select another one.

There are a few configuration options for SEGA AGES Ichidant-R on Nintendo Switch. You can select between the international and the Japan version of the game, as well as adjust the difficulty setting between the Easy, Normal, Hard, and Hardest options. There are also different display options for how the game is displayed on the TV or on the Nintendo Switch screen, with normal, fit, full, dot by dot, or vintage as your options, as well as having the chance to add scan lines, a smoothing effect, or a mix of both. The game has a special wallpaper as well that uses the promotional art for the borders, and you can change this to the other generic wallpapers that previous entries in the SEGA AGES also have to offer – or even remove it completely. 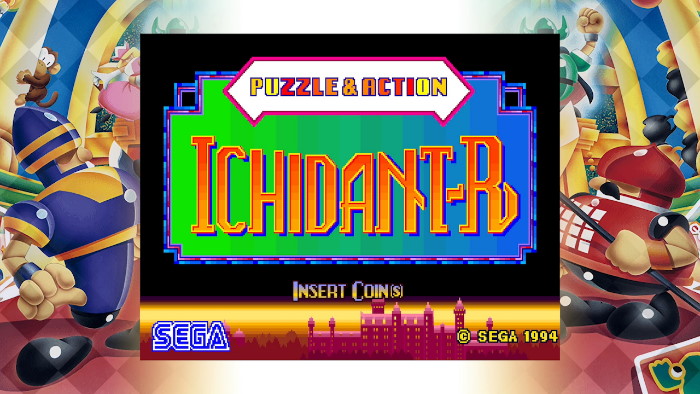 SEGA AGES Ichidant- R is a fun mini-game collection that is unlike anything else on the Nintendo Switch. Having this game released on a console outside of Japan for the first time is great news since it means we might get some other games from Sega on Nintendo Switch that were previously only available in Japan (or Europe). The game is entertaining when playing in single-player, but it’s certainly more fun when you’re playing with someone else.

Disclaimer
This SEGA AGES Ichidant- R review is based on a Nintendo Switch copy provided by Sega.

7th Sector On Its Way To PS4 And Nintendo Switch