Welcome to the latest release in the Pic-a-Pix series, this time returning with a sequel to the Classic game that released earlier this year. Check out our our Pic-a-Pix Classic 2 review!

This is a double review for Pic-a-Pix Classic 2. Ceidz and ThaRaven403 played the game, and this review presents what they both had to say.


Pic-a-Pix is a picture logic game, sometimes known as Picross, Nonogram or Hanjie, where whimsical pixel-art pictures are created by solving puzzles.

For those who haven’t played the original game, here’s some details on how the game is played. For each puzzle you start, you are presented with a blank grid, ranging from the smaller ones at 15 x 15 tiles to the larger ones at 30 x 20. You’ll paint some of the tiles on it to eventually form a pixel art image. Each row and column has a series of numbers that represent the length of block sequences you have to paint on the row or column. For example, in a row with 15 tiles, with the numbers 8 and 6 next to it, you’ll have to start with a sequence of 8 painted blocks, leave a blank tile then paint the 6 following ones. While this is a rather simple example where you can easily deduct how you place things, it can quickly become a tricky matter when the numbers don’t add up to the total number of tiles on a row/column. When you get rows with a single 4 number in front of it, you know you’ll have to work on everything around it to eventually get to know where those 4 tiles would be located. 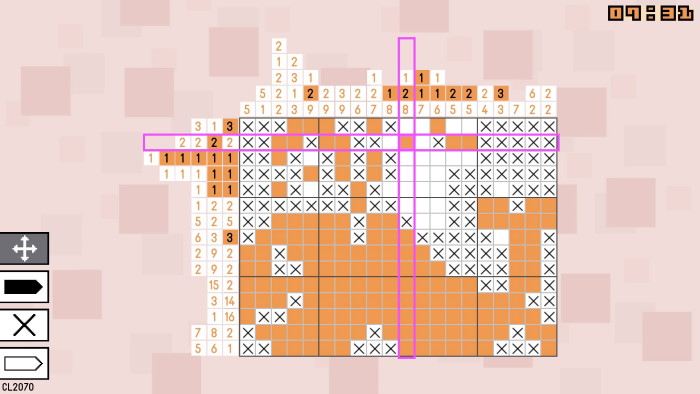 While the first title in the series started with easy puzzles on a 5 x 5 grid, this game expects you to have played it when the smallest puzzle is 15 x 15. Since I haven’t played the first one, the first thing I did was look at the instructions on how to play the game. It felt like it would be easy, but as soon as I started my first puzzle, I quickly got to realize that this kind of puzzle is not for the faint of heart. When I finally managed to finish it, the timer clocked in at about 20 minutes, and all the other puzzles I did took me more time. There is a hint system you can use in the game to fix tiles you are in error, but using it prevents you from getting the puzzle’s medal. But with that being said, no matter how hard I thought the game was, it was hard putting it down, because it’s incredibly rewarding to be able to complete those puzzles!

And if you’re anything like me, you’re probably aiming for the platinum trophy the game offers, especially since the game’s cross-buy can provide you with two platinums. The thing is, you need all those medals for the platinum. Yes, all 150 puzzles completed without using the hint system. To put it simply, if you’re not using a guide, this is a truly time-consuming feat to pull off!

As ThaRaven403 already explained, Pic-a-Pix is a pixel art game in which you begin with a blank grid, containing numbers on the left and the top, representing the number of pixels that must be lit in that row and column. The objective of a Pic-a-Pix game is to discover the hidden pixelated picture hidden in the grid.

I was new to the Pic-a-Pix, so this was my first dive in this game. I was surprised by the difficulty as the first level begins with a 15×15 grid, being actually a sequel to Pic-a-Pix Classic, since that game began with easier grids. Nonetheless, with trial and error at first, then watching closely the different numbers in order to devise some logic, I managed to clear the first grid. If you’re stuck, there’s an in-game hint system available by pressing the Triangle button, but while it helps tremendously, it also locks the trophies linked to that grid class being cleared without using the hint system. Needless to say, I had a hard time clearing the bigger grids and needed the hint system! 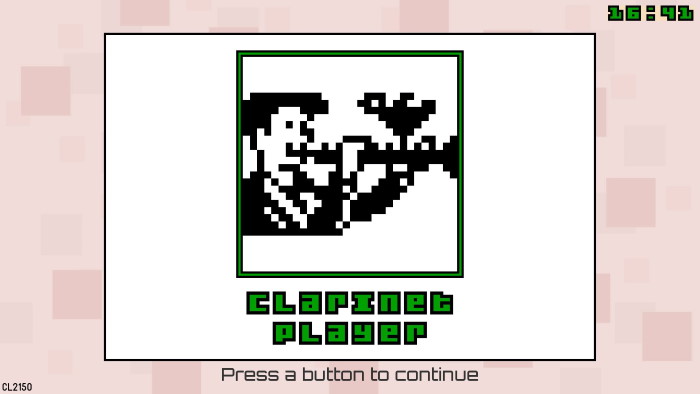 As for the presentation of this game, and since this isn’t the “Pic-a-Pix “Color”, this game presents a monochromatic pixel art image. The soundtrack was good, and has that classic 8 bits feels typical to the Lightwood Games releases. There aren’t that many tracks in the game, so if you’re aiming for the Platinum Trophy and are going to clear the 150 trophies, you’ll notice that the tracks loops quickly. I also liked that there were different languages available: English, Spanish, Deutsch and French.

I liked discoering the different pixel arts hidden in the different grids, but be warned that this release is one of hardest Lightwood Games releases I played! 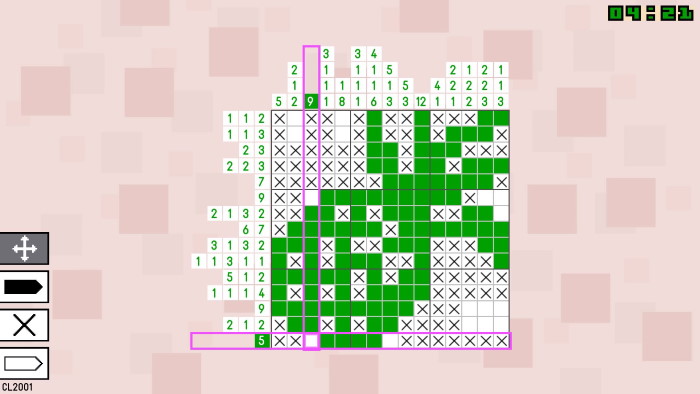 Final Thoughts
Pic-a-Pix Classic 2 is a new solid entry in the Pic-a-pix series, which is building up a nice video game library at a steady pace. The gameplay is easy to pick-up, but really hard to master so be warned that this game is not a walk in the park. We both liked playing it and going towards new Platinum trophies for our collection. Speaking of which, since this a cross-buy release, you will get the PS4 and the Vita versions, with the chance of getting two new Platinum Trophies for for the price of a single game!

Disclaimer
This Pic-a-Pix Classic 2 review is based on PlayStation 4 copies provided by Lightwood Games.

8-Ball Pocket Out On Nintendo Switch Next Week