Set forth on an adventure with your new friend, Glitch. Search the land, unlocking the patterns and parts needed to weave your own tale… in Woven! Check out our Woven review!


Welcome to a world where woolen creatures once lived in peace. Stuffy is a well-meaning but rather clumsy stuffed animal that wanders the world alone.
Glitch is a metal firefly that has lost its memory and identity.

Was Stuffy left behind? Where did all these machines suddenly come from?

Join them on their journey through a world of wool, fabric and hidden dangers.

The world of Woven is filled with obstacles and challenges. You will have to find blueprints to modify Stuffy’s shape and abilities.
Elephant legs may be strong, but rabbit legs can jump.

Keep an eye out for hidden paths while you explore the world.
Find secrets that reveal the forgotten history of the world.

Your Stuffy, your style.

Over a hundred different hidden fabrics to discover.
Experience a fully handcrafted world.

An epic adventure, told through rhyme.


Woven is a 3D adventure game in which you play as an elephant named Stuffy and his mechanical companion, Glitch. Woven was a Kickstarter game back in 2016 that did not end up getting fully funded. However, the team at Alterego Games continued with development, and three years later, the game is out on PlayStation 4. How did it turn out?

Woven puts you in a world made of fabric, where everything strands out thanks to being made of this material. Woven really gives me vibes of LittleBigPlanet in a lot of ways, but as a game set on a 3D plane. You explore all of this as Stuffy, a little elephant that sets out on a new journey. The narrator helps to tell Stuffy’s story as he proceeds through this fabric world. Soon after starting, you will run into Glitch, a mechanical flying entity who will join you. Glitch has the special ability to make machines work, which is going to prove to be a valuable ability. 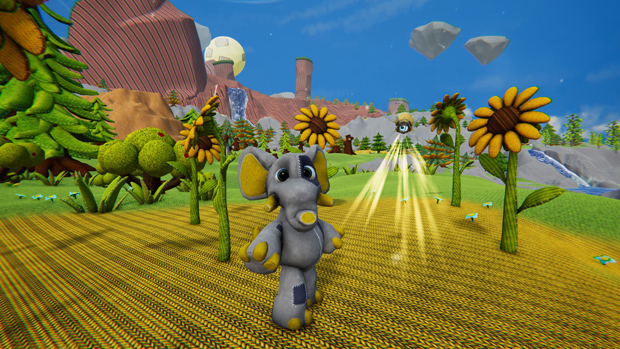 Two of the major machines you will find are sewing machines, which allow you to change Stuffy different parts and materials, and blueprint machines which give Stuffy new parts. The blueprints will give you a new animal that Stuffy can change into, whether it’s a deer, a goat, or an aardvark, to name some examples. You can mix different parts on Stuffy, choosing between the available heads, bodies, arms, and feet. Abilities are tied to the parts, so while one set of feet may have the stomp ability, another might give you access to a jump.

Along the way, you will need to use these abilities to carry on with your adventure. Woven does a good job of giving you new abilities at a steady pace, letting you know what ability is needed to progress. A sewing machine is never too far away, so backtracking isn’t usually a big deal. It’s not just parts that you’ll be collecting since you will also find patches of colors and patterns on animals, flowers, and walls in each area that you can scan with Glitch. Once a pattern has been scanned, it can be applied to any part of Stuffy, so you can customize it to your heart’s content. Patterns will also be needed for some puzzle solving. 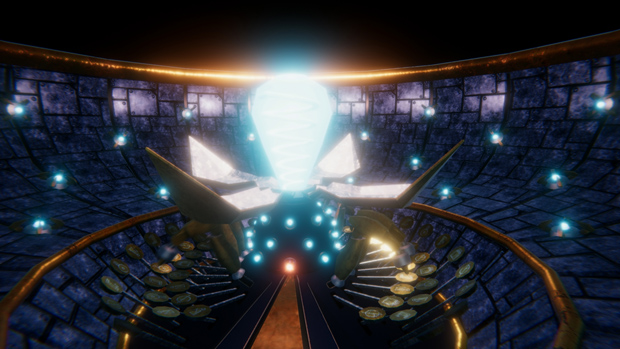 For an early puzzle, I met a giant snake that wouldn’t let me pass until Stuffy had a pattern that matched its skin. The game then pointed me to a patch on the wall that matched the snake. I had Glitch scan the patch, and then I was able to go to the nearby sewing machine and change Stuffy’s pattern so that the snake could finally let me pass. Another puzzle had me stopping on the ground near an apple tree to knock an apple down into a river. As it traveled downstream, it caught the attention of a warthog, and then it was a race to see who could get to it first. Along the river path, I ran into some giant blocks, and I couldn’t get to the apple. I then moved the blocks with my push ability from the other side, cleared the path, and tried again, getting to it first so Glitch could scan it, and I then had a new bright red as a customization color.

Using your abilities is easy. Glitch’s are tied to the L2 button, which will pull up a menu so that you can use the left analog stick to select one. Stuffy’s abilities are mapped to the R2 button, and you will be using the right analog stick to select them. Nothing overly complicated, keeping things simple so that players of all skill levels can have a good time with Woven.

The world itself was fun to explore, and I often found myself wandering here and there, checking every nook and cranny as I searched for blueprint machines and new patterns in each area. The one thing Woven is missing, though, is a world map that you could pull up to see where you have been. I finished the first level without realizing that I would move on to a new area. Had I known, I would have spent some time doing more backtracking looking for any missing patterns.

The game’s aesthetic is great, with every part of the world looking gorgeous with its fabric and buttons and stitches. I would often just look at what was coming in the distance and take a second to take the view in and enjoy things. The team designed a beautiful world with some great-looking characters, wrapped by a fun adventure game that was fun to explore.

Final Thoughts
Woven has been a big surprise. It’s a new take on the adventure genre – which I adore – set in a beautiful world with tons of heart and soul poured into its characters and the relationships between the main ones you’ll control. If I needed to ask for one thing to be changed is for the game to get a world map. But even without a map, this is a game that is worth your time and money on PS4.

Disclaimer
This Woven review is based on a PlayStation 4 copy provided by STICKYLOCK BV.