Sparklite from Merge Games is a top-down roguelite action adventure on PlayStation 4 that is a blast to play. Learn more in our Sparklite review!

In Sparklite you will take control of young Ada, who is about to set out on a big adventure. There’s a nasty storm that is making it hard for your airship to remain in one piece as it cruises through the sky. To make matters worse, the airship has been invaded by small acidic and gooey entities that must be defeated as quickly as possible. Once the creatures have been dealt with, another issue pops up: the airship is coming apart, and you must quickly hammer down the big nails that are coming up through the floor before it all comes down in pieces. 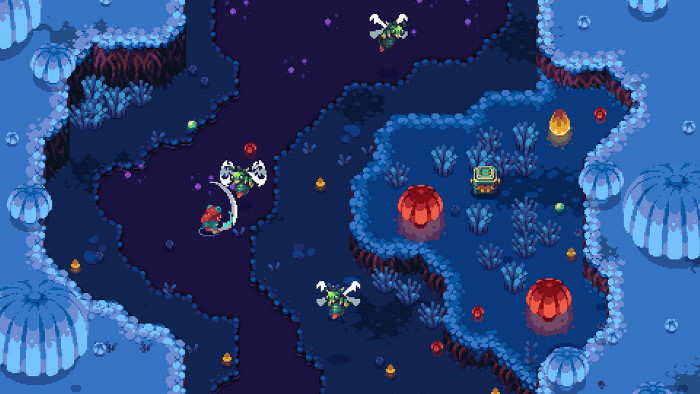 The first thing that grabbed my attention when I started to play Sparklite was the great pixel art style, which is very detailed, helping everything pop as I played. The game certainly has a big The Legend of Zelda: A Link to the Past influence, and Sparklite manages to pay homage to the beloved retro classic from the Super Nintendo Entertainment System era, while also taking things further and doing its own thing. The music is also a highlight of this experience, as it is one you’re going to remember even after you’ve completed your journey.


After your escape pod lands on the ground, you will explore a small area with a door that at first will not open for you. Luckily, your necklace, a family keepsake that has been with you since you were a child, has some special powers you were not aware of. Once the door for the building opens, you will find yourself inside, looking at a floating crossbow, waiting for you to collect it. Once you grab it with the X button, you’ll be able to shoot energy blasts from it by pressing the Triangle button, as long as you have enough energy at the bar below your heart bar. 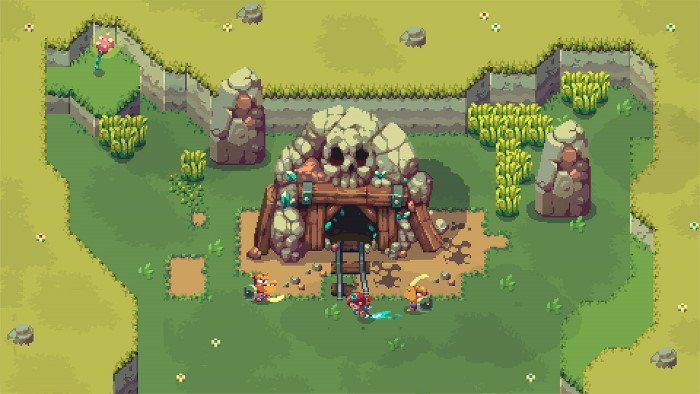 The crossbow will prove to be very useful, as it will allow you to hit enemies that are a bit out of your melee range. Hitting enemies with your close-range weapon by pressing the Square button, or by holding it to charge up a more powerful attack, is the ideal way of dealing with most enemies, but keeping a safe distance between them and you is not a bad idea in some scenarios. You can also press and hold the Triangle button to charge up your attack so that you can fire the energy blast even further, which is also very useful for hitting switches that are certainly out of your reach. Combine all this with being able to dash around by pressing the X button, and you’ll have what it takes to survive out in the harsh world.


At the end of this short tutorial section, an interesting thing happened. There was a pedestal where I had to place the crossbow, and after doing this, the weapon was reverse engineered, basically giving Ada the “recipe” needed to make a new one at the workshop… that is, as long as you have the materials and the Sparklite for it! Sparklite is the primary currency for Geodia, and you will obtain it from the enemies you defeat, from items you destroy, or just growing on trees! 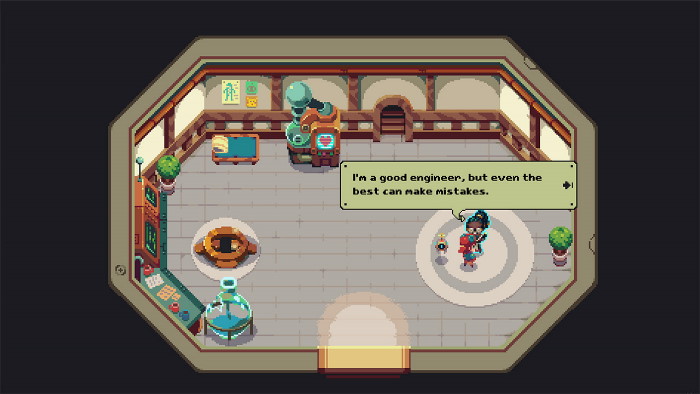 After you’re defeated by a boss you shouldn’t have been fighting so early in the game in the first place, you’ll be rescued by the crew of the Refuge, state-of-the-art floating vessel. It is there that your wrench multitool will be enhanced to receive a Patch Board where you can install different patches that will make it possible to boost your stats or to gain new abilities to aid you on what is to be your new adventure. You could, for example, install a patch that will give you a bit of extra health, which is always great since the more health you have, the more hits you’ll be able to take. You could also benefit from a patch that boosts your wrench’s attack power. As long as you collect as much Sparklite as possible, you’ll be able to get better patches for your multitool.


The Sparklite you collect can also be used to help those aboard the Refuge so that they can, in turn, help you. Before you’re defeated by the first overpowered boss you run into, you’ll meet the owner of a widget shop who is having a rough time after a tremor damaged his store. You will find him again aboard the Refuge, and once you have enough Sparklite to power his widget shop, he’ll be ready to help you on your quest. The aforementioned workshop for inventing gadgets will also require your support in Sparklite. 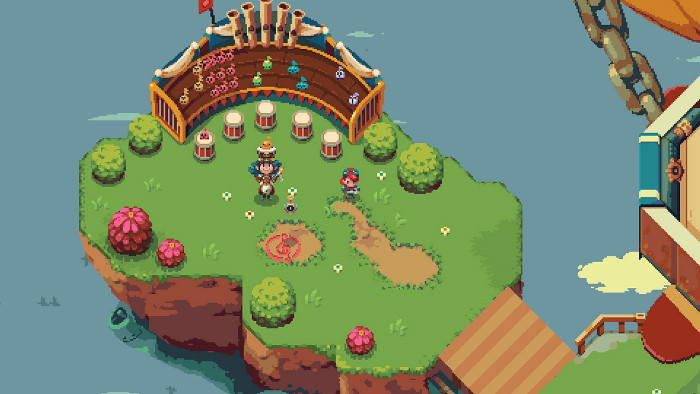 It’s at the Refuge’s upper left corner that you will also learn about one of the elusive collectibles in the game: Beats! These are hidden all over Geodia, hiding from the nasty pollution that the Baron has spread all over the land. The pollution makes it harder for the Beats to sing, and when a Beat cannot sing, it will end up dying. This is why they have gone into hiding, so you’ll need to search high and low to find as many as you can so that they can be sent back to the Refuge to be safe with Harmony and Tempo, her golden Beat companion.


As you explore each location, you might end up finding a variety of temporary gadgets to use for your run. These will go into your supply bag, and you’ll be able to select between them by checking your bag after pressing the touchpad on the DualShock 4. Each gadget will have a limited number of uses, so be sure to make the most of them! You will activate them with the L1 button, and they include things such as timed bombs that will go boom a few seconds after you place them, a light that can illuminate an area for a short period of time, or a pack that will heal some of your health, to name some examples. 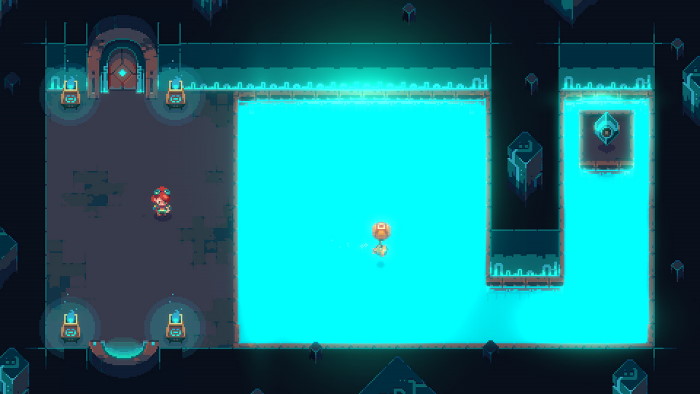 This being a roguelite, every time you die, the world below will change. This is explained by way of the fractures that are becoming stronger and stronger, and that keep rearranging the land. After being defeated, the crew of the Refuge will save you, but you will lose any temporary gadgets you had found. You will get to keep your Sparklite, so you’ll be able to make some progress after every run, as you spend that Sparklite to upgrade the Refuge, to get permanent gadgets and trinkets, and to obtain more and more patches to add to your multitool.

And now, let’s talk a bit about the trophies for Sparklite. This game has a full trophy list with a Platinum trophy, and the good news is that there are no missable trophies since after beating Sparklite you will be sent back to before you took on the final boss so that you can do some trophy cleanup and unlock the ones you’re missing for your Platinum trophy run. There are trophies for defeating each of the regional bosses, for collecting Sparklite, for obtaining trinkets and gadgets, and more. It’s a varied list that will keep you busy for a while due to the game’s roguelite nature. 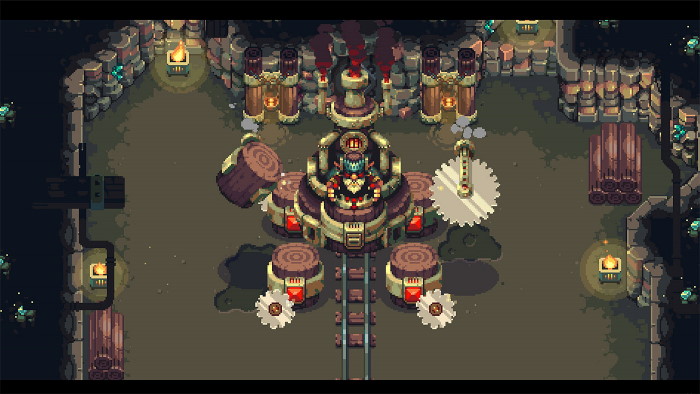 Sparklite is a fun top-down roguelite action adventure on PlayStation 4 that pays homage to the old-school style entries from The Legend of Zelda, particularly The Legend of Zelda: A Link to the Past with a dash of the vibe for The Legend of Zelda: The Minish Cap. It offers a nice progression system by which you can always be making some progress towards increasing your overall health, unlocking new gadgets and trinkets, pushing further into a particular area as you learn the movement and attack patterns of the enemies and the bosses for each location. Sparklite is out on PS4 for $24.99, and it’s well worth its asking price.

Disclaimer
This Sparklite review is based on a PlayStation 4 copy provided by Merge Games.