Dark Devotion is a challenging indie game that is now one of the must-play releases on PS4. Curious so far? Read more about it in our Dark Devotion review!


Dark Devotion invites you in a rich and peculiar universe. You will go through more and more confrontations. If you happen to succeed once, good job. But don’t even think that the next step will be as effortless as the previous one.

I imagine that when Hibernian Workshop sat down to create a design document for this game, the first thing they wrote down on their list was “atmosphere.” It would seem that word was at the heart of every aspect of the game when it was being put together – every inch of it, every pixel, was designed to build on the foundations of a very ominous atmosphere.

In Dark Devotion, the world is ruled by a religious order that believes the only way to worship God is through suffering. Worshipping God is mandatory, or else death will be your reward. A group wanting to escape this endless cycle decides to run away as far from it all as possible. This decision proves to be questionable as what they discover is just as bad, if not worse, than what they were running from.


You play as an unnamed member of the refugees who have taken shelter within the “Filthblood Shelter,” which acts as your hub world where you can purchase upgrades, acquire new quests, change your equipment for upcoming adventures. It’s also your respawn point for when you inevitably die and die you will in a game that clearly went to the Dark/Demon Souls school of difficulty. 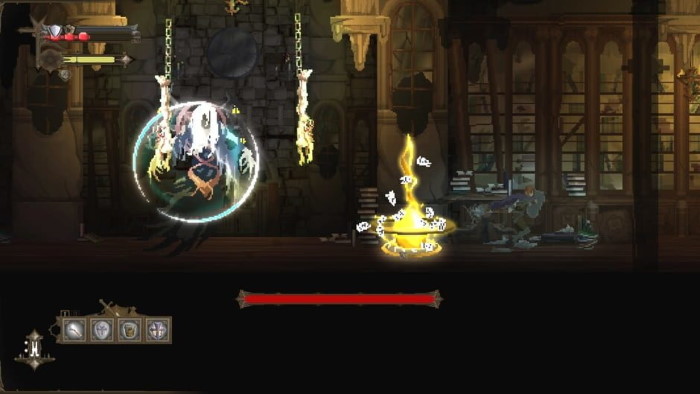 Even though this game is 2D, the Souls influence is presented front and center, from the game’s visuals to its monster designs, and the whole lost and foreboding atmosphere you come to expect from said type of game. As I mentioned already, you will die a lot in Dark Devotion, and, at first, you will resent the game for it. But as you progress, you will begin to understand and improve through your suffering… and through suffering, you will be rewarded for your perseverance.


To call this game “Souls-like” and leave it at that would not do Dark Devotion justice, as it’s a little more nuanced than that. Using the Souls formula as a leaping point, the game takes on a personality all of its own. The theme of atonement and suffering is consistent throughout the whole world. As you suffer your way through the litany of monsters acquiring “faith,” you will occasionally come across statues where you can pray to receive blessings, which act as buffs that affect your current run. You’ll sometimes receive items and weapons. What is interesting about this is how you do this.

To pray at a statue, your character has to get on her knees and spend time praying. To pick up an item, your character has to go through the process of kneeling by pressing down on the left analog stick before pressing the Square button to pick up the item, hammering home the theme of submitting to the whims of the world. This is exactly where the game excels, on how it leans on this overall theme, embracing its atmosphere. 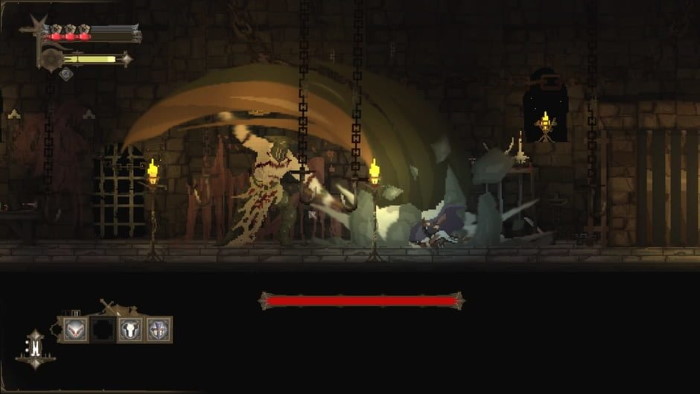 The soundtrack and sound design play just as big a part in emphazising said theme. The music and sound effects are not overwhelming, doing their job to support a very engaging world design, particularly during the boss fights, of which there are quite a few. The gothic music will swell appropriately to punctuate an intensification of a battle or remain somber at the beginning to let you take on the calm-before-the-storm feel of a fight that is about to kick into high gear.

But do not get distracted. Remember that everything here is trying to kill you. Everything has been designed to remind you just how flimsy you are. Using your weapon and evading attacks will cost you stamina. Casting spells costs faith. Your health bar is pitiful, since receiving two hits from anything will result in your death. Armor can be worn to protect yourself, but all that does is just add another courtesy hit or two to save you from death… but you are just delaying the inevitable. 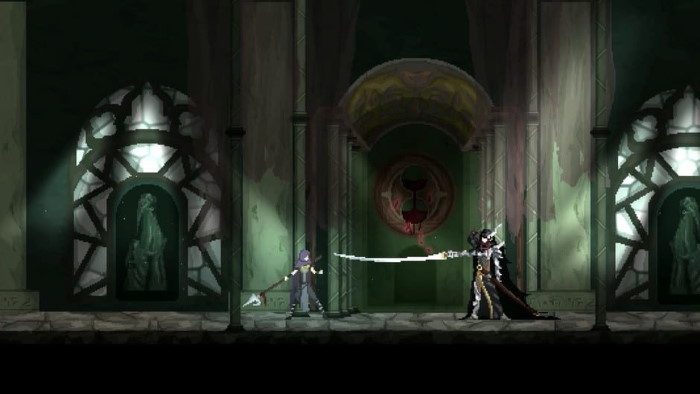 The feeling of hopelessness extends to the item and weapon system. Almost nothing is permanent because as soon as you die, all your progress is wiped, including the bosses you’ve defeated. All your items disappear, as do any blessings gained. The feeling of progression does exist as killing some bosses for the first time opens up new areas to explore. Accomplishing certain feats allow you to unlock permanent blessings, and completing certain quests and finding specific weapons allows you to unlock them on a more permanent basis. The system is a chore at times, as you cannot predict what you can find and how to make it permanent, but at least you know that might be an option at some point.

The controls were interesting to experience. I would have preferred the option of customizing the controls. I do not get using the left analog stick for movement in a 2D game or using the trigger buttons to attack, and that is what you have to do – and the only way to survive is to get used to it! The R2 button is used to attack with your primary weapon, with the L2 button for using whatever your secondary equip is. The Circle button is for dodging, and the D-Pad is for quick use of items. The controls took some getting used to, but as with most games with “awkward” controls, after some time, it becomes second nature. Even though there is the slightest of delays when using the L2 and R2 buttons, you will learn to compensate for it.


There aren’t many faults to find with this game, just more things to praise. For example, as you venture through each playthrough, you will encounter a number of the aforementioned blessings and “curses,” which act as debuffs for your playthrough. The game treads the line between punishment and reward quite well and is sure to “reward” you adequately. Spend too much time using the dodge roll, and there is a chance you may gain the debuff Winded, which limits the amount of stamina you regain. Go too long without repairing your armor, and you may get rust, thereby limiting your damage output. But if you spend a lot of time dying in the same area, your determination will be rewarded because you chose to keep going back. Overcome a difficult enemy, and you may be rewarded for your perseverance. The system is well thought out, and I have to congratulate Hibernian Workshop for implementing such a dynamic and intuitive system. 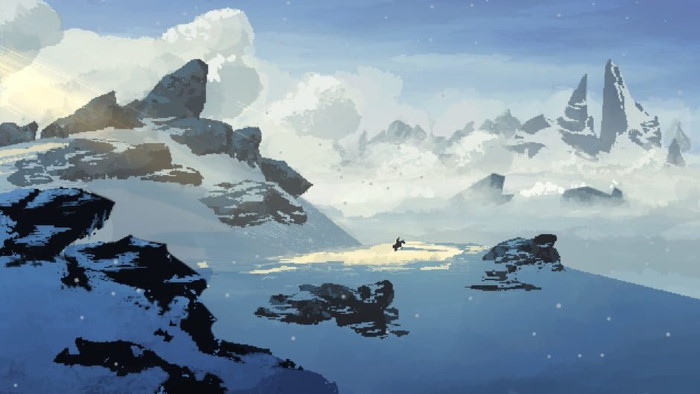 Another thing the game does well is in the look and feel of its bosses. The general mobs are designed well also with each one demanding you remember its own individual pattern and requirements to defeat them but where the game truly shines is in the bosses, yes the looks are good in their own right and tell their own story, but the combat is where it truly excels. The fights with each of the bosses are heart racing and satisfying even when you lose them. That isn’t to say they cannot come across as unfair at times, but when you learn to compensate for it.

Disclaimer
This Dark Devotion review is based on a PlayStation 4 copy provided by The Arcade Crew.