[Beyond PlayStation] Tools Up! Review

Tools Up! from All In! Games is a fast-paced couch co-op party game that is a lot of fun on Nintendo Switch. Learn more in our Tools Up! review!


In Tools Up! you will take control of a crew of renovators who must overcome the many obstacles they’ll run into as they try to make the most of each scenario. There’s a Campaign mode, as well as a straight-up Party mode where up to four players can get their renovation on. For Campaign mode, you’ll start by opening the one door available to you – with the rest closed off until you’ve completed the stages before it. For each of the levels you’ll take on, you can get a rating based on your performance of up to three stars. Before you start a level, you will know the points you need to aim for to get each of the stars, so that you can plan your actions accordingly. In Party mode, you’re going to be aiming to complete each available level as fast as possible.

When you’re holding the blueprint, you can rotate the camera with the L and R buttons. To grab something, you can press the A button. If you’re already holding something and want to drop it, then press the A button, and you’re set. You can throw stuff with the B button, which can speed up some processes. You can hold the X button to collect or apply items as needed. The game will show you the basics during the first handful of stages so that you can get the hang of things before the difficulty starts to be dialed up. 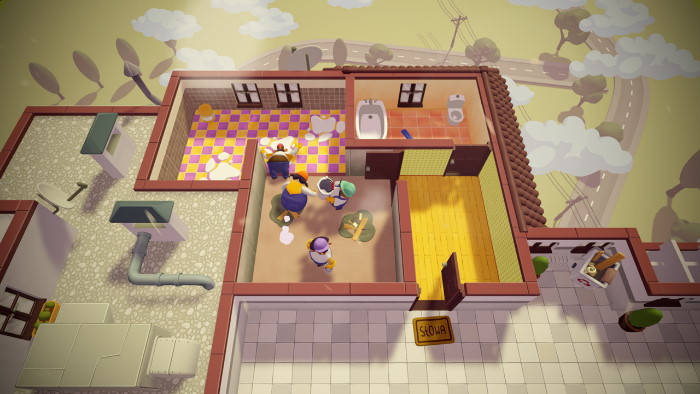 Your first job will be to paint the bare walls of a house so that they all match. You need to do this carefully, because you might end up knocking down the can of paint, leaving a mess on the floor. Completing each task as fast as possible is good, but you also need to keep all areas clean! In fact, once you’ve completed a job, you still have a lot to do since you’ll need to tidy up the place by bringing all of the tools outside of the location, cleaning up any mess you’ve made as well. 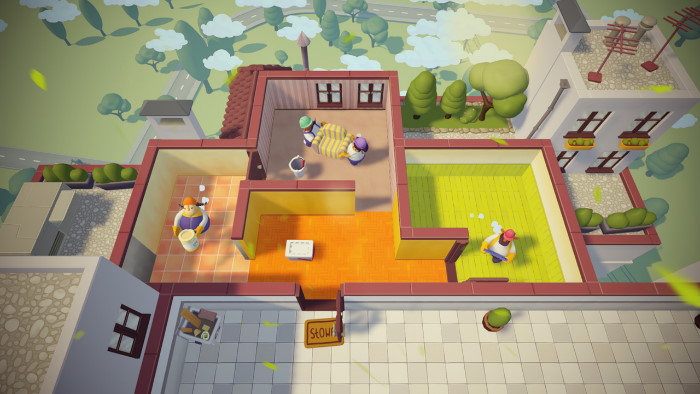 You’re probably going to make some mistakes along the way, especially when there are other people playing in local couch co-op. When this happens, you’ll need to fix the mistake as fast as possible so that you can still have enough time for you to complete each task. You could, for example, be asked to paint the walls of one room a particular color, while the walls of another room need to be painted with a different color. If you don’t pay attention to the blueprints, your crew could end up painting a couple of walls with the wrong color before you realize that’s not how the room was supposed to look. Be sure to pay attention to the “Overall Progress” bar on the upper part of the screen since if it’s not moving up after you complete part of a task, that means you’re doing it wrong. 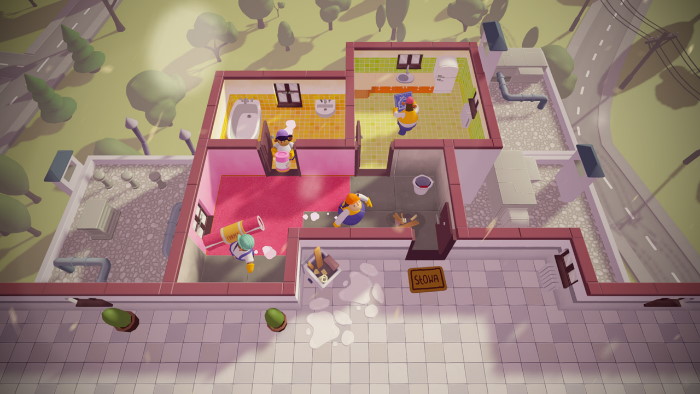 The more stars you get for your hard work, the more characters you’ll get to unlock for your crew. First up is a new crew member with a rather round figure, a tan look, and whiskers. Get five stars, which you should easily obtain from playing the first two levels in the game, and you’ll unlock a new character for your group. The next unlocks will happen when you reach fifteen and twenty-five stars, respectively, allowing you to select from the new characters by pausing the game and picking the character selection option to be taken back to the menu. 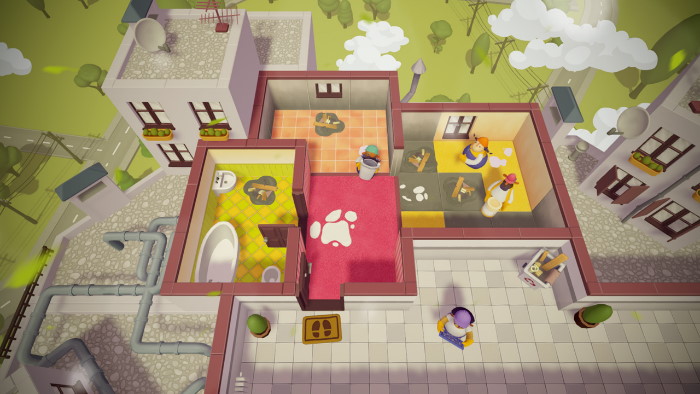 Tools Up! is a fun couch co-op game with a colorful and charming presentation and plenty of projects to complete. As long as you communicate with your crew members and divide the different tasks that need to be completed, you should have no issues. Make good use of your trash bucket – and of the trash deposit outside of each location – and you’ll be able to remove debris, tear down wallpaper, remove old carpet floor, paint rooms, and more. Tools Up! is available for $19.99 on Nintendo Switch, and it makes for a fun local party game.

Disclaimer
This Tools Up! review is based on a Nintendo Switch copy provided by All In! Games.

60 Parsecs! Out On Nintendo Switch Today