The sequel to Knights of Pen and Paper +1 Deluxier Edition on Nintendo Switch gives us more of what I loved from the prequel when I played it for our review, and then some. If you’ve played Pen and Paper +1 Deluxier Edition, right from the start, you will notice that the graphics have been considerably revamped, going beyond the pixeltastic look and feel of the previous game in the series to give us a jump in graphics that will remind you of the Super Nintendo Entertainment System era – compared to the souped-up NES look of the previous game. 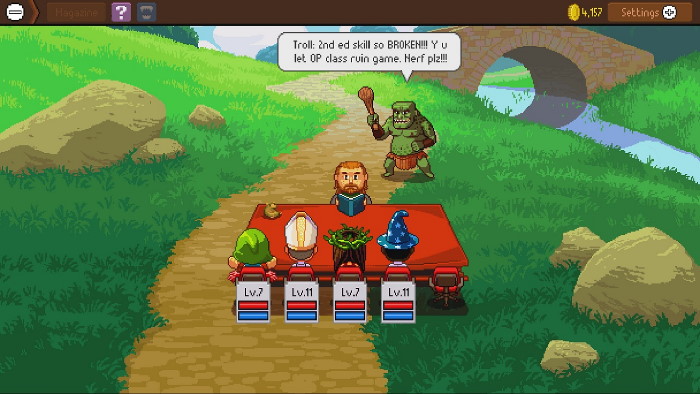 As was the case for the previous game, you will be taking on a big randomly generate adventure with turn-based combat. The game pays homage to the classic dungeon crawling sessions from “back in the day” of the Dungeons and Dragons-style variety, and for this digital release you’ll be filling up the slots at the RPG table so that you can take a growing group of adventurers on a dangerous journey, guided by the Dungeon Master who will spice things up as it brings the characters, settings, and story to life. 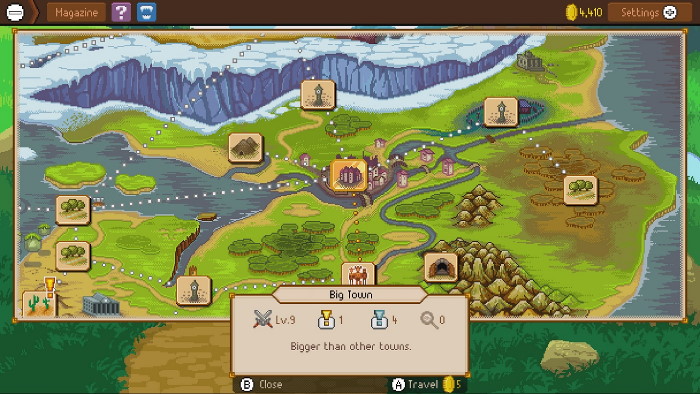 Your new adventure will begin as many RPGs do: by having you control an overpowered character taking on an “end of the game” battle against a massive boss that you probably shouldn’t be fighting at the start of the game. Since the level 99 character of this particular player is taking on 2nd edition, the Dungeon Master suggests getting him started with a level 1 1st edition character, which the player refuses to do. Because of this, it will be time for the Dungeon Master to bring in some of his friends for a new session.

And now, for the proper start for your journey, you will select two players to join the game, as well as the race and class for said characters. The player character can be a jock, a cheerleader, a surfer, a rich kid, a rocker, a goth, a lab rat, or a hipster, each one with different base stats for damage, threat, critical, initiative and damage reduction, as well as some different abilities and dice. The race will also change some of the stats around, as well as opening up the possibility of using a new set of skills. Class is also a big one since you’ll find yourself picking from the cleric, paladin, warrior, mage, thief, and hunter options. Be sure to plan for having a balanced party – especially once you unlock the third, fourth, and fifth party slots – so that you can always have a good set of skill options at your disposal. 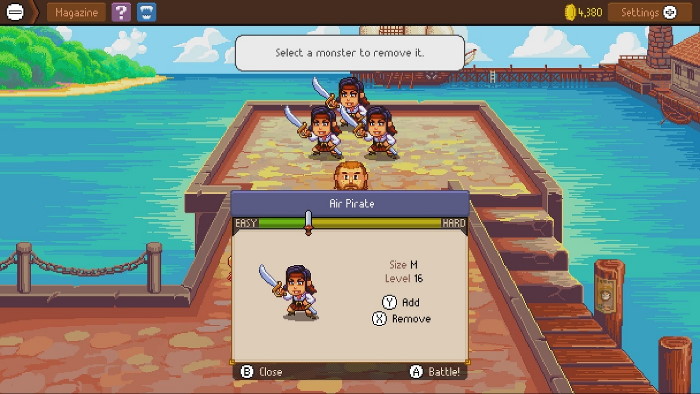 With the gold coins you collect, you can spice things up and revamp your gaming room. You can change the table you’ll be playing on so that you can get some bonuses that will help you on your adventure, restoring some of your health and energy, or lowering the damage you receive. You could also decide to buy one of the available arcade machines so that you can deal some extra bonus damage to enemies when you use skills they’re weak against or perhaps a machine that can lower an item’s asking price. These are only some examples since you can also buy sofas, games, rugs, shelves, and board games to give you different boosts.

Gold coins are important since you also need to spend some coins to travel between the different areas on the map. This is not going to be an issue after a couple of hours of playing the game, but at the start, you might end up spending too many coins on other stuff before you realize you need to spend some for your travel expenses. When traveling, you’ll have to do a roll (you know, of the dice) to see if you have a safe travel, or if you’re ambushed on the way, so you better always be ready for things to go wrong. If you manage to roll a 20, then you’ll get the chance to find a secret interaction or collect a bonus item. 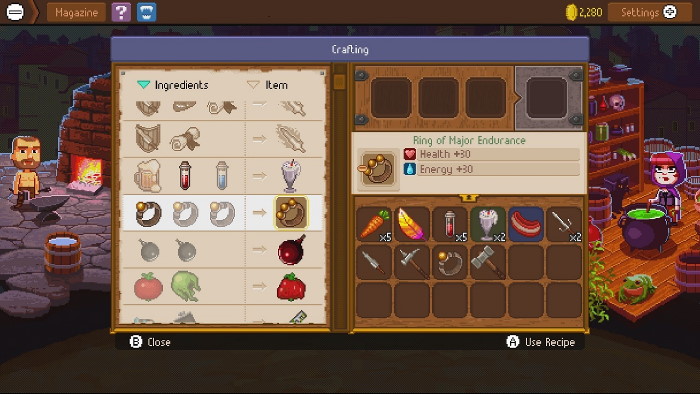 On that note, another thing you can spend your gold on is equipment, trinkets, and items for your party. Equipment will feel a bit expensive during the start of the game, but every single extra point of damage you can deal to enemies and every bit of extra protection you can get for your party members will go a long way. Trinkets will also boost things such as your total energy or hit points, or they might add an extra boost to the overall experience points or gold you collect in battle. Items are also important to have in case you need to heal a character or cure an ailment, and your cleric is out of energy or has been defeated. 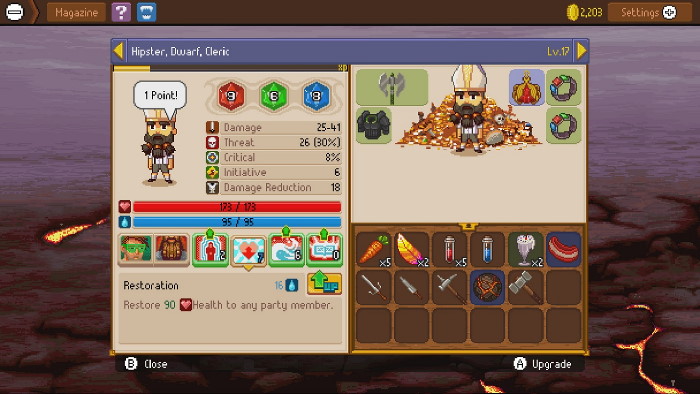 When you’re not in battle, you can also press the – button to access the upper left corner of the screen that has a big button labeled “Magazine.” What this does is give you access to different issues of Modern Dungeon magazine. Inside of each issue there are different options for you to spend your money on, which will allow you to obtain powerful items, unlock new character players, new classes, new story lines with quests, and more. The magazines will also have some informative articles you should check out.

The more times you battle against each enemy type, the more information you will learn about it, which will be added to the corresponding entry in the Beastiary. When checking a monster in the Beastiary you will get to learn its size, soft spot for critical hits, damage output, critical hit percentage, overall health, and any other valuable information that can help you defeat it more easily during your next encounter. You will know how much you have yet to unlock for each enemy by checking out the percentage displayed next to its name.


Having lots of items is always a good option so that you can be ready in case you need to heal some nasty wounds or require some extra energy to dish out a powerful skill that can turn the tide of battle. On top of this, you should also be collecting lots of extra items and materials so that you can end up crafting more powerful items to aid you on your adventure. You could also end up finding additional recipes by investigating each area you visit, or as a reward from a quest here and there, allowing you to do things such as enchanting a weapon to boost its stats or to add special abilities. 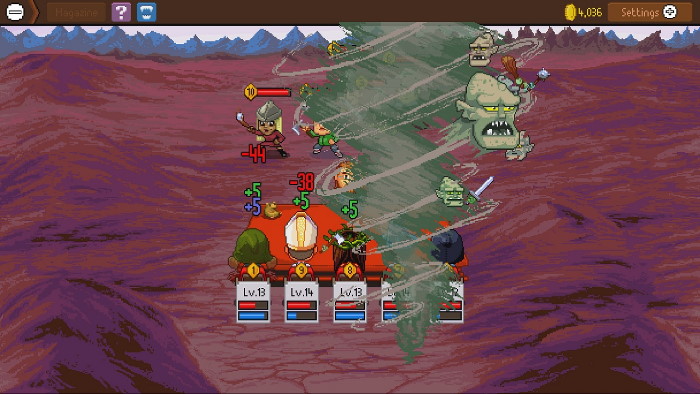 Disclaimer
This Knights of Pen & Paper 2 Deluxiest Edition review is based on a Nintendo Switch copy provided by Plug In Digital.

Soccer, Tactics & Glory On Its Way To Consoles