Cardpocalypse from Gambrinous and Versus Evil is a 1990s infused RPG with a card-based system that is a lot of fun. Learn more in our Cardpocalypse review!


In Cardpocalypse, you will take control of Jess- a girl who is in a wheelchair – who is getting ready for taking the bus to his first day at a new school. If she doesn’t hurry up, she’s going to be late, because she’s stayed home for too long watching TV. Her mom tells her it’s time to go, or else, and she manages to catch the bus to school before it’s too late. It’s while riding the bus that you’ll see that Jess can select from different dialogue options when she’s interacting with other characters, which will play into how the story develops. 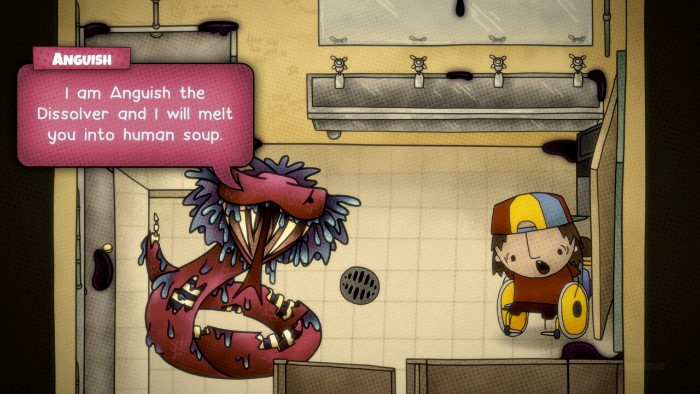 Before you being your adventure, you can select between playing the game in Story Mode or in Challenge Mode. For Story Mode, you will start card battles with more food than your opponent (more on this in a bit), and you’ll be able to skip main storyline battles if you’re having a hard time completing them. For Challenge Mode you will start card battles with the food as your opponent, and you won’t be able to skip any of the main storyline battles, so if you run into one that is giving you trouble, you’re going to have to find the right tactics to beat your opponent. The good news is that you can change the difficulty at any time.


You can move around with the left analog stick, and you can also use the D-Pad. You’re going to be thrown into a gameplay tutorial a few minutes after starting the game since you need to learn the card game that will be used as the main gameplay mechanic for Cardpocalypse. The card game is called Mega Mutant Power Pets, and it’s based on the TV show that Jess was watching at home during the story’s intro segment. It turns out the game is very popular at school, and since she’s only ever seen the Mega Mutant Power Pets show, she’s going to have to learn fast to survive at her new school. 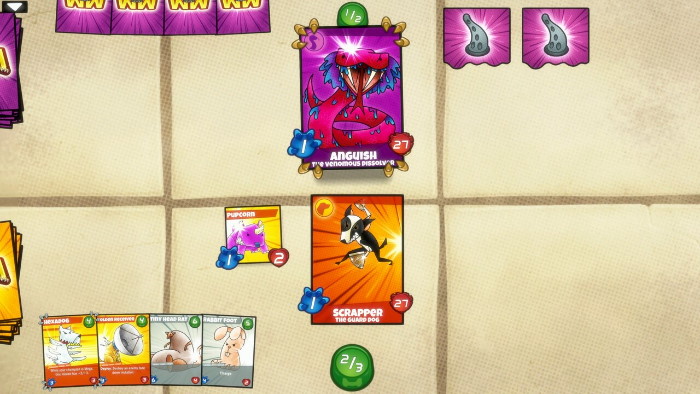 
Another component of the card battles is the food you have. You will start a match with one food (unless you’ve decided to play in Story Mode), and your food will go up by one with every turn you take. Food is important since it’s used to play cards from your hand. You should not be afraid to use your pet food since it will be refilled to the max total displayed on the token at the bottom center of the screen – it’s a green token you really can’t miss. Minions are pets that are not the main Champion for the match, and they will also have health and attack stats for you to consider. Once a minion’s health is reduced to zero, it will be destroyed and removed from the match. Some minions might even have a special ability, so be sure to put them to good use! 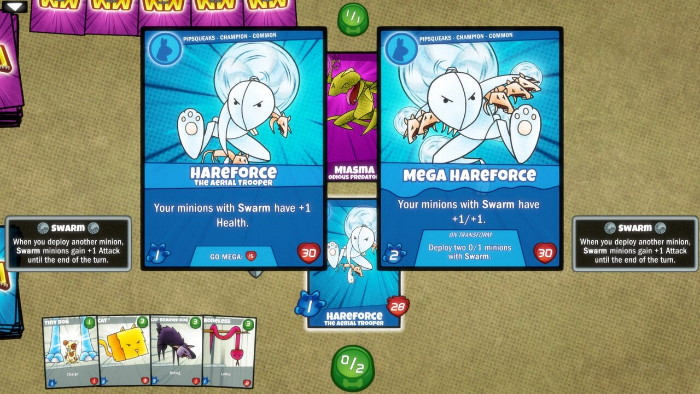 At the start of your turn, you will draw a new card to your hand, but do you need to keep in mind that any minion card you have put into play by spending the required amount of food will not be able to attack during the same turn it’s deployed, so you better be ready with a plan or else your minion might be defeated before you even get a chance to use it! You will need to make good use of your minions and their abilities, as well as of your Champion’s abilities, to become victorious.


Something else that you need to know is that your Champion can turn into a Mega form when its health has been reduced to 15 in total or less. Once a Champion has gone into its Mega form, it will usually have a special ability that will go into effect when it transforms, helping you set up a comeback so that you can still have a shot at beating your opponent. You do need to be careful since your opponent’s Champion will also have a special ability that will be triggered when it goes Mega, so be ready to counter this. 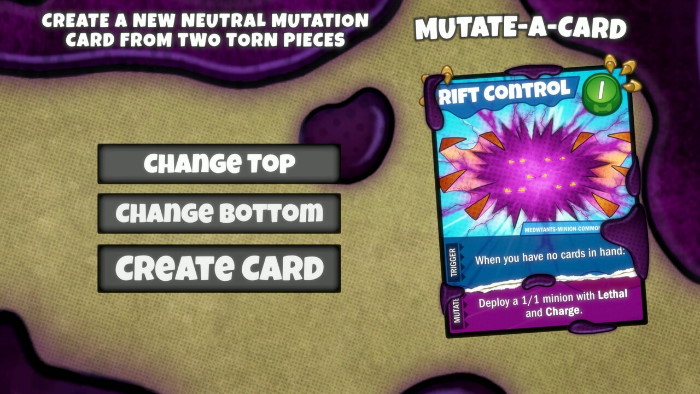 Add mutations into the mix, which are powerful cards you can play to boost your minions or to bluff your way towards victory, and you have an interesting card-based battle system that is a lot of fun to play. Mutations need to be triggered to go into effect, so be sure to examine a mutation card with the Y button so that you can see what will trigger it, as well as what its mutation effect will be. Take, for example, Spite Sores. This card will be triggered when you deploy a minion that costs five food or more, and what it will do is double that minion’s attack, which will certainly be handy in battle!

Since card battles are a big part of Cardpocalypse, you’re going to need to boost your card collection to have as many options as possible. You can get new cards from winning battles, from progressing through the game’s story, and from the quintessential 1990s playground activity: trading! There are four factions in Mega Mutant Power Pets: Wolfians, Sinissers, Pipsqueaks, and Meowtants. For each deck that you build, you will need to have one Champion card, which dictates the deck’s faction, as well as 20 cards either from that Champion’s faction or that are neutral cards – they’re the grey ones. You can build more than one deck so that you can pick the best one for each battle. 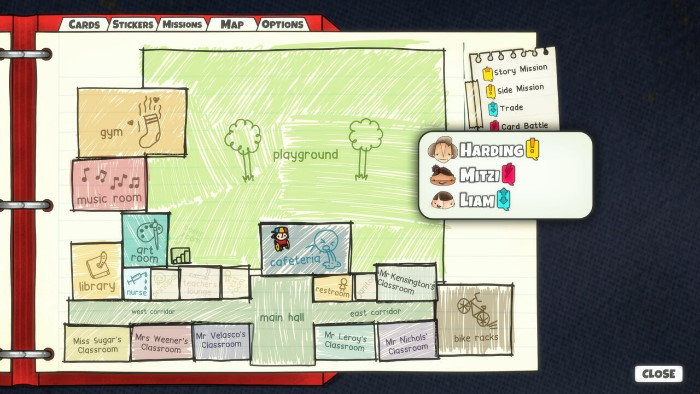 Cardpocalypse is a solid RPG with a great card-based battle system that will keep you coming back for more and more. There are a ton of cards for you to collect, many main quests and side-quests to complete, and a mutant invasion to stop. Do you have what it takes to stop the mega mutants that have started to show up at school while you try to continue playing the Mega Mutant Power Pets card game even though it has been banned by the Principal? Cardpocalypse is now available on Nintendo Switch, and it’s well worth the

Disclaimer
This Cardpocalypse review is based on a Nintendo Switch copy provided by Versus Evil.

SuperEpic: The Entertainment War Out Today