Are you ready to take on running your own pharmaceutical conglomerate? Can you hit it big and make millions? Learn more in our Big Pharma review!


In Big Pharma from Positech Games and Klabater, you will be in charge of running a pharmaceutical conglomerate as you try to find the right balance between keeping a profitable business in place while also researching potential cures for the diseases which are threatening the wellbeing of all people around the world. You’ll search all over the globe for the right ingredients for your operation, checking out any potential side effects each drug might have and taking that into consideration as you set up a production line for said new potential med – all while keeping your bottom line in mind. 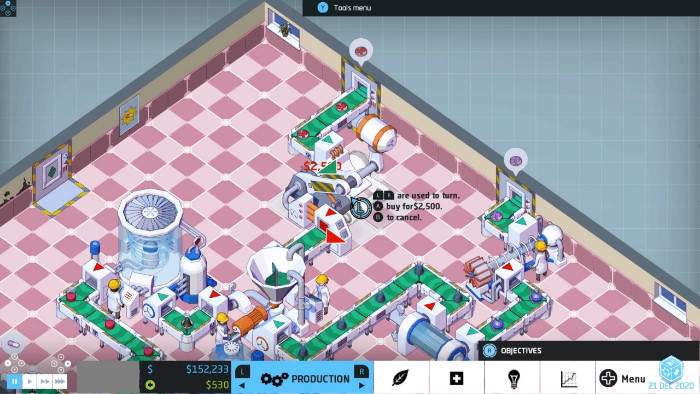 There are different options for taking on this particular simulator. You could get going at the Beginner difficulty in which the map is 2×2, you have the one competitor, and you get a good $50,000 as your starting cash, with different objectives to complete such as getting a total of a million dollars in revenue over a ten year period, or supplying 300 appetite suppressant treatments within eight years. The Intermediate and Advanced difficulty settings make the map bigger while also increasing the number of competitors, and the objectives to complete will, of course, be more challenging.


You will also have some additional options with a Quick Start setup in which you will commence your run with some additional basic technologies unlocked, as well as three ingredients for you to use. You could also take on the Crippling Debt challenge in which you will start with a bigger chunk of cash for your research and other operations, but you will also have to cover a ratter substantial loan within a short period of time. There’s Room to Maneuver in which plots are half the price but have fewer sockets. And you could also dive into Full Unlock in which you start with all machines already unlocked, only one competitor to worry about, and $150,000 in starting cash. 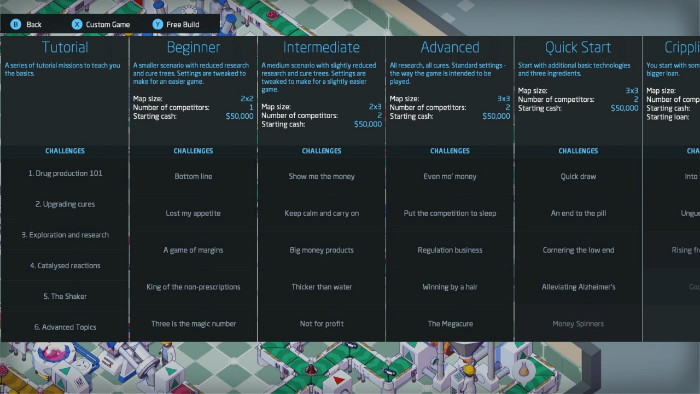 But before you take on any of the other options, I do suggest that you first take on the game’s tutorial so that you can learn the basics, or else you won’t understand what you’re actually dealing with. You will move an on-screen cursor with the left analog stick, zooming in and out with the ZL and ZR buttons as needed. It is here that the game will show you a step by step guide to how you can produce new meds, establishing proper production lines for it, expanding your factory, and procuring new technologies. As expected, all of this costs money, so you’ll need to balance your spending with the potential profit you’re aiming to earn.


As mentioned before, side effects are very much a thing for the meds you’ll be creating, so you’ll need to take into consideration the desired effects (displayed in green text) and the adverse effects (displayed in red text), to value if the side effects – and the overall cost of manufacturing said drug – are worth the effort. For many potential reasons, a painkiller is a very important part of lots of people’s day to day, so while having one that works and is, say, fast-acting, having it also induce a lot of nausea for the rest of the day might not be worth it for your customers. 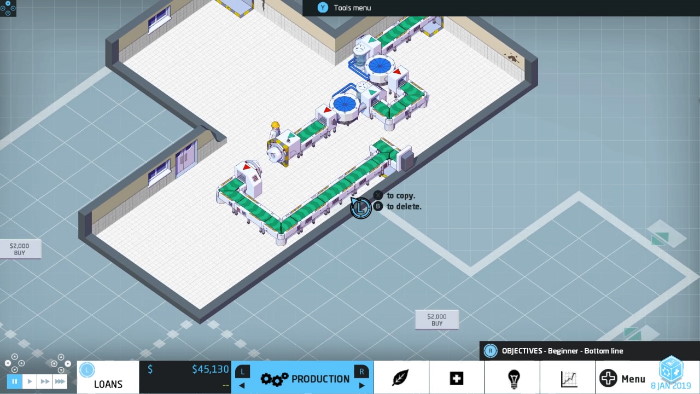 You will also learn about an ingredient’s concentration, and how to reach each of the desired effects, you need for the new medicine you might need to bump up the concentration a bit. It is here that evaporators enter the scene. Taking an ingredient through an evaporator by way of a conveyor belt will allow you to increase its overall concentration. But what happens next once you have the right concentration for that particular ingredient? Well, you’ll need to take it through a pill printer so that you can actually present it in a form that consumers can use. Once you’ve taken care of this, the final step will be to send it through the terminal on the wall so that it can be prepared for shipping.


Speaking of ingredients, getting new ones for your pharmaceutical conglomerate will prove to be a must, so you’ll need to set out on adventures by assigning explorers to find new stuff for you to put to the test. You could, for instance, send a group of explorers to forest areas – which are pretty low hazard locations – so that they can track down a particular beetle that could serve as the ingredient for a new blood medication. You can set how many explorers you want to hire for the job so that you can assign them to each project. You will notice a percentage below the assigned explorer – which will continue to increase – and once it hits 100%, you’ll have a new ingredient to play with. 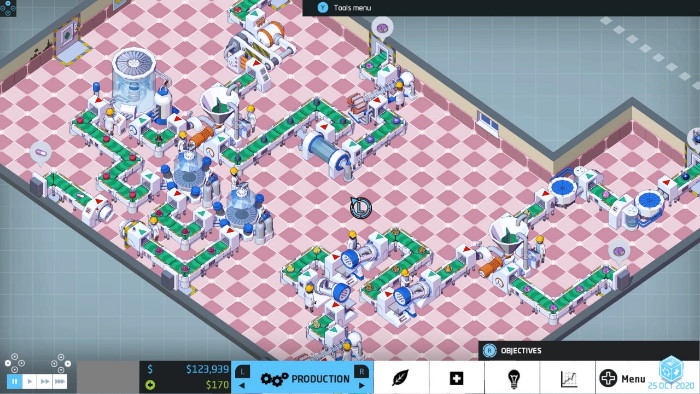 It is then that you’ll need to hire some scientists that can work with the new ingredient as they research how it can be employed. Hiring scientists might also allow you to unlock new machines for your operation, or you could perhaps end up with a new technology that can be applied to your processes. Make sure you don’t hire too many scientists, because there’s a cost for hiring them, as well as a daily cost for their day to day work, and any idle scientists are not going to be very productive for you. 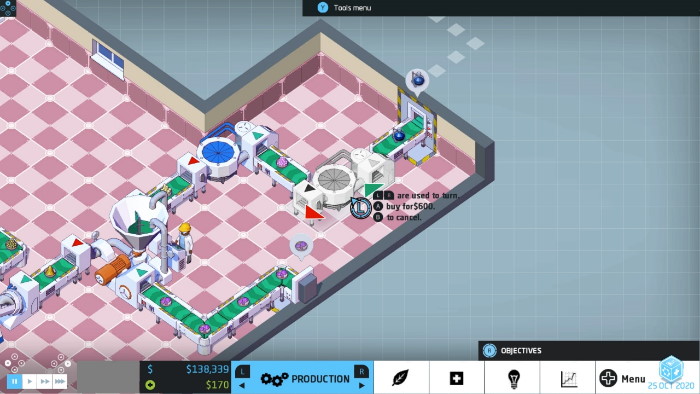 I liked what Big Pharma has to offer on Nintendo Switch since it gave me a chance to experience a streamlined take on the pharmaceutical industry that I enjoyed playing at home in Docked mode as well as in the Tabletop and Portable modes. There’s a lot for you to do in this $29.99 release, but I do want to mention the one complaint I have about the whole experience: the in-game text. Reading it when playing in Tabletop and Portable mode was not an issue since the screen was relatively close to me, but when playing in Docked mode on a large TV, the text forced me to sit very close to the TV to be able to read all the relevant information. Hopefully, the team considers updating the game by way of a patch that addresses the small text, since it’s the one thing that might get in the way of some players’ enjoyment of Big Pharma. 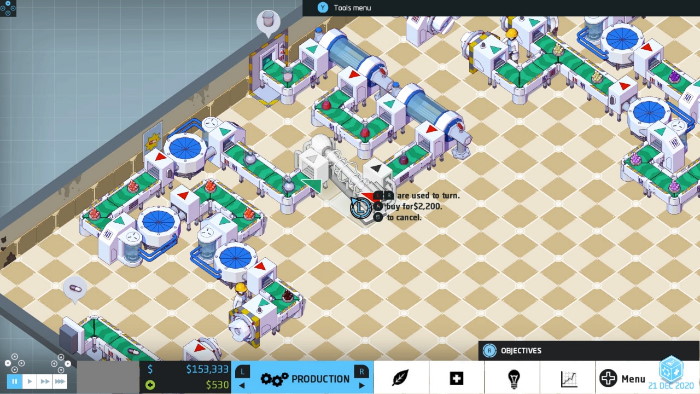 Disclaimer
This Big Pharma review is based on a Nintendo Switch copy provided by Klabater.