Set after the events of the first movie, the game starts with our favorite zombie killing protagonists – Colombus, Wichita, Little Rock, and Tallahassee – in the famous Pacific Playland. After starting a couple of rides just for the fun of it, the four will set out on a road trip to get to the city of Washington because Tallahassee is pretty sure he would make a great president.

The game is played as a top-down twin-stick shooter in a way that reminded me of the great Dead Nation that was released a few years ago. You move around the place with the left analog stick and aim with the right one as you shoot with the R2 button. If you’re in-between moments where zombies try to kill you, you can always reload with the L1 button to make sure you’re fully loaded for the next horde. Other than your gun, you also have explosive weapons to throw like grenades or Molotov cocktails that you can launch with the L2 button. Each character also has a special ability that can be unleashed once your Special Meter is full. For example, Colombus’ ability allows him to move fast while everything around him slows down. 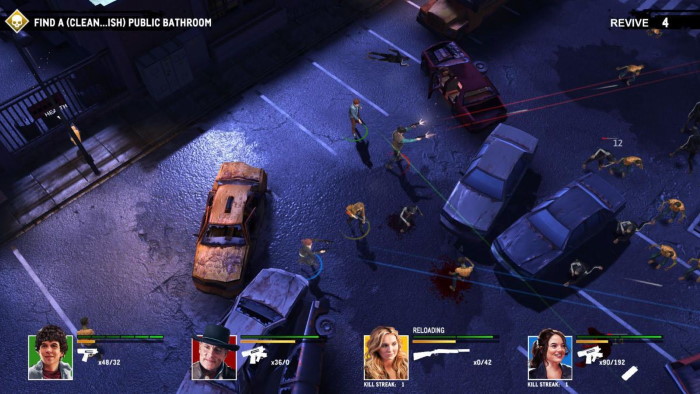 As you progress through the missions the game’s campaign has to offer, you’ll come across car trunks or supermarket fridges that you can interact with by pressing R1 button to open them and pick up weapons with limited ammo or uses. The game has a wide variety of weapons you can find, from an SMG, an AK-47 or the always classic shotgun, to more close range weapons like a katana or a guitar. When you’re out of ammo for any of these, you’ll be back to using your regular pistol.


When you finish a level, you’ll gain a certain number of skill points that you’ll be able to distribute in any of the five following categories: Damage, Ammo, Health, Speed,, and Super (for your special power). Each of those skills can have a maximum number of 10 points allocated, so maxing out a character will require you to replay missions so that you can eventually get there. 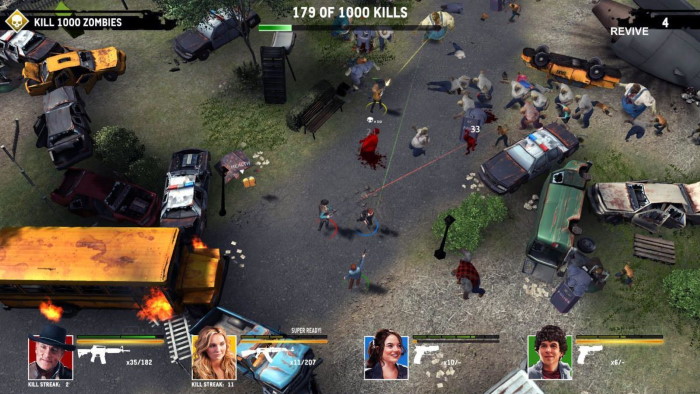 The game’s visual looks very much like the movie. It’s colorful, with a wide variety of zombies like the clown one, or the T-800. It’s also got voice acting from the four actors of the movie, which was certainly a nice and welcomed surprise. I would have liked for the dialogue between characters to be automatic, since having to press the R1 button to move the story forward made what should have been some fun conversations feel a bit stilted and forced.


Being a huge fan of the Zombieland movie, I expected nothing but awesomeness with this game. I’m here to say that, yes, the game is pretty awesome because it really feels as if you’re right there in the world built by the artists for the Zombieland movie universe. And every now and then, you get some friendly reminders about the different “rules” (like the cardio one) that are heavilty featured in the movies, so it really does feel like an extension of the universe presented in the movies. 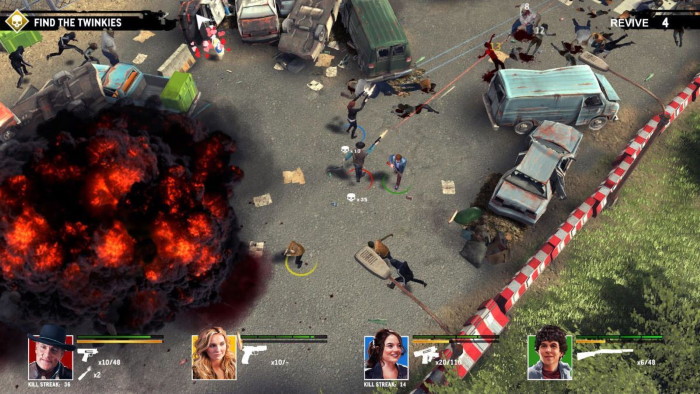 But if I put aside the fan part of me, the game lacks a few things to be a great game. First of all, it’s really very short. You’ll likely get through the ten missions the game has to offer in around three hours or so. Sure, there are a few side missions you can complete, but it won’t suddenly double your time with the game. This could be something that’s acceptable if it wasn’t for the price tag. No matter how much I love a game, I find it hard to recommend paying $40 for something that short. There is also the Horde mode you can play as you try to survive wave after wave of zombies, and you can also play in local co-op with friends, so your mileage may vary.

On the trophies side, this should be an easy one to get the Platinum for since lots of the trophies will be achieved just from playing the game from start to finsih. There’s a time-based trophy that asks you to finish the campaign i a little bit under 6 hours that, at first, might seem frightening, but it’s honestly very easy to complete. Other than that, as long as you got some extra controllers handy, you can play a co-op game with all four main characters present as you hear that lovely “trophy unlocked” chime play. 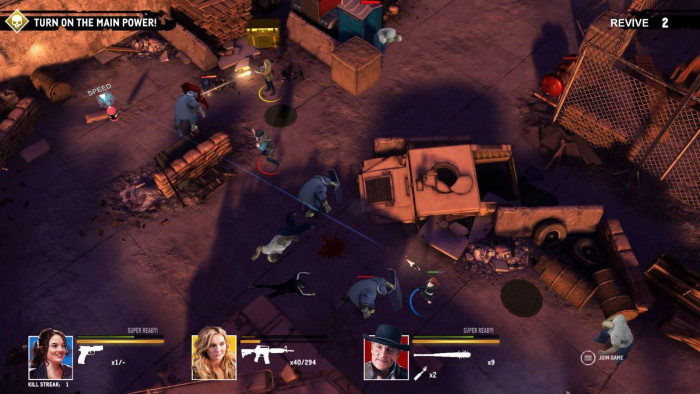 Final Thoughts
If you’re a fan of the movie franchise, then Zombieland: Double Tap – Road Trip is definitely a must-play. If you’re not, you might still get some enjoyment out of the game, but it is a short experience. There are a few technical issues here and there, but nothing that will prevent you from having fun while playing it. The only thing that stands between you and all those zombies is the price tag, but it might not be a deal-breaker for you.

Disclaimer
This Zombieland: Double Tap – Road Trip review is based on a PlayStation 4 copy provided by GameMill Entertainment.

Say No! More On Its Way To Nintendo Switch