In Stay Cool, Kobayashi-San!: A River City Ransom Story, you will take on a side-story for the titular character, who was actually a boss for the first game in the series. Having said that, the setup for this particular beat ‘em up is… pretty out there! You will take on a story with a bit of a sci-fi twist – in single-player or local two-player co-op – since there’s a character, Kouki Mizoguchi, who comes from the future and is here to warn all about dangerous invaders that are time traveling to attack. 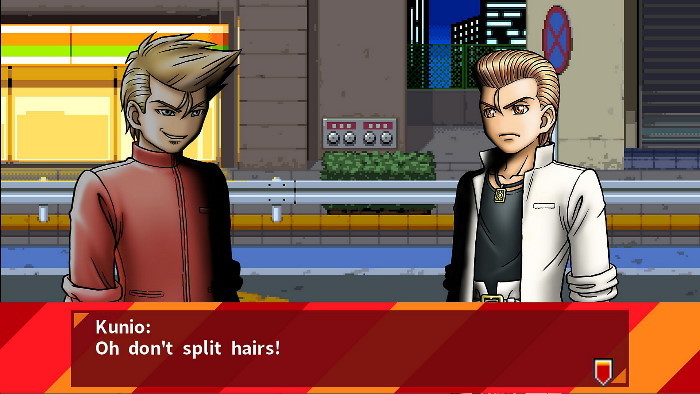 Once you’ve entered the name of the special character who will be abducted at the start of the game – with up to 12 letters -, and select between a male or female option, you’ll have to pick between two emotions: friendship or love. The next step is to pick three goods from a list of options that will have memories tied to Kobayashi. What this does is affect which items might be dropped by special enemies when defeated. When you’ve done all this, just confirm your selections so that the game proper can begin.


You can move your character around with the left analog stick or the D-Pad, walking around each area as you use the Triangle button to jump to avoid your enemies’ or to set up an aerial attack. The Circle button is for your regular attacks, making this the button you’re going to be using the most during your time with Stay Cool, Kobayashi-San!: A River City Ransom Story. Your special is mapped to the X button, and it should be reserved for times when you’re feeling overwhelmed by all the opponents around you, as it will use up some of your spirit energy. The L1 button is for calling your ally into action. Items can be used with the Square button. The R1 button is for switching the character you’re controlling. 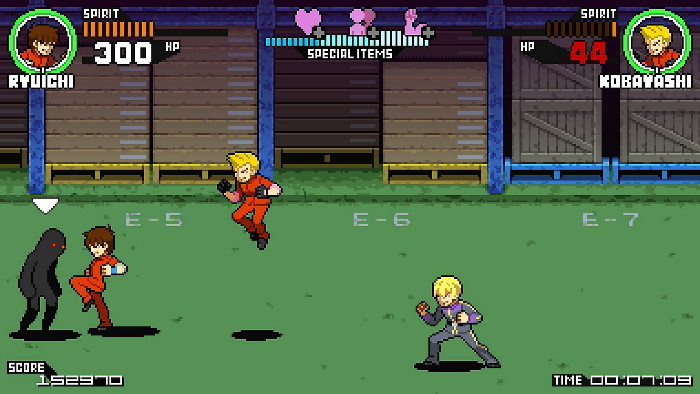 To be able to take on the special bosses, you’ll first need to defeat thirty of an enemy type before the boss leader shows up. Some of the colored enemies are going to show up more in particular areas, so if you’re aiming at taking down a particular boss leader, pay attention to what color group you need to defeat. There are five colors in total for these Power Ranger low ranking enemy wannabes, so once you’ve taken out a color, you’ll be able to focus on the remaining groups.


The game features voice acting in Japanese, with English text so that you can follow along. This is a common practice since it makes it possible for more games to be released while keeping overall costs lower since voice acting is more expensive than text localization. It’s how something like the Yakuza series making its way over here became a possibility since with all of the dialogue in that series, doing voice over in English on top of the already recorded Japanese voice over work would have been too expensive. 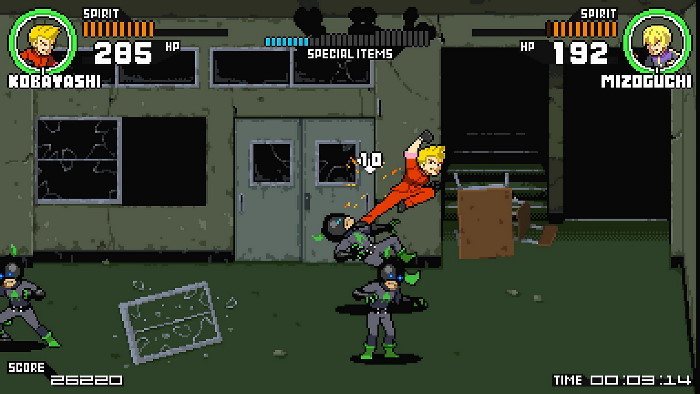 You can unlock different allies as you progress through the game, which can learn new skills and power-ups when you take over them. These skills require you use stars, which you will obtain when you beat the game based on your performance. You need to pay attention because every skill that you unlock is permanent, and you can’t just re-roll a character to try and take them down another path. You can go into the options menu to learn more about each of the different characters you can end up playing as.


Each one will have a short profile blurb to give you an idea of who they are, their total hit points and spirit points, the next power-up they can get, and a list of hidden skills to unlock. As to not spoil things, I’ll talk only about main character Masao Kobayashi. His profile states he’s a third-year student over at Reino High Schol. He’s had an upper-class upbringing, which has made him a bit of a prideful person. He was the leader of the Big Four over at Reino High School. As for his power-ups, it’s toughness, which boosts his hit points and other stats, and it costs two stars to unlock. 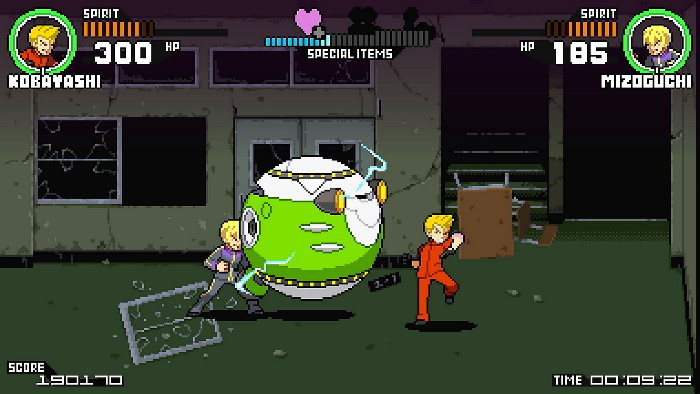 The game will give you three items at the start of your first run, but there are more you can unlock. As was the case for the character skills, you will need to spend the stars you get from beating the game to unlock new items for subsequent runs. The three items you start with are for recovering 100 hit points, for summoning Ryuchi Hattori as an ally, and a level 1 power-up booster that will, for a limited time, improve your character’s attack and speed stats so that you can wreak havoc. To be able to use your equipped items, you’ll need to fill up the meter at the upper center of the screen by defeating opponents. 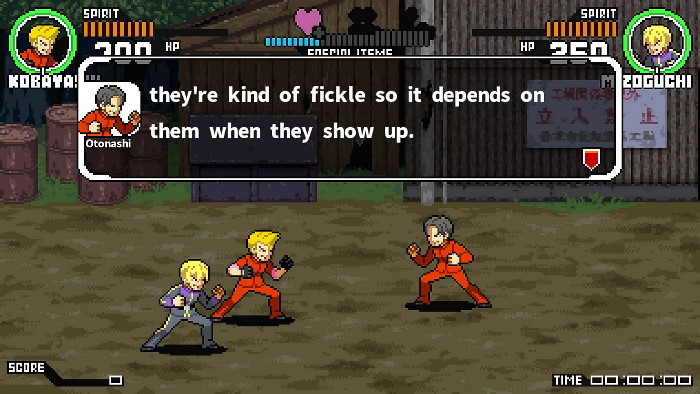 Stay Cool, Kobayashi-San!: A River City Ransom Story is a fun short and to the point beat ‘em up that pays homage to the long-running franchise it springs from while doing its own thing… with a rather bizarre story setup. But when you remember that the series actually has an RPG spin-off – which is also a very fun option. With multiple endings to unlock based on your decisions and actions, the game offers a lot of replay value. But if you’re not a fan of beat ‘em ups, and don’t like replaying games many times, then this one is not going to win you over. It’s a budget release at $13.99, and for that price, it definitely has something to offer.

Disclaimer
This Stay Cool, Kobayashi-San!: A River City Ransom Story review is based on a PlayStation 4 copy provided by Arc System Works.

Narcos: Rise of the Cartels Out Next Week