Hard-as-nails dungeon crawlers are becoming a big part of their genre, with games such as Darkest Dungeon, bringing us some memorable experiences. Mistover is by far, one of the better ones. Find out why in our Mistover review!

MIST-ical RPG with expeditions for finding the key to survival. Choose your next step wisely and keep in mind that your every move will change the future.


Created by Krafton Inc, Mistover tells the story of a group of adventurers set upon by some monsters. When rescued by guards and taken to a nearby town – or to be more accurate, the only town left – you learn that the mist, called “The Pillar of Despair,” comes from another dimension, and it has fallen upon the land, consuming the world. A literal doomsday clock is counting down to the end of the world, and the only ones who can stop it are a band of randomly generated misfits who must kill monsters, collect treasure, and generally do what they can to delay the inevitable.

The aforementioned town acts as your main hub where you can recruit new members to your team, buy supplies, obtain quests, improve equipment, and outfit your current lineup of fighters. From here, you can also venture out into the different zones the world has to offer, as well as the different areas within each particular zone. 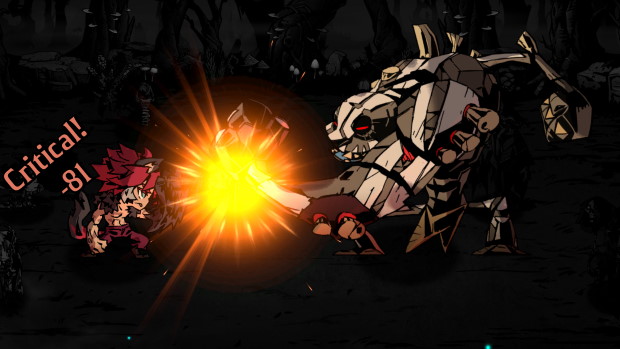 Every area is a randomly generated dungeon that your team must navigate their way through sufficiently, fight enough monsters, discover enough treasures, watching in dismay as the doomsday clock ticks closer to the end of the world. Before your team goes in for their next expedition, you are encouraged to organize your lineup, your equipment, and your consumables because once you go in, you won’t be able to change any of it.

Don’t be fooled by the presentation style, since Mistover wants you to know it is a hard game and will not hesitate to punish you for your mistakes. The dissonance between the cutesy chibi, giant eyed cartoonish art style of the characters, and the world is disconcerting when placed alongside the overbearing and punishing combat style. I recommend everyone tries the game on its easiest difficulty first until they have a clear understanding of its true nuances before attempting to go at it on the harder difficulties, or else. 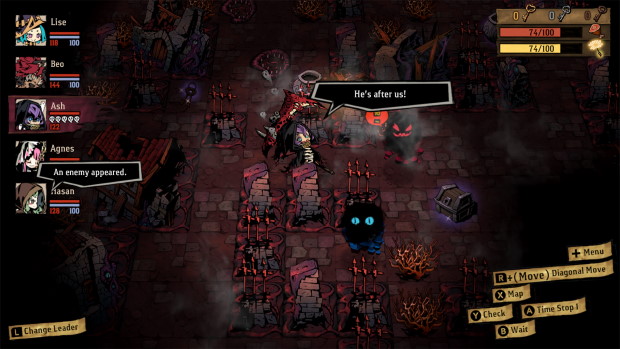 The game does not wait to get into combat, and if you came here expecting to find an exact replica of Darkest Dungeon, newcomers will be in for a rude awakening. Before we touch upon the combat,
I wanted to mention how the dungeon system is interesting in its own right. You are free to navigate as you please on a one step at a time basis, keeping an eye on your health, your hunger meter – which affects how much health you regain in between each step -, and Luminosity, which affects how much of your immediate surroundings you can see at any given moment.

With each step you take, the monsters of the dungeon also take a step, meaning you can have an encounter when it is least convenient. The dungeon system is simple enough but complemented by its combat system. There is a lot of content in the combat system to wrap your head around, so there is a tutorial at the start of the game to introduce you to it. You’ll need to pay attention since it could get a bit confusing, and nothing beats actually learning as you go with the more battles you take on.

For games in this genre, your team of fighters is on the left with the enemy combatants on the right, but Mistover uses a 3×3 grid for each side. Fighters can move to or be forced to move anywhere on their grid one step at a time. How you position your team will not only affect the bonuses they get during fights but also which moves they are able to do, even unlocking some special moves if you line up team members just right. 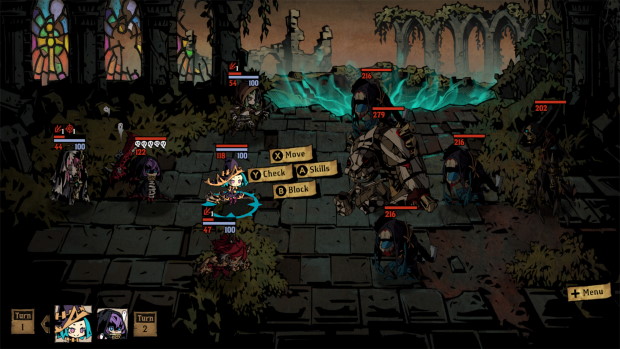 The composition of your team members and their placement on their grid is vital as placing certain classes around each other unlocks bonus abilities. Depending on your playing style, you may discover some abilities that completely change the way you play Mistover. The game does not allow you to choose one team and rest on your laurels. In keeping with its brutal style, when a teammate’s HP goes down to zero, they enter an endangered state. They’re still able to fight but must be cured quickly to remove them from that state cause if they’re damaged any further, they are dead and for good.

In addition, should your team become too powerful for a zone, you start to be penalized, thereby encouraging you to always keep moving forward. But this does not make the lower levels become obsolete either as there are certain crafting items that can only be gained from lower levels dungeons, so in order to do that, it is best to constantly keep creating low-level teams to go deep diving into lower level dungeons. 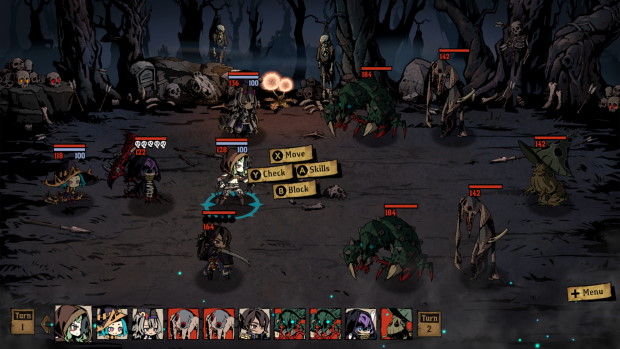 The visuals are excellent, character and monster designs are beautifully detailed, with the dungeons given enough elements to make each one unique, but the presentation is let down by the sound. The game only features Japanese voice acting, and whilst the voice acting is good, it is a little strange that it is featured on the menu screen as an unchangeable option. The voice work is even more annoying when certain phrases begin to get repeated literally every other second with no need for this to happen.

Another minor niggle is the game’s desire to go a little overboard with its genre leanings. Even though I have sunk a considerable number of hours into the game, I have yet to discover why my healer will sometimes be inflicted by the “bleeding” status effect when casting healing spells on the team or why the Paladin is choosing to block instead of attack or vice versa. It has nothing to do with the character traits that characters can get when they level up or the spells themselves, it just seems to be an unfair disadvantage thrown at you on a whim just to keep you on your toes. With all of that said, this game is a fun endeavor if you’re up for a challenge.

Disclaimer
This Mistover review is based on a PlayStation 4 copy provided by Krafton.