In this combat racing game from Gamepires and Iceberg Interactive, your journey will begin when Happy Smokes comes knocking at your door, aiming to sponsor you. It turns out their driver has been temporally held at the police station on suspicion of consuming illegal substances, and since they need a new driver ASAP, you’re the best option they have. Since they’re offering to pay you $1,500, as well as let you keep the prize money if you end up winning the race, it’s a win-win opportunity that you just can’t pass up. You’ll start with a standard vehicle with balanced but low stats, and will have to your way to the top. 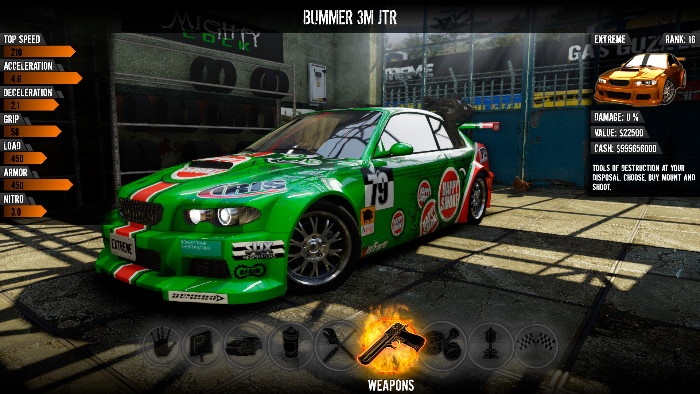 You’ll be steering your car with the left analog stick, honking as needed by pressing down on the stick, accelerating with the R2 button, breaking – or going in reverse – by pressing the L2 button. The right analog stick can be used to look left, right, or to look behind you, as well as for changing the camera view by pressing in on the stick. If you press the right analog stick down, you’ll switch to the next weapon for your vehicle. You can use your weapons with the Square button, firing them behind you by pressing the Circle button. If you have a power-up, this can be activated with the Triangle button. You also have a nitro boost that you can use with the X button, as long as you have enough of a charge. 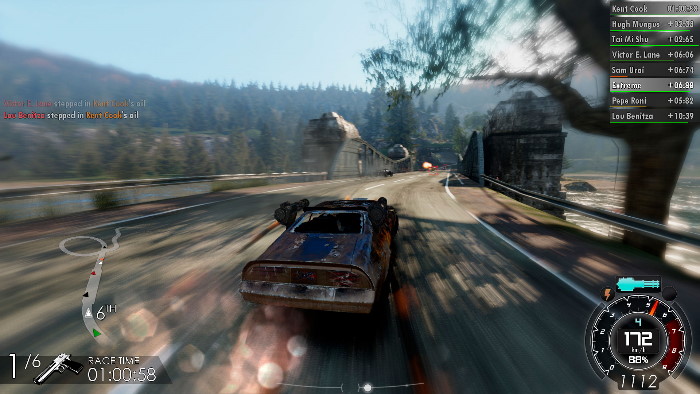 The money you earn can be put to good use in your garage. It is there that you will be able to purchase new cars, repair any damage sustained during a race, change the paint job of your vehicle, and more. You can also upgrade your car’s parts as well as buy new weapons you can use in battle to gain the upper hand. Each car will have a specific set of stats, so the more expensive a car, the better it’s stock stats will be. These stats include its top speed, acceleration, deceleration, grip, load, armor, and nitro boost potential. As for the upgrades, you can boost your car’s engine, brakes, tires, ammo, and armor 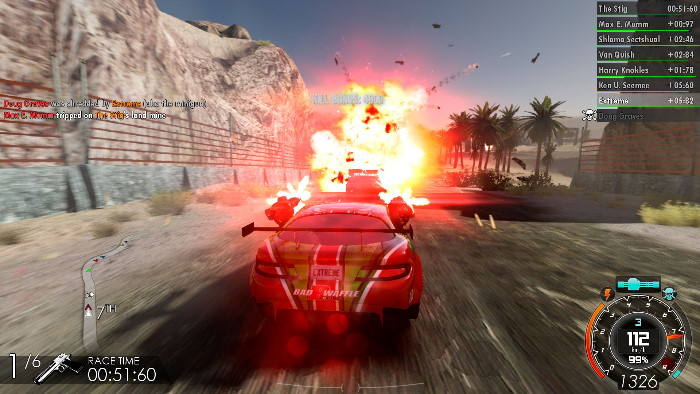 You’ll start all the way at the bottom of the rank list on the 16th place, and will need to work your way up by winning races and destroying your opponents on the track. To do this, you will take on Battle Races in which anything goes, Power Races in which you can’t use any weapons, so you’ll be going at it in a classic racing setup, as well as other variants like Deathmatch, Last Man Standing, and more. Along with the “win the race” objective, there are also bonus objectives you can complete in a race to gain some extra cash on the side, which will certainly be helpful. 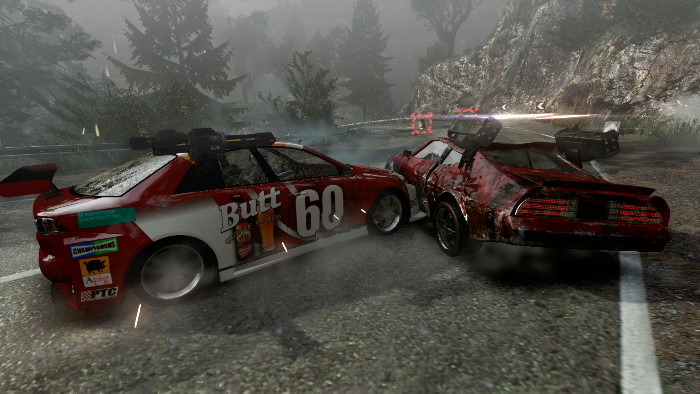 On top of the main game, the PlayStation 4 version of Gas Guzzlers Extreme also includes the Full Metal Frenzy and Full Metal Zombie DLC at no extra cost. The Full Metal Frenzy DLC adds two new arenas, two new cars, a female announcer for races, two power-ups (Invisibility, which has a Predator feel to it, and Stun Grenades), as well as the Dominator Destruction Derby, and Domination Derby game modes. Full Metal Zombie is a separate mode that feels like a bonus game since it has you racing around areas as you fight against 22 different types of zombies in a new city map. You’ll need to use your car’s ramming power as well as the different weapons and power-ups at your disposal to survive the zombie onslaught! 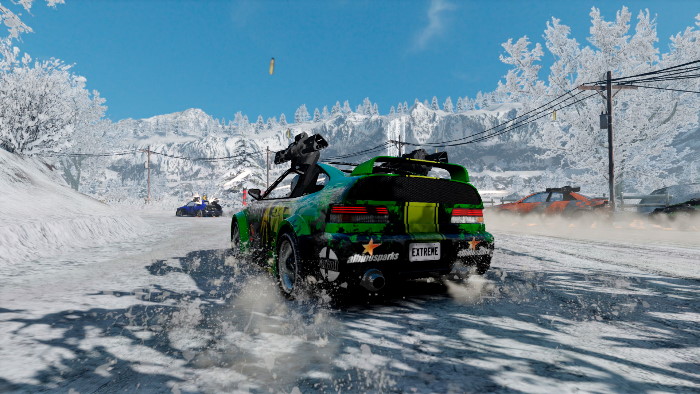 Gas Guzzlers Extremes has a full trophy list with a Platinum trophy, and it’s going to be a long run for you to add it to your collection! There’s one set of ten trophies tied to the zombie mode, and you will get one trophy for every wave you manage to survive, up to wave ten. On top of that, there are other trophies related to the zombie mode for killing 15,000 human zombies, 1,000 fat human zombies, and 800 hyenas. The rest of the trophies are for winning a ton of races and completing each tournament, and for killing your opponents many times with each of the weapons you can purchase. Do all that and run over one hundred animals in any game mode, and you’ll have a new Platinum for your collection! 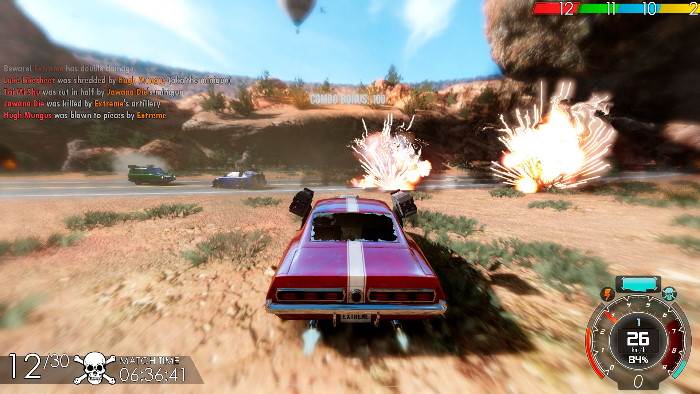 Gas Guzzlers Extreme is a fun combat racing game available at a budget price, offering a ton of content and many gameplay modes. With 42 tracks, 12 arenas, more than a dozen different weapons, 21 customizable cars, more than a dozen upgrades, multiple paths to take through each track, and even a zombie apocalypse mode, Gas Guzzlers Extreme certainly has something for everyone. It’s not going to set the world on fire, but it’s a $19.99 game that is a good option for combat racing aficionados.

Disclaimer
This Gas Guzzlers Extreme review is based on a PlayStation 4 copy provided by Iceberg Interactive.