This is a double review for The Bradwell Conspiracy. Ceidz and ThaRaven403 played the game, and this review presents what they both had to say.


You wake up, disoriented – your throat ragged and raw. Engulfed by smoke, the ceiling continues to collapse all around. You desperately try to recall what happened; Stonehenge… Bradwell Electronics… AN EXPLOSION! Suddenly, you remember – it’s imperative you escape! …but how?!

The story of The Bradwell Conspiracy starts with you waking up in the Bradwell Stonehenge Museum after an explosion caused great damage to the place. With severe damage to your vocal cords because of the smoke, you are unable to speak, but luckily you have some Bradwell Guide Glasses on you that serve as AI-powered glasses that can help you out. You eventually connect with Amber, who wants to exit the place as much as you do, so the two of you will work together to try to get out.

You’ll be trying to leave the place from a first-person perspective, occasionally solving some puzzles to move a bit closer to the exit. Since your glasses are connected with Amber, you’ll be able to communicate with her by sending photos so she can help you. For example, sending her a picture of an opened gate so that she can close it to allow you to cross over it, or so that she can tell you more about the area you’re currently in. 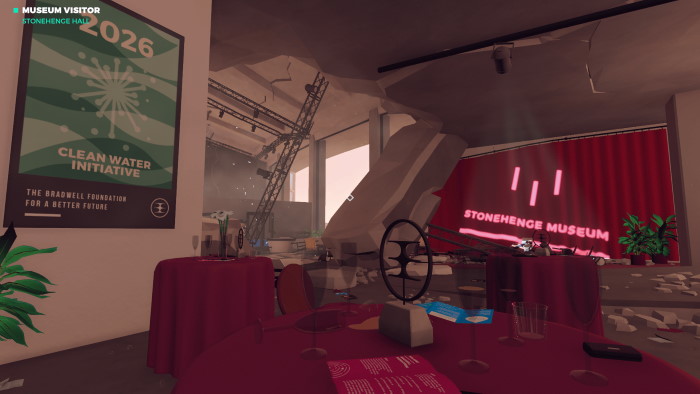 You’ll also work with your SMP, a gadget that’s basically an object scanner and 3D printer all-in-one. By scanning specific objects with Square, you’ll gather its blueprints so that you can reprint it anywhere you want, so long as you have substance to create it. Substance is gathered from the objects you scan or from certain material bricks lying around. Most of the puzzles will require you to find every material that can be scanned so that you have enough substance to print what’s required in order to progress.

When you start the game with the whole place crumbled down, without knowing why, it’s easy to think you’ll be in a thrilling story, especially with the word conspiracy in the game’s title. Unfortunately, the vast majority of the game is all about getting out of the place, and only late in the game does the conspiracy part comes in. There are a few emails and audio logs that can get you started on the whole conspiracy idea while playing, but there isn’t a lot, and since they are not mandatory to progress, you could easily miss them – and the whole point of the story.

As for the puzzles, most of them were easily completed, making the game less than challenging except for the end game part, where I saw a huge spike compared to the rest. The whole idea of scanning objects to be able to print them back somewhere else is a really cool concept, but I don’t think they’ve used all the potential of the idea in this game. I also encountered a few issues where sending pictures wouldn’t trigger things with Amber, so I had to restart the game to get things moving. 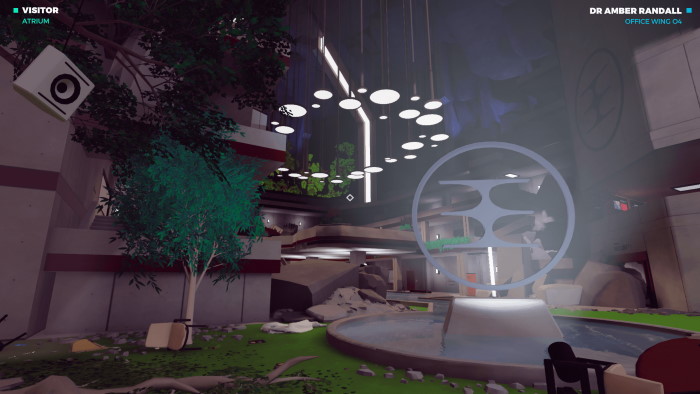 As for the trophies, this should be an easy Platinum to get! The majority of the trophies come from playing the game, and then there are some trophies for reading all emails, hearing all voice memos, and reading all the books. Since the game is relatively short – at around 3-4 hours – it’s not a huge task to go back for another playthrough if you missed some of the collectibles on your first run.

Soon after that, and due to the smoke caused by the explosion, our main character is unable to talk. Luckily, he soon meets up with Amber, another survivor of the explosion, and while they can’t communicate with voice, they communicate by other means. By sending pictures to Amber – who’s very knowledgeable of the museum – she helps us get through the different roadblocks / light puzzles. 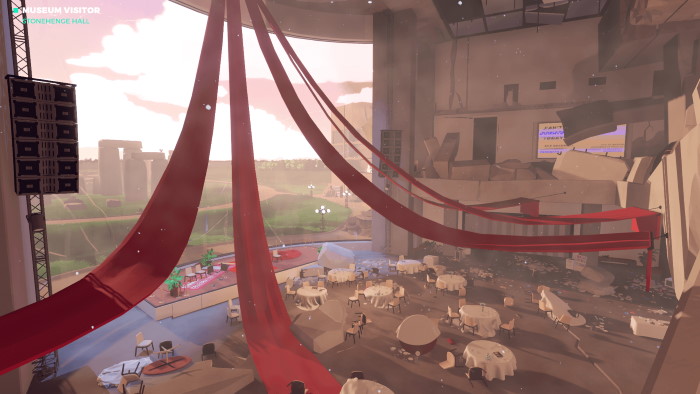 I loved how the Smart Glasses are presented in the story. Without even being a “character,” this AI analyses the character and the different environments we are in and helps the main character get knowledge in the center. The AI can also reply to the questions asked by Amber, and it was downright hilarious – and actually made me chuckle. The voice acting in The Bradwell Conspiracy for the Smart Glasses / AI system and for Amber, were, by far, the definitive highlight of the game.

Since the main character doesn’t talk, and either Amber or the AI are talking most of the time, this game was slightly reminiscent of the excellent Firewatch, in which the main character talks a little, but the other character in the story, your boss Delilah, is almost always the one doing the talking. In The Bradwell Conspiracy, Amber talks a lot during cutscenes, as well as for every photo you send to her, even if it’s a photo of something that won’t be useful for you.


As for the presentation, the level design is good, but I found myself lost at times and needed a guide to help me find what I was missing to progress. The museum is well-rendered, and you’ll explore it in great lengths as you progress through the campaign. The Bradwell Conspiracy runs at 60 frames per second when in small spaces, but drops below fluidity level when there is a lot of stuff and particles shown on screen, on a standard PlayStation 4. I liked exploring the museum in The Bradwell Conspiracy, but what got me the most was the fantastic voice acting. 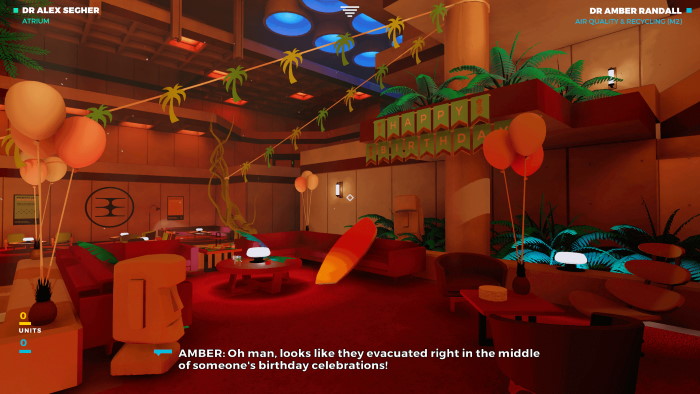 Final Thoughts
Even though our short time with the game was relatively fun, we felt as if the game missed the point of its title. It has good concepts for a first-person puzzle game, but doesn’t do much on the conspiracy thing, so it becomes a large escape room with some easy to solve puzzles.

Disclaimer
This The Bradwell Conspiracy review is based on PlayStation 4 copies provided by Bossa Studios.