When I was offered the chance to review the Baldur’s Gate Enhanced Edition Pack from Beamdog and Skybound Games, I was more than ready to dive into the two classic and beloved RPG included in this twin-pack: Baldur’s Gate and Baldur’s Gate II. Both games are available right from the start from the main menu, so you can take on them in any order you want. Both games include the original content as well as all DLC, not to mention Baldur’s Gate: Siege of Dragonspear, an all-new expansion developed by Beamdog to bridge both games! You’re basically getting three games for less than the price of one, which is certainly great value. 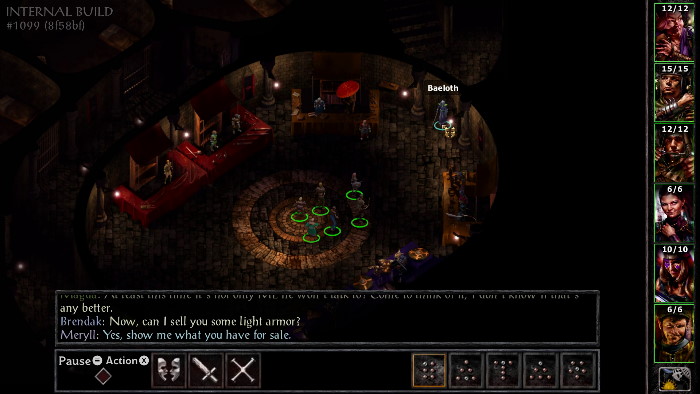 As for the story setup of each of the main adventures included in this massive collection, here are the excerpts that will get you up to speed without spoiling things too much:

For as long as you can remember, your view of the world has been limited to the heavily fortified walls of Candlekeep. Your foster father, Gorion, has done everything in his power to protect you and keep you out of harm’s way.
All of that is about to change. Forced to leave your home under mysterious circumstances, you find yourself drawn into a conflict that has the Sword Coast on the brink of war. An iron shortage of unknown origin threatens to plunge the city of Baldur’s Gate into conflict with Amn. Meanwhile, there is something else at work, far more sinister than you can even begin to fathom.

Kidnapped. Imprisoned. Tortured. The wizard Irenicus holds you captive in his stronghold, attempting to strip you of the powers that are your birthright.
Can you resist the evil within you, forge a legend of heroic proportions, and ultimately destroy the dark essence that haunts your dreams? Or will you embrace your monstrous nature, carve a swath of destruction across the realms, and ascend to godhood as the new Lord of Murder? 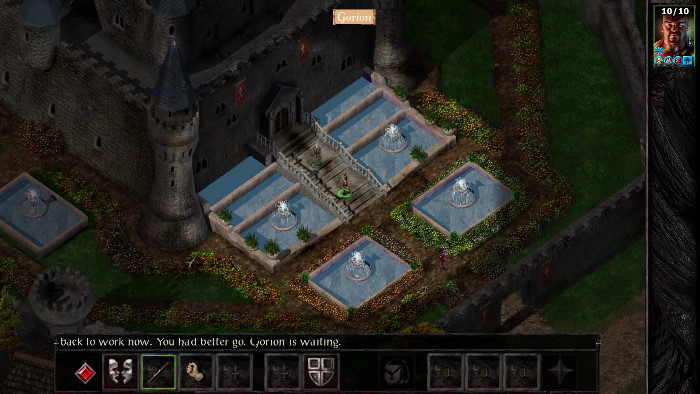 But, what’s the actual content that is included in this $49.99 steal of a package, buckle up, cause it’s a big pair of lists! 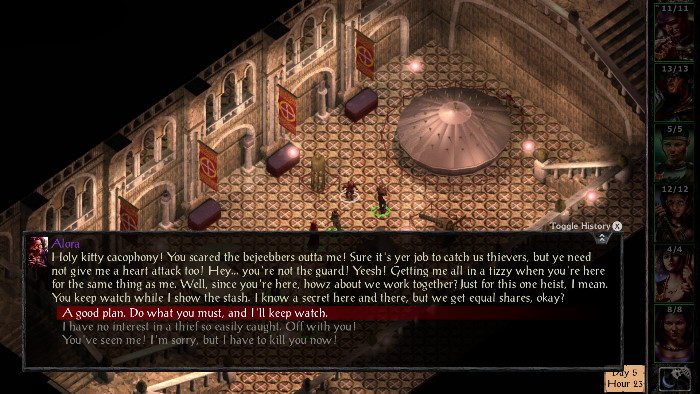 Baldur’s Gate II Enhanced Edition
 Shadows of Amn: Continue the Baldur’s Gate saga in the region of Amn, recruiting allies and vanquishing foes in pursuit of the mad wizard who seeks to rob you of your birthright.
 Throne of Bhaal: Travel to Tethyr in this thrilling conclusion to the Bhaalspawn saga, and delve into the treasure-filled halls of Watcher’s Keep!
 The Black Pits II: Explore the tactical depth of high-level combat in this stand-alone adventure. Undermine your captors and prey upon their weaknesses while you dodge traps and battle for your life against Demi-Liches, Mind Flayers, and Githyanki.
 A Price Paid in Blood: Join the Blackguard Dorn in carving a swath of destruction across the Realms, as he struggles to appease the increasingly bloody demands of his dark patron.
 Fist of the Fallen: Help the Sun Soul Monk Rasaad find peace in his quest for vengeance, and determine the fate of a heretical sect.
 In Defense of the Wild: Protect the innocent and stand with Neera the Wild Mage against a ruthless school of Red Wizards.
 A Voice in the Dark: Recruit the mysterious Thief Hexxat and take up her mission of retrieving long lost artifacts from tombs as far away as Zakhara.
 The Black Pits II – Gladiators of Thay: Explore the tactical depth of high-level Dungeons & Dragons combat. Turn your captors against each other while you dodge traps and battle for your life against Demi-Liches, Mind Flayers, and the legendary Githyanki.
 Gallery of Heroes II: Expand your character collection with these six beautifully painted hero portraits from acclaimed artist Keiren Yanner!
 Easy Multiplayer: Baldur’s Gate II: Enhanced Edition makes it easy to find, list, and join multiplayer games, even while behind a firewall.

Since there’s a ton to learn about these old-school games that have been given a new coat of HD paint, you should take your time before you start your adventures proper by diving into the extensive tutorial. It is here that you will learn about being able to either go with a preset character the game will throw at you, or by going right in and crafting your adventurers. You can select its gender (something that will not affect your character’s attribute, but will impact if an NPC can become romantically interested in you), its appearance from the vast selection of portraits, as well as its race. 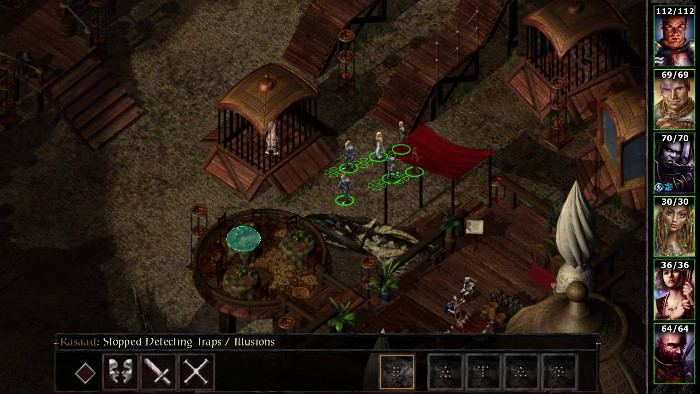 Race will have an impact on what your stats can end up being since some races have more of a knack for having stats that favor a particular character class or two. For example, humans, who are the predominant race, rule most of the land, and are a race that has an interesting advantage since it can dual-class. Dwarves, on the other hand, are short and stocky, and have a nice set of traits, such as a +2 bonus to saving throws vs. paralysis, poison, and death, as well as a +10% to open locks and a +15% to find traps – something that could come in very handy while exploring an area.


And that’s even before talking about the actual classes, their alignment, abilities and skills, appearance, and the name you will give to your character! For classes you could, for example, have a Fighter, Ranger, Paladin, Cleric, Mage, Thief, and more. Your alignment can be lawful good, neutral good, chaotic good, lawful neutral, neutral, chaotic neutral, lawful evil, neutral evil, or chaotic evil, which will affect how your overall run develops. Your abilities will dictate your overall stats in strength, dexterity, constitution, intelligence, wisdom, and charisma. Skills will impact your proficiency with the different weapons you can wield, so choose wisely! 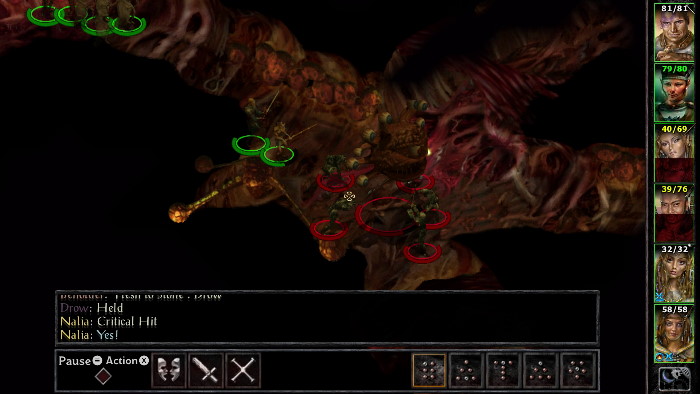 Depending on the type of experience you want to have, you can select from the available difficulty settings to have an easier or harder time surviving the adventure. You can go into Story Mode which makes it so that you can enjoy the game’s story and take on the gameplay at your own pace, since your party members can’t die in combat. You could also go at it on Easy difficulty and gain a +6 to your luck while also facing up against less enemies that deal half damage to you, or go in with Core Rules, which is for veterans who have experience with the Dungeons & Dragons rules and settings. These are not all the difficulty settings, but they should give you an idea of what to expect.


You can adjust different settings to tailor the overall experience to your taste. There is the option of changing the gore presented during combat animations, if you’ll see weather effects while playing – things such as rain, snow, or fog -, if you want to repeatedly cast healing spells on rest until you’ve been fully healed, if you want to change rules a bit by gaining max hit points (HP) when leveling up, if the damage received parameters will be default or if it will be compliant with 2nd Edition Dungeons & Dragons, if characters using a ranged weapon will switch to a melee weapon after their current ammo stock has been depleted, and more. The games also have a much-need accessibility option that allows you to increase the font size, something that is very much needed for a game released in 2019. 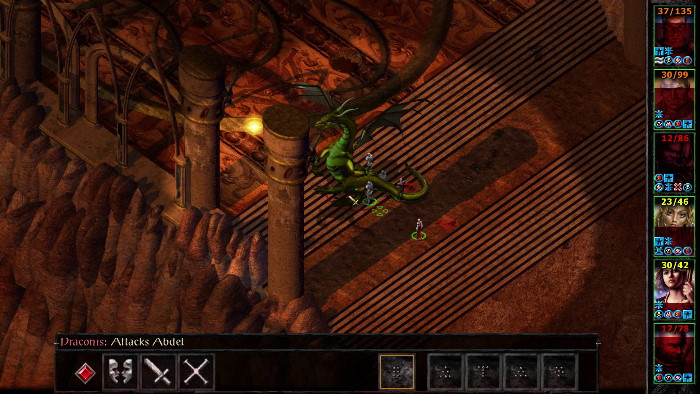 Trophy hunters are in for a treat, since the Baldur’s Gate Enhanced Edition Pack on PlayStation 4 includes not one, not two, but three Platinum trophies! There’s one for Baldur’s Gate proper, one for Baldur’s Gate II, and one for the Baldur’s Gate: Siege of Dragonspear expansion. You’re going to be spending dozens of hours with all three to be able to add three new Platinum trophies to your collection, giving you hundreds of trophies to collect between all three lists before you can hear the last “ping” for that last Platinum trophy. There are plenty of trophies that will unlock as you progress through each game’s story, but there’s also a considerable chunk of trophies you’ll have to keep in mind as you play so that you can lower your overall playing time during the different trophy runs you’ll be taking on.

Baldur’s Gate Enhanced Edition Pack is a must-have for Dungeons & Dragons fans old and new. If you’ve played the games before, then you’re going to love replaying them all over again with some quality of life improvements. Odds are you might not have played the Baldur’s Gate: Siege of Dragonspear content, and that on its own will provide you with dozens of hours of additional gameplay. Add the three separate trophy lists, each with a Platinum trophy at the end of the road, and you have a lot of things to do in this $49.99 release, making it a must-have on PlayStation 4. 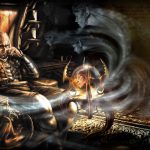 Disclaimer
This Baldur’s Gate Enhanced Edition Pack review is based on a PlayStation 4 copy provided by Skybound Games.

Lost Ember Out Today On PlayStation 4