Columns II is the latest game in the SEGA AGES line. Learn more about this gem of a puzzler in our SEGA AGES Columns II: A Voyage Through Time review!


Columns II was originally released in the arcades in Japan way back in the year 1990. It was later ported to the Sega Saturn in 1997 as part of the Sega Ages: Columns Arcade Collection. It’s now 2019, and we’re finally getting to play the game in this side of the world thanks to SEGA AGES Columns II: A Voyage Through Time, the latest game in the excellent SEGA AGES line on the Nintendo Switch, giving us the definitive version of this gem of a puzzle game to enjoy at home or on the go.

The rules are very simple. You will need to move the puzzle pieces and rotate the jewels that form each piece, rearranging their order to be able to match at least three of the same jewel color either vertically, horizontally, or diagonally. Doing this will remove the jewels of the same color, dropping those above them. When you match at least three jewels from play, there is the chance that those that fall down can also end up creating a match, which will activate a chain, considerably boosting your score. Remove all the flashing jewels on the screen, and you’ll clear the level and move on to the next one.


You’ll move jewels around with the left analog stick or the D-Pad, moving them left or right as needed. If you want to make them drop faster, you can do so by pressing down on either control input. You can rotate the pieces with the A or B (or Y) buttons to move a piece’s layout so that you can more easily match three of the same jewels. That’s all you’ll have to worry about for the game’s controls, which is usually the case for old-school arcade games. 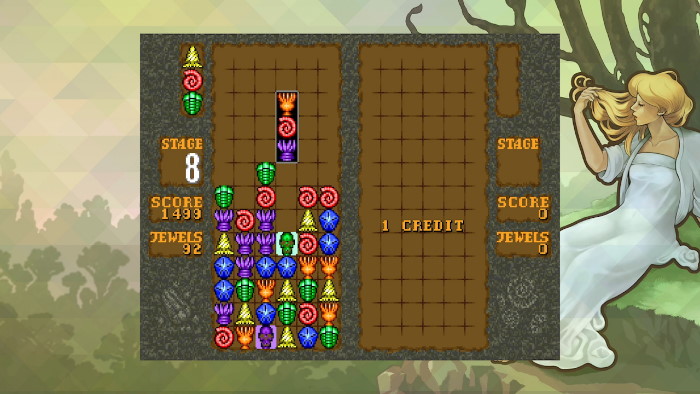 Depending on the mode you’re playing in, sometimes the puzzle pieces will also include magical powers that can be put to good use to clear several jewels. The magic jewel at the bottom of the puzzle piece is the one that dictates what will happen, so do keep this in mind! There’s the Banish magic jewel, which will make disappear all of the jewels of the same color it touches when it lands into place. If you’re playing in local Vs. Columns or are playing an online match, you can also obtain the Down magic jewel that will lower the floor of the playing field by three rows or the Raise magic jewel, which will instantly raise your opponent’s playing field by one row.


Every now and then, a jewel on the playing field will turn into a nasty skull. Skulls are bad because when you end up removing one of them, the floor of your playing field will jump up, which can make it harder to clear the remaining jewels on the playing field, potentially bringing you closer to a game over. Since this is an arcade game, if you fail a stage – which is bound to happen – you’ll need to press the X button to insert a coin within the time limit to be able to continue playing. 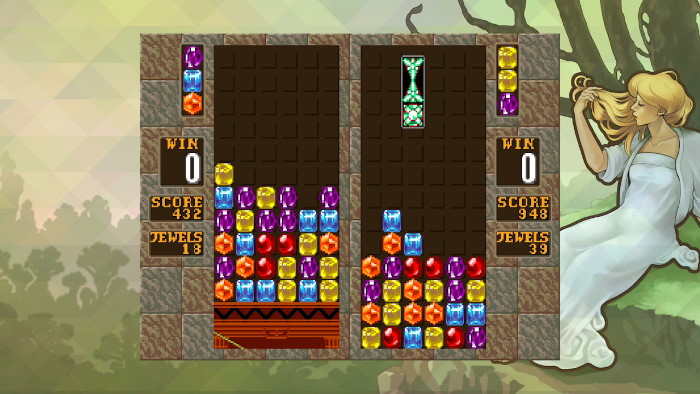 Clear two stages, and you’ll end up with a bonus stage to play. For these, the rules change, as you’ll be shooting jewels up from the bottom of the screen to try and clear out the remaining jewels. You can change the color of the gem you’re about to fire by pressing up or down on the left analog stick or the D-Pad, moving the jewel around the bottom row of the playing field by pressing left or right. It’s a nice change of pace that helps to keep the overall experience feeling fresh. And as you clear the game’s stages, new ring boys and ring girls will pop up in The Jewel Case – they will carry a card that says “Start” before you begin a stage. The first one is Nei from Phantasy Star II, and you can also unlock Mieu from Phantasy Star III, Ramaya from arcade beat ‘em up Arabian Fight, and more.

For the Vs. Columns mode – and for Online Match – you’ll need to not only match three jewels of the same color to stay alive but also match four or more jewels at the same time to be able to attack your opponent and defend yourself. When you match four or more jewels, your opponent’s floor will rise, and if your floor is already raised, it will be lowered. On top of this, the column of jewels that is in play on your opponent’s side of the screen will vanish, screwing up their plans.

The SEGA AGES version of Columns II offers players the chance to play the game in Arcade Mode, getting a faithful reproduction of the original arcade experience, play Columns I, which is an endless mode based on the first game on the series, play against players from around the world in the Online Match mode, or play Infinite Jewels. Infinite Jewels is a new mode that has been created specifically for SEGA AGES Columns II on the Nintendo Switch as an exclusive feature on Nintendo’s hybrid console.

For Infinite Jewels, players will get to try a variant of the Flash Columns option in Arcade Mode, but with a twist. When you remove a flashing jewel, all jewels of the same column will be removed as well as a bonus, and you’ll need to pay attention to what the game throws at you because every now and then a new row of jewels will be added at the bottom of the screen, potentially hurting the combos you were planning. Oh, and there are also no skulls when playing in Infinite Jewels mode.

To configure your experience, you can select what difficulty you want to play in, from Easy all the way up to Hardest. The higher the difficulty you pick, the more rows the floor will rise up when you get rid of a skull. You can also decide if you want to take on the game with the varied jewel styles on offer for each of the stages you’re taking on, or if you want to use the fixed jewel design from the original Columns – you know, where you use actual old-school proper jewels as the components of each puzzle piece.

As is the case for all other SEGA AGES releases on the Nintendo Switch, you can also change how the game is displayed on the TV screen or on the Nintendo Switch’s screen. You can set the display mode to normal, fit, full, dot by dot, or vintage, and combine this with a display effect. It’s set to off by default, but you can also add scan lines for that old-school feel, add a smoothing effect that will make the game not as pixelated, or mix both the scan lines and the smoothing effect for a very interesting look. You can also pick from the different wallpapers you can have displayed around the playing area. There’s also a music player you can use to listen to the music tracks for Columns II.

Disclaimer
This SEGA AGES Columns II: A Voyage Through Time review is based on a Nintendo Switch copy provided by Sega.