This is a double review for Tic-Tac-Letters by POWGI Review. Ceidz and ThaRaven403 played the game, and this review presents what they both had to say.


Tic-Tac-Letters is a single-player logic puzzle based on tic-tac-toe, but with a unique POWGI twist.

Tic-Tac-Letters is a new release in the POWGI series that answers the question: what if you wanted to mix a classic word search game with Tic-Tac-Toe? Each of the 120 levels available in this game features two letters, and your objective is to fill the entire level with those letters.

There are some rules as to how the letters must be set in each grid. The same letter can’t appear three times consecutively horizontally or diagonally (avoiding a Tic-Tac-Toe), and there must be the same number of letters in every row and column. Each row and column must also be unique, which makes this one feel a bit like Sudoku. I like the POWGI philosophy by which games don’t require any knowledge of the English language to succeed, and the different puzzles can be solved by logic alone. 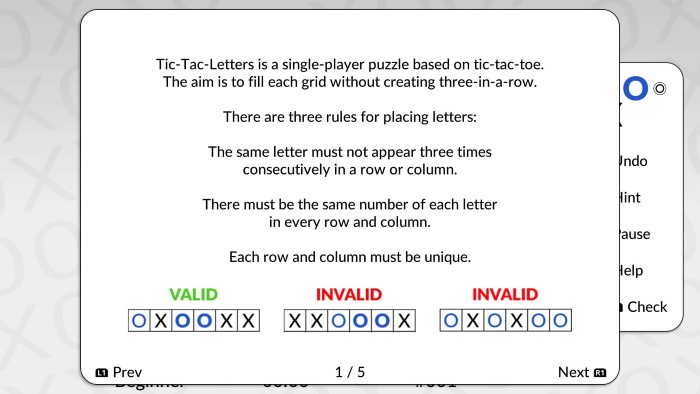 For every level you play, each letter is bound to either the X or Circle button, making this game a very easy one to pick up and play. The gameplay is pretty simple, and once you get into the groove of its logic-based puzzles, you’ll be having a blast. I played the game both on the PS4 and the Vita, and I have to say that I really enjoyed how the controls were handled on the PlayStation Vita.

As for the trophies, the POWGI series are known for their easy Platinums, and this game is no exception to it. Most of the trophies are awarded for completing a couple of puzzles, so if you’re only there for the trophies, you can focus on those and net yourself a new shiny Platinum trophy in roughly 45 minutes, depending on how fast you are, and if you abuse the internal Hint system. 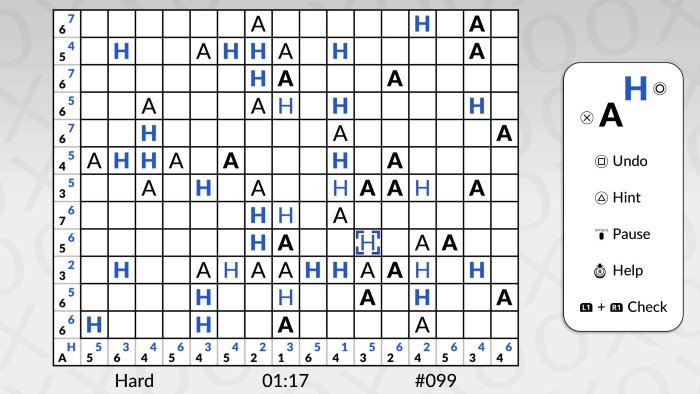 Tic-Tac-Letters is a tic-tac-toe-ish game in which you must fit every empty cell of each grid with the two letters available, which differs from level to level. Once every cell has the right letter for it (ThaRaven403 explained the rules above), the level is completed!

The premise of the game is so simple that this one doesn’t even have a tutorial per se. The game boots up to the different puzzle lists (there are 120 this time), and you can then choose which one you want to tackle. The list is open as soon as you start, so you can effectively take on whichever puzzle one you want. Most trophies are linked to completing a few puzzles in particular, so why not start by playing those? 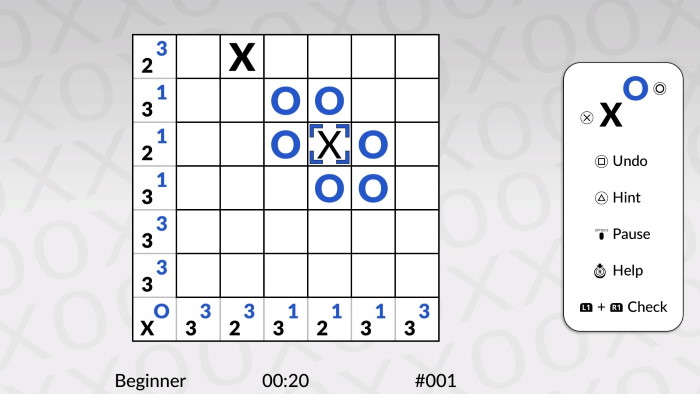 As I began playing, I got a feeling that this release was harder than my favorite POWGI game so far, (which is Fifty Words by POWGI). Luckily once a line (horizontal or diagonal) is correct, it briefly blinks in blue, telling you this setup works. There’s also an in-game hint system that can help you to finish the levels by removing the invalid letters from the grid, which is a good option if you’re ever stuck.


The presentation is what you would expect from a POWGI game. The opening theme is reused from previous POWGI games, and once again, the volume is way too loud and must be turned down in order to be listenable. As for the trophies, you can expect them to pop on and on while you are completing the first set of puzzles in the game, but the others will need you to finish specific puzzles down the road. Cross-buy is included for this one, so players can download the game on PS4 and Vita with a single purchase, aiming for a Platinum trophy. 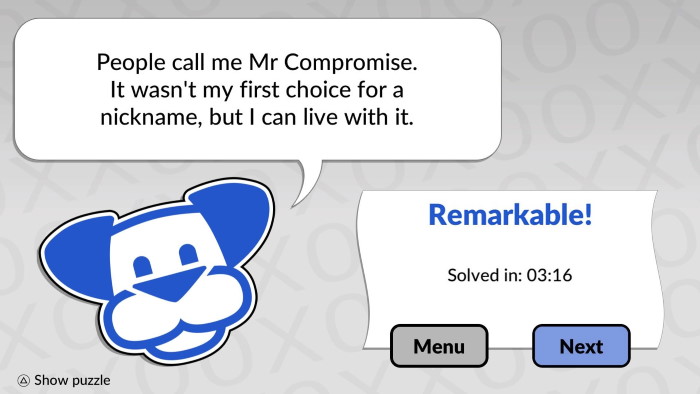 Final Thoughts
Tic-Tac-Letters by POWGI is a new solid entry in the POWGI series, which is building up a nice video game library at a steady pace. Thanks to the addictive and easy to pick up gameplay. We both liked playing through it and achieving new Platinum trophies for our collection. Speaking of which, since this a cross-buy release, you will get the PS4 and the Vita versions, with the chance of getting two new Platinum Trophies for your collection!

Disclaimer
This Tic-Tac-Letters by POWGI review is based on PlayStation 4 copies provided by Lightwood Games.

Bee Simulator Out Next Month