Get into position as you race to the top of the pack in this stylish, fun, and deep arcade racer. Come check out our GRID review!


‘GRID is a racing experience like no other. Offering unrivalled wheel-to-wheel racing, GRID returns with an all-new experience where every race is the chance to choose your own path, create your own story and conquer the world of motorsport.

Take your place in the GRID World Series and fight in thrilling moment-to-moment battles with the most iconic and desirable race cars – current and classic, from GT through Touring and Muscle to Stock and Super Modifieds – and in some of the world’s most iconic locations.

GRID captures every moment of the race, from the adrenaline rush of lights-out to the elation at the chequered flag. Incidents come one right after the other – tight overtakes, bumper-to bumper scrapes and competitive collisions – all heightened by rivalries, team-mates and a nemesis driver who will all either try to help or hinder your progress.

Buy now and get your heart racing.’


Codemasters, the masters of the racing genre, are back with a reboot of the Grid series…. with GRID. This is part of the long-running TOCA series of racing games but has really become its own franchise at this point. I have reviewed both DiRT Rally 2.0 and F1 2019 this year, so I was definitely looking forward to jumping into this one. Both of those games are more simulation-focused and hard as nails, while the Grid series has a more arcade-style feel to it.

GRID itself starts you off quickly by throwing you into events as soon as you load up the game, showing you the variety of types of vehicles you will be racing and the tracks around the world you will be taking on. It starts with you getting into cars in ongoing races and trying to finish them, before quickly moving you onto more challenging scenarios. It gives you a great feel for the control of the game and what each race will feel like. 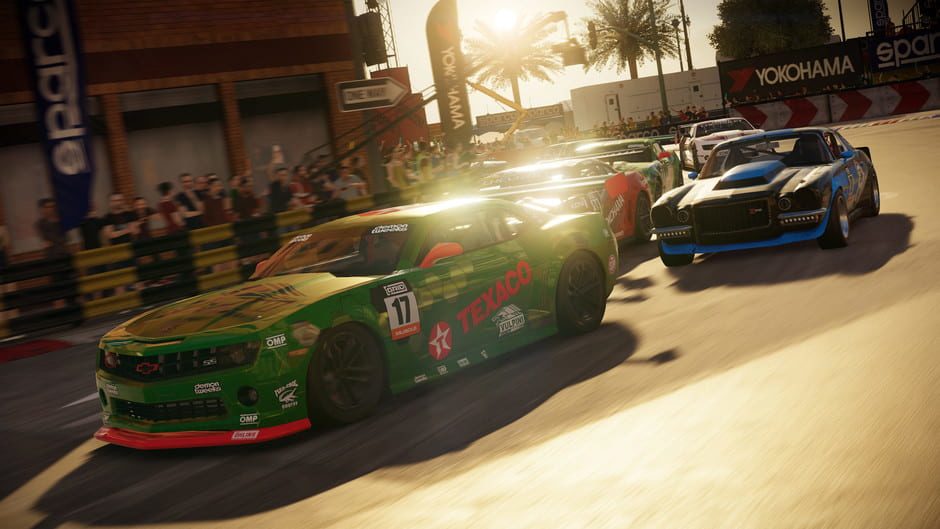 Once you get going and play Career mode, you will see a series of events available in the game. They will include straight-up races and time attack races in which you’ll try to get the best lap time. The types of races are based on the class of car featuring Touring, Stock, Tuner, GT, and Invitation (which will feature other various types that don’t fit into the above categories), and races against famous racer Fernando Alonso. It’s a great mix of 60+ cars to get to play each handling and feeling different.


Moving from Touring to Fernando Alonso races, you can feel the change in speed in the vehicles, and you will need to adjust your playing style, or you will be left in the dust. You have to earn money to unlock the different cars, so you’ll need to start in the easier races since the initial batch of cars are less expensive, but do invest your money wisely as soon as possible since new vehicles will make a big difference in how you perform in subsequent races. The more events you complete, the more money you’ll earn for your efforts.

The track variety is also great with cities from all over the world, including races in Sepang, Sydney, Indianapolis, San Francisco, and even Havana. Each of these has different objectives for you to complete, which usually means you need to race over them a few times before you can find the right way to take on a race. You can race during different times of the day and different weather conditions, giving each race a different feel depending on the conditions. Racing at night in the rain changes how you’ll approach that track, so you’ll need to readjust your strategy. 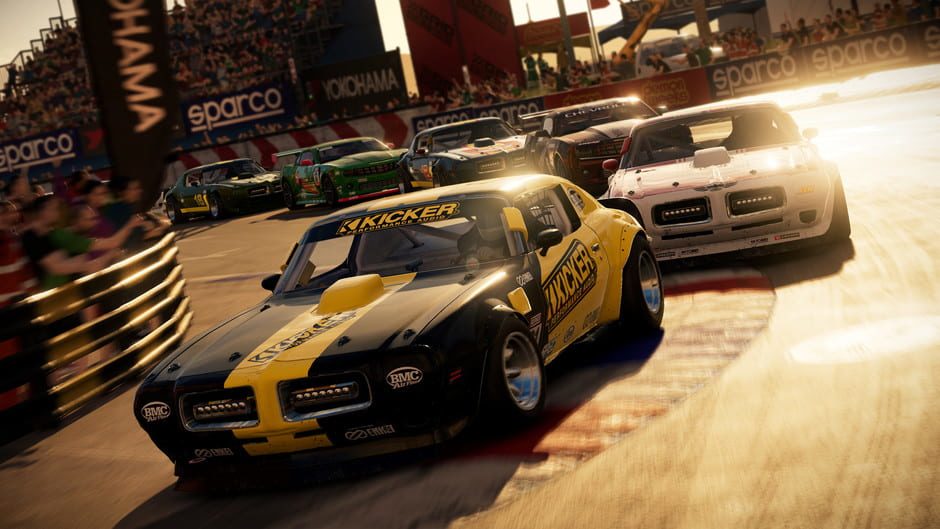 As with other games from Codemasters, this one brings back the optimal racing line… at least for corners. It gives you the optimal angle to take corners while you are racing. It’s also color-coded, letting you know at what speed you need to take them – red means you need to slow down, while green means you are taking it at the right speed. Heed its warnings, as taking a corner too fast will have you sliding off the track or into a wall, considerably hurting your odds of completing the race at a good spot – one crash or one wrong move will put you near the back of the pack, with little hope of catching up.


As you play through the track, you will be rewarded with points for doing different things such as drifting, drafting, overtaking cars, staying on the racing line, completing clean sections of the track, and more. Some of these objectives will actually combo off each other, giving you even better scores. These points will be available at the top of the screen as you play, letting you know what you’ve done and earned. Points are tallied at the end of the race and will make your level go up, unlocking new skin colors for your cars, s well as different customization options for your profile. It’s a great mechanic to keep you moving forward as you try to complete as many objectives as possible.

Also included in this game is a Nemesis system, which is something overdue in racing games. Often while racing early on in the game, I found myself taking corners too fast, crashing into the sides of cars, and this would certainly make those drivers angry. All of a sudden, you now have Nemesis, and this car will be marked accordingly so that you are aware of it. They will now go after you in a different way since Codemasters has included 400 different AI for the drivers, making each one feel unique. I saw how, when a Nemesis was behind me, it would swipe my backside with the front of its vehicle, causing me to spin off the track, hurting my chances of winning the race. 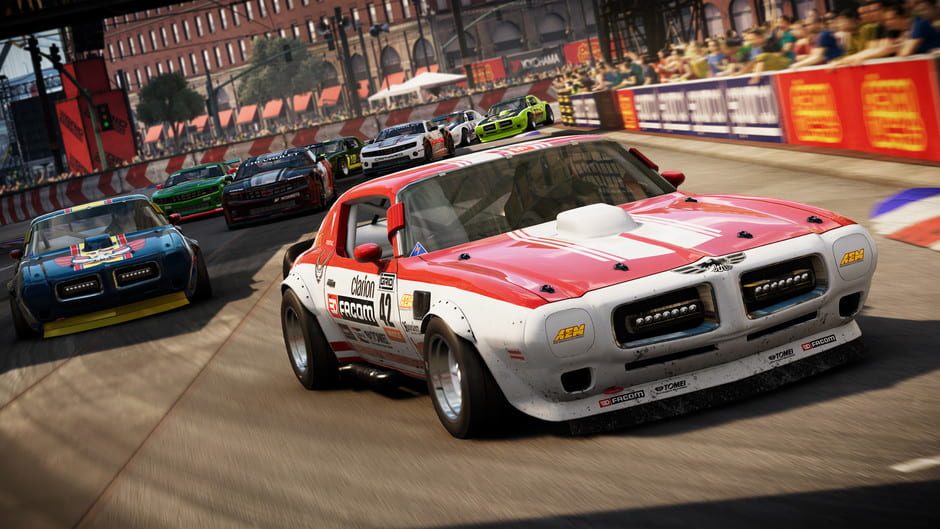 The game itself is a stunner, which was to be expected due to the pedigree of the team. All of the games on this engine have been gorgeous, and GRID is no exception. The way the light bounces off the cars giving off a great shine, the detail in the tracks and the surrounding area is amazing as well, sometimes almost forcing you to take your eyes off the track to look at the wonderful world put together by the team. San Fransisco was a standout level for me as I was racing around the city, seeing the golden gate bridge and racing under it. I was playing on my PlayStation Pro, and the game kept a steady 60 fps with no issues. Unlike other games I’ve played this gen, I didn’t have the option of prioritizing performance over visuals, but the game looked great and kept a silky smooth framerate, so I was really impressed overall – but not surprised.

I’m happy to report that the game plays great online, but it’s, overall, a relatively barebones multiplayer suite when compared to what other racers do with their online component. I know Codemasters knows how to make some great online titles, as I loved OnRush. While those modes wouldn’t have fit in GRID, it would have been great to see some more unique styles of racing available for GRID. 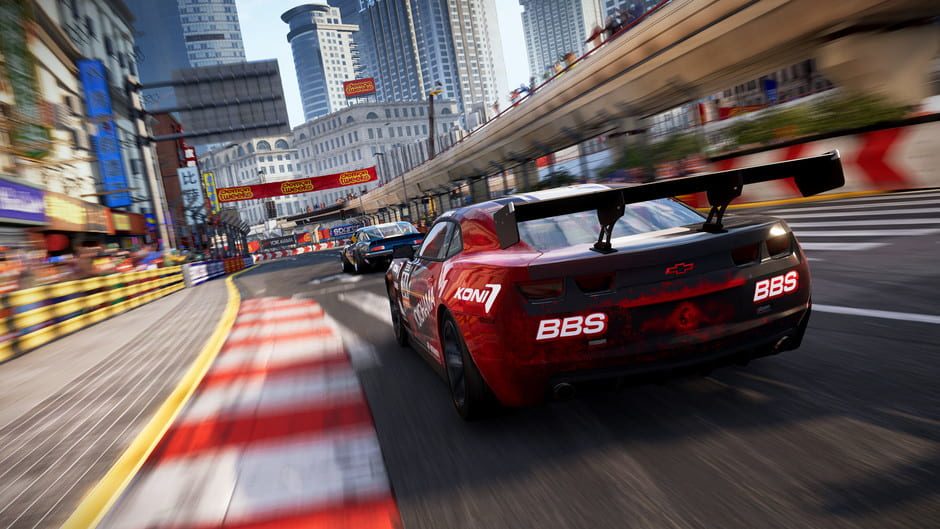 I overall liked my time with GRID. It’s probably the most fun I’ve had all year with a racing title, and that’s saying something with the other titles of played this year. It’s fast, consistently rewarding for your performance in races, punishing you for any mistakes you make. If you end up making other racers angry, you will activate the Nemesis system, earning you some new enemies for subsequent races. GRID is worth checking out, especially for fans of the genre. The one thing I think could be improved is the multiplayer side of things, so hopefully, an update or two down the road will change things.

Disclaimer
This GRID review is based on a PlayStation 4 copy provided by Deep Silver.