Sniper Elite 3 Ultimate Edition from Rebellion is a port of a game that had a PlayStation 4 console release a handful of years ago, as an enhanced version of Sniper Elite 3, which launched back in 2014 on Sony’s PS3. What makes this the Ultimate Edition? Along with the main game, you’re getting all of the DLC included right from the start at no extra cost, which means you’re getting four bonus campaigns – more on these in a bit, along with Nintendo Switch exclusive features such as a local co-op multiplayer mode, HD Rumble support, and motion controls thanks to the features of the Nintendo Switch Joy-Con. 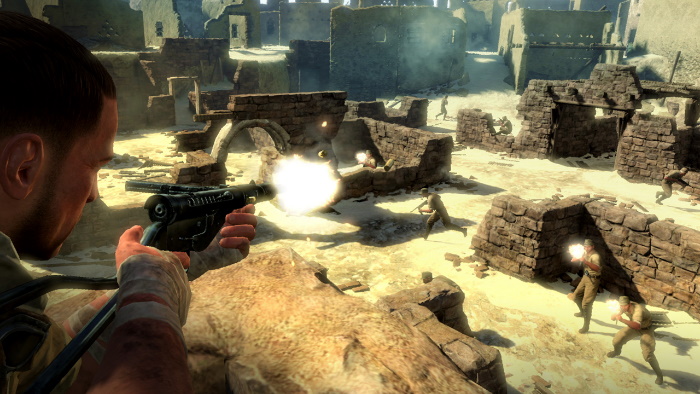 For Sniper Elite 3 Ultimate Edition you will be controlling OSS agent Karl Fairburne who is back for a new set of missions, this time set in 1942 in North Africa. Your mission’s main goal is to sabotage a Nazi super weapon that is too powerful to allow it to be used in World War 2. You’ll need to use stealth to your advantage, taking out your targets from a safe distance as much as possible, as you take on the Afrika Korps, the German expeditionary force sent to Africa during WW2 to fight for the Reich. Making good use of traps will also keep you safe, so that enemy soldiers don’t try to sneak up on you when you’re trying to line up the perfect shot. 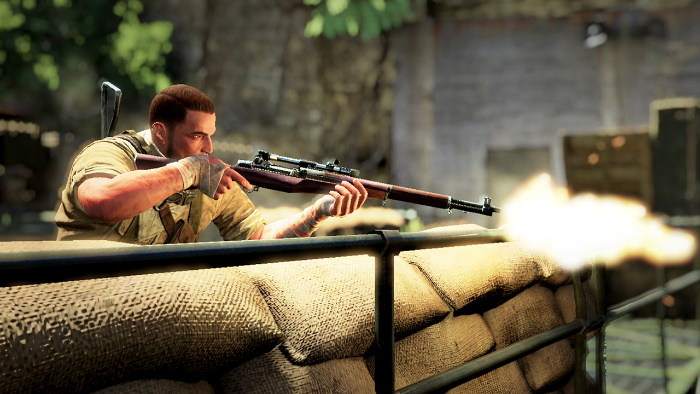 The controls for Sniper Elite 3 Ultimate Edition have you moving your character with the left analog stick, sprinting by pressing down on the stick. The right analog stick is for swinging the camera, and if you press down on the right stick you can activate your binoculars to have a closer look. You can change your stance with the B button, and take aim by pressing and holding the ZL button. Once you’re set you can fire away with the ZR button. If you need to reload your weapon, you can do so with the Y button – this button can also be pressed and held down near enemy soldiers to search their bodies for items or ammo. You can also select to use the motion controls of the Nintendo Switch Joy-Con by activating this feature, which is set to off by default.

Since sniper is right in there in the game’s name, you can zoom in and zoom out with your rifle by pressing up and down on the D-Pad. Your character breathes in and out, which will mess up your aim while snipping. To keep this from happening, you can empty your lungs by pressing the R button so that you can have a steady aim and take the precise shot that you need for the job. You will also collect some items to help you with your mission. You’ll select these by pressing left and right on the D-Pad, using them with the R button. 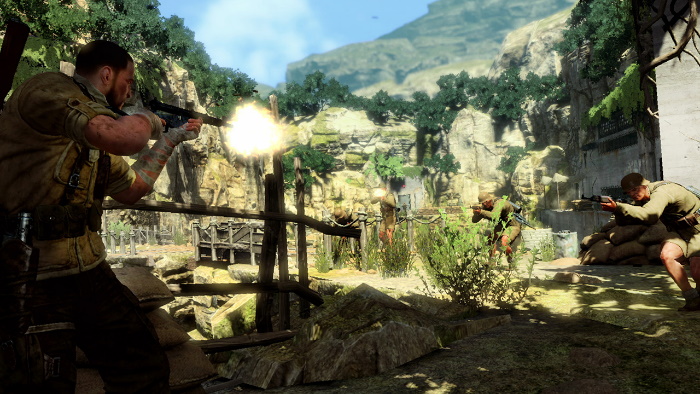 Before you take on this new game, you can select between the four difficulty options, or come up with a custom version that will allow you to find a combination of elements that feels just right. The regular difficulty options are Cadet, in which the challenge is lower and there are no bullet ballistics; Marksman, the regular option in which bullet ballistics are simplified and enemies are out to get you; Sniper Elite for which enemies are tougher, you fight with realistic bullet ballistics and friendly fire is on; and Authentic which should be reserved for those who are experts at the game since you will need to be very good to make any progress since you can’t save. 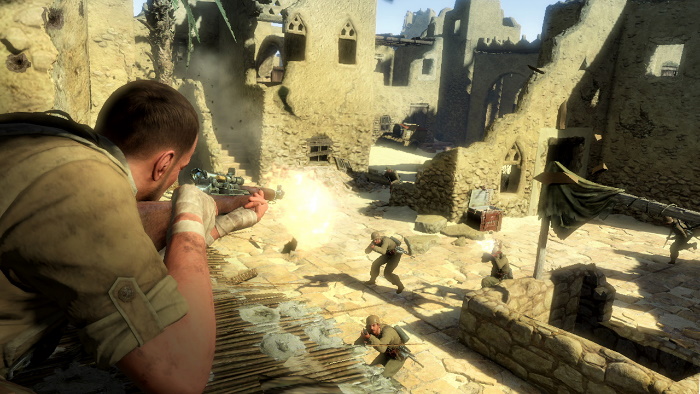 A good tactic during your time with Sniper Elite 3 Ultimate Edition is to treat enemy soldiers as if they were zombies in The Walking Dead: if you want them to go down as fast as possible and stay down, aim for the head. Making the most of elevated spots where your opponents can quickly reach you is definite a good choice as well, so that you can try to put a bullet through the head of each soldier foolish enough to come within your deadly range. If they get too close to you, you’re going to be in a lot of trouble, so be sure to keep your current general position unknown to your enemies. 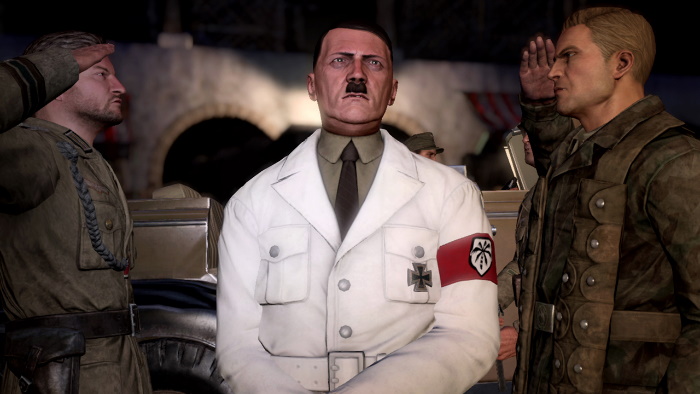 Going back to the additional DLC content that is available for Sniper Elite 3 Ultimate Edition right from the start, I want to talk a bit about each of the bonus missions you can take on. They’re located inside of the Campaign menu, listed under additional missions. The first one is Hunt the Grey Wolf, in which you are to infiltrate Tobruk finding the Führer. The other three – In Shadows, Belly of the Beast, and Confrontation – are part of an overall story arc in which you are to protect Winston Churchill after a plan to assassinate him is uncovered.


Sniper Elite 3 Ultimate Edition runs great on the Nintendo Switch when played in Docked, Portable, or Tabletop mode, with a dynamic resolution when in Docked mode that hovers around 900p with some dips into 720p territory and everything in betweent, with Portable and Tabletop mode diving into 720p territory, with occasional dips into 600p-ish land. As you line up shots that will prove to be fatal for your opponents, you will get to see things in gruesome detail thanks to the game’s X-Ray kill camera in which you’ll see how each of your bullets exits your weapon, ripping into an enemy’s bones and internal organs – something you can decide to turn off if it’s not your thing. 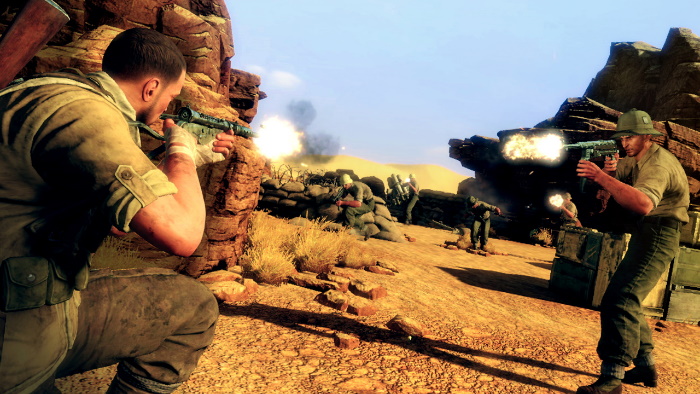 When you add the main campaign and all of the bonus DLC missions you will complete in Sniper Elite 3 Ultimate, you’re looking at over 15 hours of content. Add the local and online multiplayer options, and you’re certainly in for a treat. This makes it very easy to recommend Sniper Elite 3 Ultimate on Nintendo Swich thanks to its budget $34.99 price tag.

Disclaimer
This Sniper Elite 3 Ultimate Edition review is based on a Nintendo Switch copy provided by Rebellion.

Mario & Sonic at the Olympic Games Tokyo 2020 Out Next Month